THE EPISODE: The end of episode 6.

THE ROMANTIC MOMENT: During the aftermath of an earthquake, Yoo Shi-jin ties Kang Mo-yeon’s shoes in a moment of selfless, charitable love.

Descendants of the Sun was not a drama I expected to love as much as I did. Mostly because I went in expecting a military/medical drama. And while those are important elements of the show, it’s more a romantic drama than anything else. Plus, Descendants of the Sun meshes together so many different genres (including “disaster flick”) that you can’t really categorize it.

The most compelling part of the series are the romances, especially the central love story between Captain Yoo Shi-jin (who belongs to special forces) and Dr. Kang Mo-yeon. As the two find themselves in the “fictional” country of Uruk on separate peacekeeping missions (one as a soldier, the other a doctor), they find another chance for love despite their previous missed opportunities with each other. And in the midst of their developing feelings, disasters of every kind (near-death experiences, natural disasters, kidnapping, trafficking, etc.) threaten to tear them apart. My chosen moment focuses on a scene of selfless love in the midst of one of these disasters.

This type of charitable, selfless love has become a rare quality in love stories today. Romance shouldn’t just be about attraction and “big” moments. Love is also about what you do for someone else. Love is a verb and requires “work.” But what I love about the romance in this series is that it points out what’s wrong (unintentionally I believe) with love stories that have become too politically correct.

In other words, just because a “woman” can save herself, or just because she can open her own door, does that mean she always has to? Is there anything wrong with helping each other? Serving each other? Is there anything wrong with lifting the burdens of the person you love, if only in small ways? For this week’s romantic moment, I explore one of those moments of selfless love sure to lift the spirits of anyone who watches. 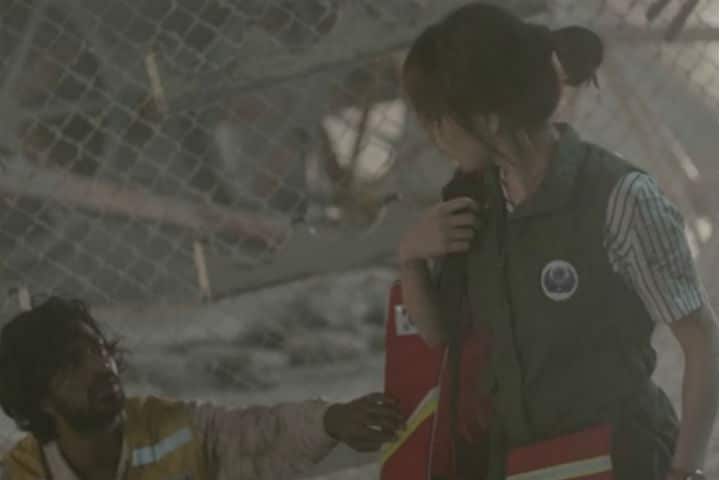 In the aftermath of an especially devastating earthquake, Mo-yeon helps a man hurt in the quake. Earlier, when she rushed to the disaster scene, she didn’t think twice about the fact that she wasn’t exactly dressed for the occasion. With only fancy dress shoes with heels to wear, she ran around helping as many as she could well into the night. 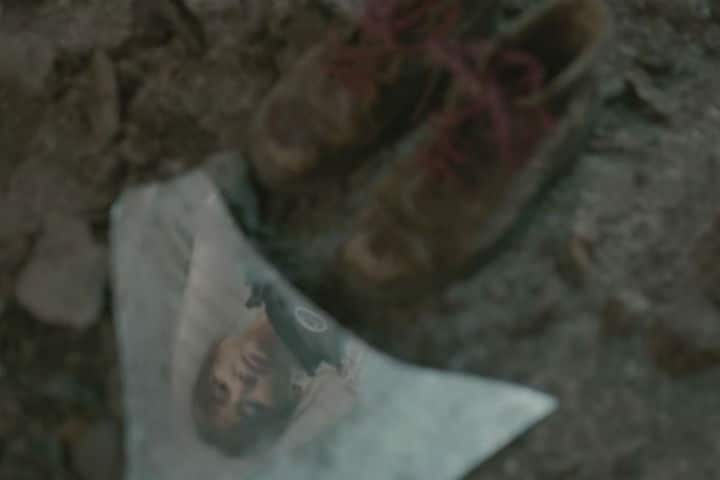 In this quiet moment between Mo-yeon and this man, he notices her bleeding feet. He grabs her hand and then in a moment of charity offers her his boots to wear so she can continue to help others without continuing to injure her own feet. She gratefully accepts the shoes. 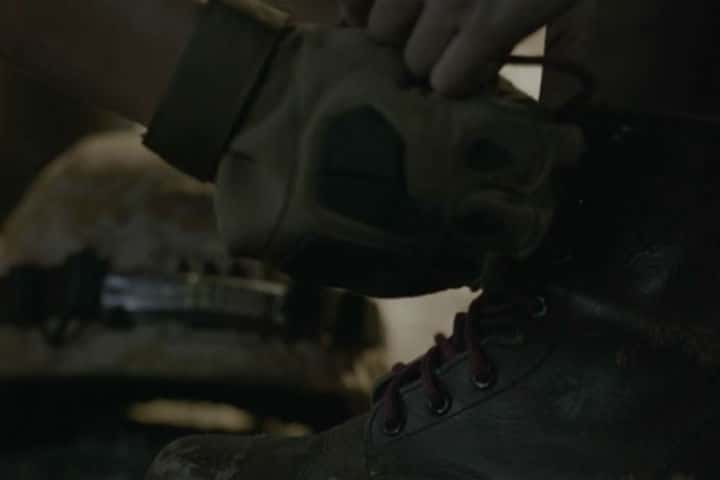 In the early morning, after helping more and now exhausted, Mo-yeon looks down to find her “new” shoes untied. She leans down to tie them. And just as she’s about to start, Yoo Shi-jin appears like a white knight. 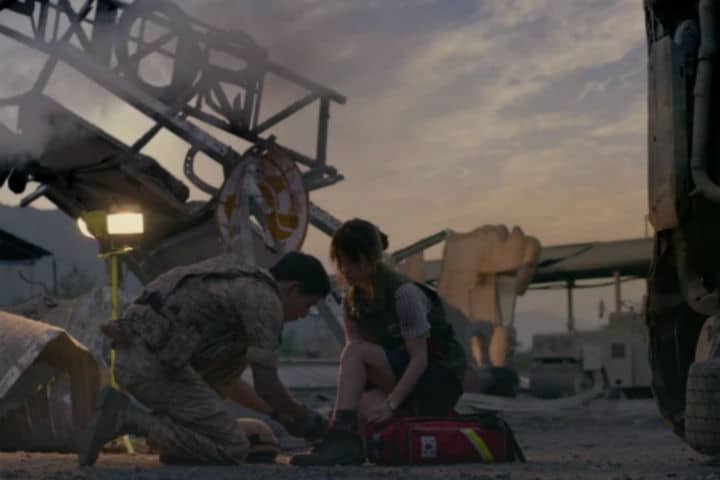 He takes her shoelaces and begins to tie them without saying a word. 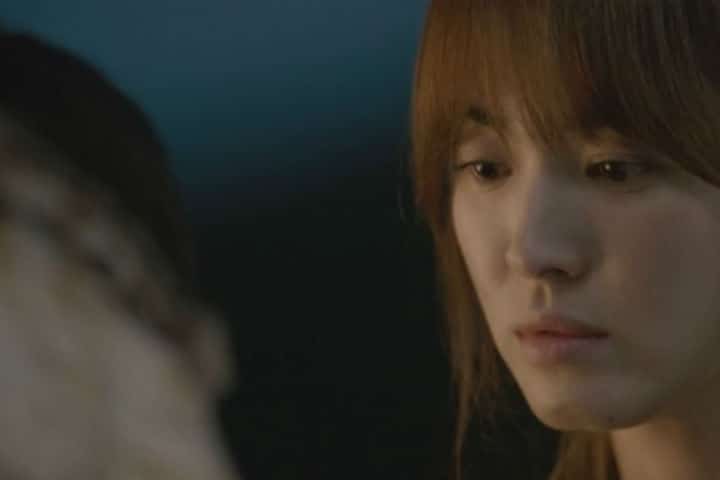 She watches him, curious and even surprised, by his thoughtful gesture. All the while, he chooses not to look into her eyes until he’s done. When he finishes, the two stand and stare at each other for a few meaningful moments. 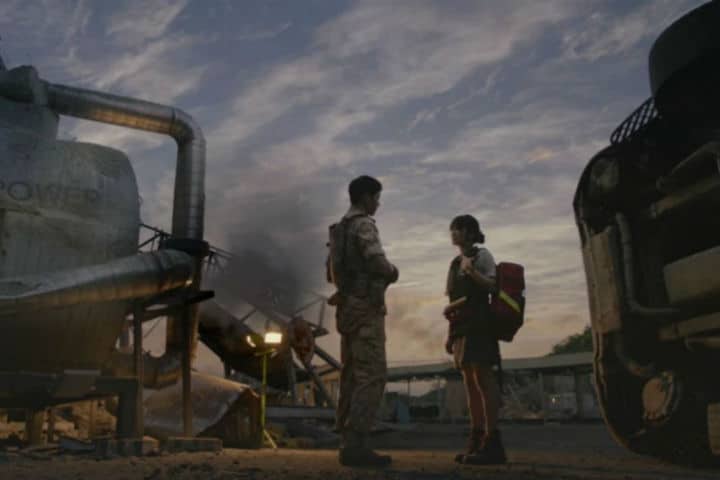 “I had hoped you weren’t hurt,” he says, breaking the long silence. He then confesses to his earlier regret of leaving without seeing her face. And while it’s obvious they’d like to spend more time together, they each must continue to work in the rescue effort.

Before the two part ways, he continues to offer his support.

“I can’t be by your side, so, please…take care of yourself.”

“You too, Captain,” Mo-yeon replies. 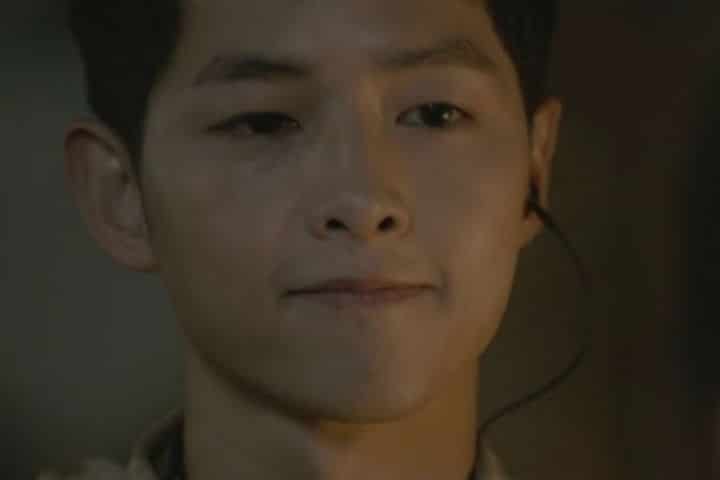 Shi-jin smiles, full of emotion, and slowly walks away from her. He puts his helmet back on as the two walk in separate directions, back to the where they’re needed in the relief effort. All the while, the moment becomes more emotional as the song “Always” by Yoon Mi Rae.

And with that, the scene (and episode) ends on a screenshot of the two. The sweet moment leaves you rooting for them and anticipating the next episode.

Have you seen Descendants of the Sun? What did you think of this romantic moment? Let me know in the comments!

Our romance-themed entertainment site is on a mission to help you find the best period dramas, romance movies, TV shows, and books. Other topics include Jane Austen, Classic Hollywood, TV Couples, Fairy Tales, Romantic Living, Romanticism, and more. We’re damsels not in distress fighting for the all-new optimistic Romantic Revolution. Join us and subscribe. For more information, see our About, Old-Fashioned Romance 101, Modern Romanticism 101, and Romantic Living 101.
Pin this article to read later! And make sure to follow us on Pinterest.
By Amber Topping on April 15th, 2017