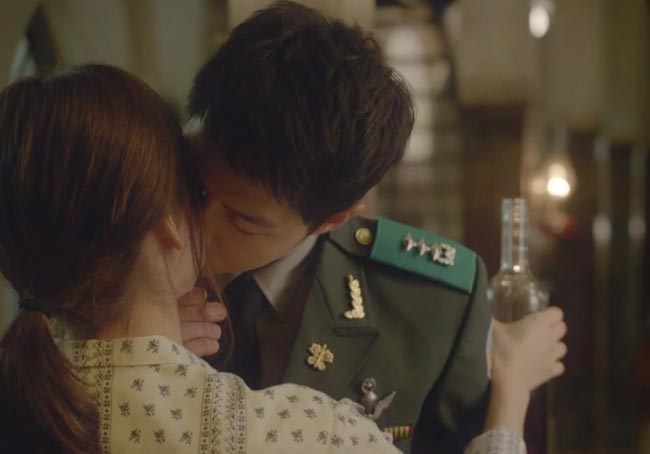 Descendants of the Sun Review

Not too long ago I posted a review for My Love From Another Star, a K-drama that rocked ratings and fans’ hearts including my own. Earlier this year, a new ratings giant emerged: Descendants of the Sun. A rare fully pre-produced K-drama, Descendants was highly anticipated for almost a year. When it aired simultaneously in China and Korea, the ratings blasted through the roof. Halfway through the season, Descendants had already reached ratings higher than My Love From Another Star’s highest rated episode. Descendants of the Sun became instant K-drama gold! Though I didn’t immediately start on the drama, once I received emails from a friend in raptures over the disaster-romance drama, I knew I had to watch it pronto. Of course, I fell in love.

RELATED My Love From Another Star Review – A Romantic Korean Drama

The story follows Kang Mo-Yeon, an ER doctor, who crosses paths with a handsome, charismatic young man, Yoo Shi-Jin, who takes an interest in her. When Mo-Yeon learns that he’s a Special Forces soldier, she’s no longer certain that a relationship could work between them. Fate is working on their behalf, though, as Shi-Jin is deployed to a (fictional) European country, Uruk, and Mo-Yeon joins a group of humanitarian doctors there. The sparks fly between Mo-Yeon and Shi-Jin… just as terrible disaster strikes.

There is honestly so much packed into Descendants that the short synopsis doesn’t cover it. There’s ER drama, action, special ops, an earthquake and disaster, several romantic storylines, epic bromance, and of course a spunky doctor and a smooth soldier.

I totally believe the strongest point of Descendants was the ensemble of solid actors. Song Joong-Ki, who thankfully signed on for this drama after finishing up his mandatory 21 months in the Korean army, brings empathy and warmth to the role of Captain Yoo Shi-Jin. Kang Mo-Yeon is played by the very capable Song Hye-Kyo, who returned to drama land after three years (she’d been filming movies during that time). She gives her character a real strength that is believable.

One of my favorite things about Descendants is the lack of major K-drama tropes. Shi-Jin isn’t a stereotypical macho hero but a layered person. Mo-Yeon doesn’t fall under the pushover “nice” heroine trope. She’s calm, intelligent, independent and knows who she is. Secondary heroine Yoo Myung-Joo isn’t another bratty, self-absorbed girl who wants the main hero. Instead, she’s an Army physician with an epic love line of her own – with Captain Yoo’s best bud, Seo Dae-Young. Really, the secondary love story is just as memorable and fascinating as the leading one.

There’s so much humor, wit and memorable moments crammed in this drama. Even with the disaster side of the story, Descendants is often quite lighthearted despite the dark elements of the story. The drama delivered a thrilling story – making me almost cry at a few poignant moments and leaving me on the edge of my seat as the heroes faced life and death situations. Also, the show was mostly filmed in Greece which gives us a stunning backdrop!

The drama isn’t without its flaws. Many of the more dramatic elements are quickly resolved, sometimes taking away any deeper impact. The “doctor” side of the story often feels over-the-top and fictionalized. People are horribly injured and then seemingly fine within a short span of time.

I have loved none but you.