THE ROMANTIC MOMENT: Cole telling Cassie he’s saving the world for her.

When you’re a time-traveling duo bent on saving the world from a pandemic virus and the unraveling of time, there isn’t much time (ha ha) for romance. So, the little moments become all the more intense. A stolen glance, the brush of fingers, or brief conversations with a subtext that makes your heart pound. Amid a complicated plot involving time travel and the unraveling of time, 12 Monkeys features a complex relationship between two people who are more than just torn apart by time.

James Cole is a time traveler from 2043. He travels or “splinters” back in time to 2013 to enlist the help of Dr. Cassandra Railly, a brilliant virologist. After convincing Cassie of the existence of time travel and the post-apocalyptic world he comes from, she joins his crusade. They are an unlikely duo. Cole comes from a world where only the ruthless survive. Cassie comes from a world of privilege. Together, they chase after the creator of the virus with one goal: eliminate him.

This romantic moment takes place towards the end of Season 2 of 12 Monkeys. By this point, Cassie and Cole’s relationship is at one of its lowest points. Much of this has to do with how they changed during their time apart. At the end of Season 1, Cole is forced to send Cassie into the future to save her life. As a result, Cassie finds herself in a post-apocalyptic world where her inexperience could mean her death. She learns to survive and becomes more ruthless. Left behind in Cassie’s original time, Cole begins to re-examine his methods. He begins looking beyond the surface of a quick fix.

When 12 Monkeys reunites Cassie and Cole, they immediately clash. While their goal is the same, their methods are vastly different. It’s Cassie who is ready to take a life while Cole argues for a different way. In the end, Cole convinces Cassie to do things his way. While she agrees, it leaves them at odds. Cassie doesn’t believe she can trust Cole. For his part, Cole is having difficulty reconciling this new Cassie from the woman he met in 2013. They fight each other as much as they do the forces at play. Thus, the tension between them escalates.

Cassie is sent back in time to a pivotal event in Dr. Katerina Jones’ life. Her mission is to eliminate Jones, the creator of time travel. She and Cassie believe that without time travel, the current threat to the world would cease to exist. When Cole finds out, he is determined to stop Cassie before she erases their meeting in 2013. When he arrives at the same destination, Cassie believes she was successful in her mission; however, they soon discover the day was reset.

Over and over, Cassie attempts to eliminate Jones. Then she attempts to save Jones’ daughter’s life. Nothing she does works. It keeps resetting. Cole attempts to convince Cassie to approach this a different way, but she refuses. He also refuses to go along with her plan. As a result, they fail to function as a team. Cassie grows wearier with each reset. Her mission is eating her up inside. Jones is her friend and each time she pulls that trigger, it kills something inside Cassie. Cole is worried as he sees the affect this mission is having on Cassie. Finally, Cole convinces Cassie to wait out the day to see if by doing nothing, they will return home.

As they wait for time to reset or send them home, Cassie and Cole share what is perhaps the most real conversation since reuniting. The cost of this life is clearly taking a toll on Cassie. Cole keeps searching for some way to break through to her. He sees her unhappiness and regrets how hard she’s become. Even more, he regrets bringing her into this world. So, during a lull in the conversation, Cole confesses he too would go back and undo things he’s done.  His tone is regretful. 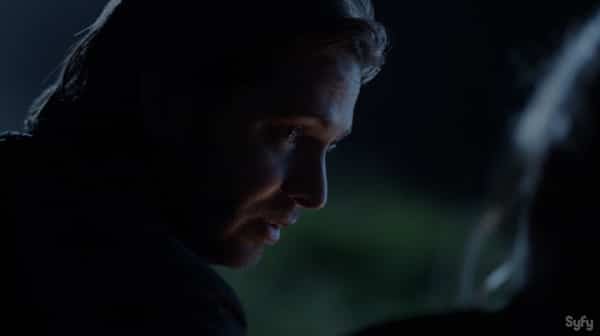 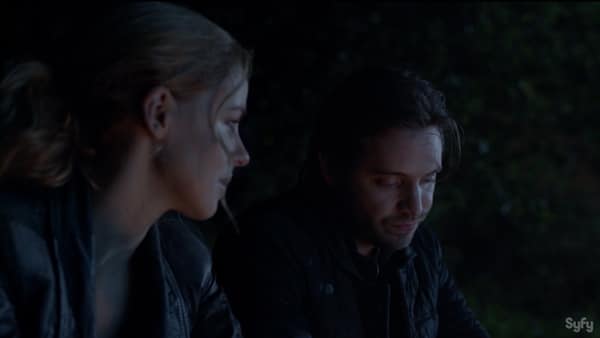 When Cassie softly asks if he would give up the mission, Cole nods. Cassie stares at him for a moment, surprisingly moved by the sentiment. She doesn’t know what to say. For a brief second, there’s tenderness on her face as she looks at Cole. However, she shakes it off. Buries her emotions. She shrugs as she remarks that she only had a few years left anyway.

Cole gives her this incredulous look.

“Yeah, but in those years you could have some real happiness. And that’s better than a lifetime of this.”

Cole truly wants that for her and it’s heartbreaking he believes Cassie could only have that happiness if they never met. At the same time though, he’s completely ignoring Cassie’s freewill. It didn’t matter that he came into her life. She could have chosen to never meet him again. She made a choice. A choice that she alone is responsible for. Cole’s guilt frustrates her. They’ve talked about this before and yet, he still blames himself for her choices. She says as much to him. There’s heartbreak in her tone and pain. And so much weariness. 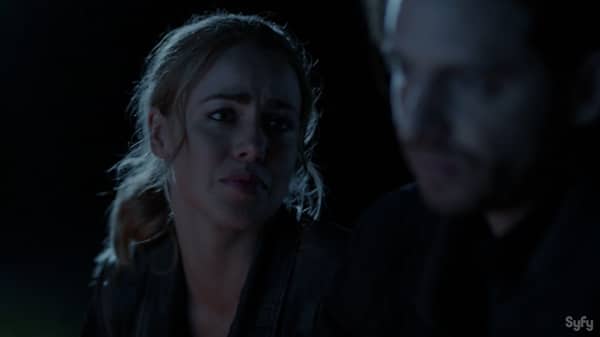 “Go find another purpose. Go save the world.”

“To hell with the world!”

This set’s Cassie off. If he doesn’t care about saving the world, then why is he here? Why does he care so much? 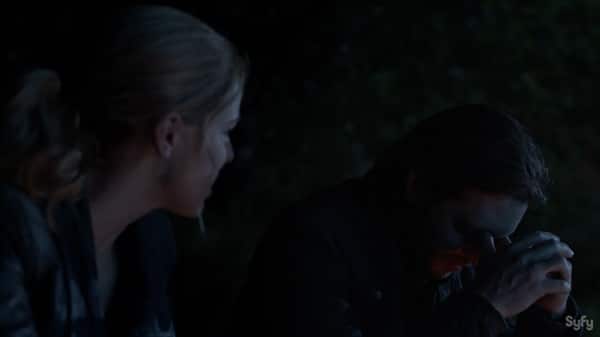 Cole presses his fingers to his eyes as Cassie demands to know why this is so important to him. There’s so much frustration in her voice and Cole can’t believe she is asking him these questions. 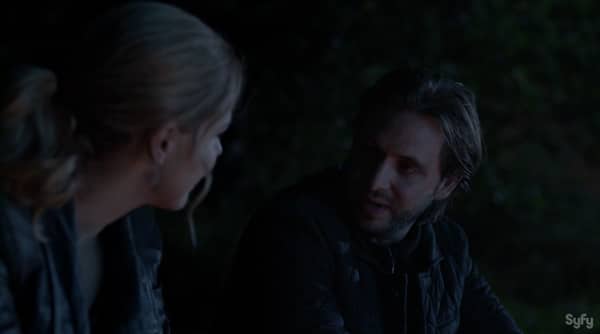 Cole huffs a laugh. He can’t believe that Cassie doesn’t get it. Perhaps, it’s because she doesn’t want to. Cassie would have to open her heart to understand. After enduring experiences that would break a far weaker person and the losses she suffered, Cassie has closed herself off. But Cole won’t stay silent. He would change it all for her because it’s not about saving the world. It’s about Cassie and saving her from what this life is doing to her. More importantly, it’s about how Cole feels about Cassie. 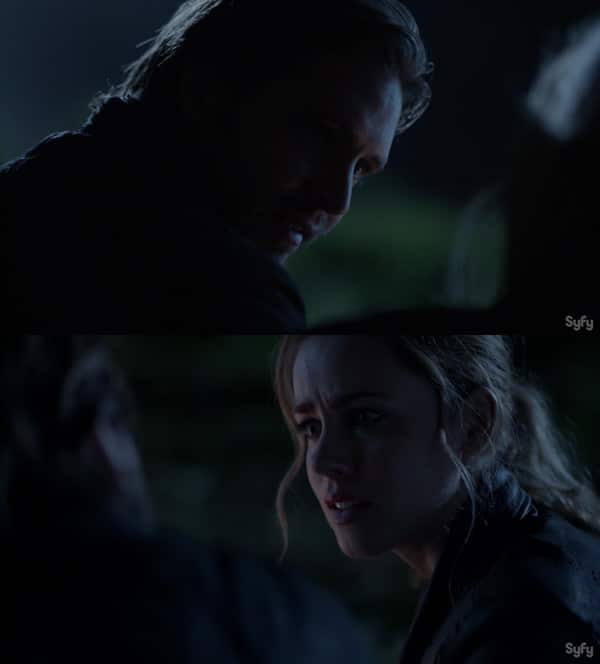 “The only world I gave a damn about was the one with you in it.”

Cassie is speechless. It’s the closest Cole has come to telling Cassie he’s in love with her. She can’t look away from him despite these emotions being the very one she fears. She doesn’t want to hear what he is saying. Yet, she needs to hear it.

Cole isn’t finished, though. He may as well tell Cassie the last truth inside of him.

“All this…….everything I’ve done? It’s been so that you have a place to go back to. That’s it.”

Cassie’s expression softens as she stares at him in silence. She is terrified of what he is telling her. What it means. It’s obvious she is fighting an internal battle, one she’s not sure she wants to win. This is Cole. 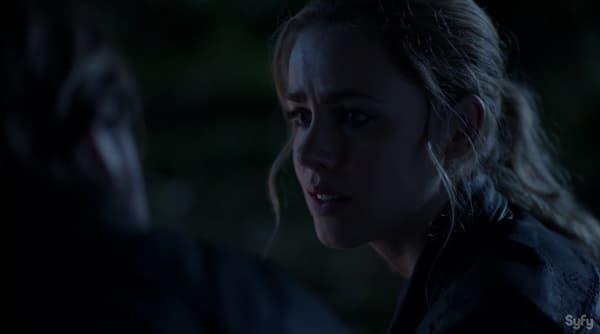 Cole stares back at her, an intensity in his gaze. Does she understand? Does she get what he’s saying? That the words he can’t speak out loud are buried there in the sentiment? 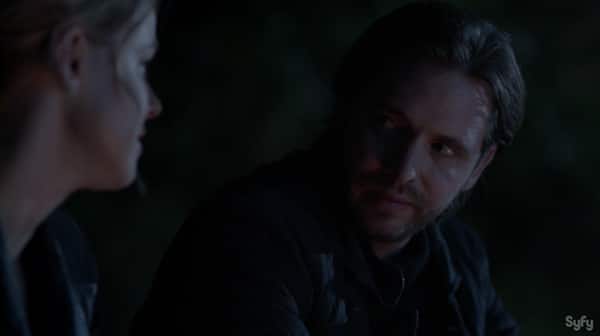 They stare at one another for a long moment. However, before either can say anything else, time comes sweeping in and resets the day. Again.

12 Monkeys loves to toy with our hearts. After a heartbreaking episode in more ways than just Cassie and Cole’s relationship, the show drops another angst-filled moment. Cole slips his hand over Cassie’s and she rubs her thumb against his knuckles. He whispers her name. This is it. This is his chance. Cassie, emotionally wrung out and vulnerable, warns Cole that there will be losses. However, for someone like Cole who has never had that once chance at happiness, it’s worth it. He replies with a breathtaking romantic sentiment that all but sends Cassie into his arms.

“I’d rather have that moment and lose it….than die never having had it all.”

Unfortunately, Cassie fears loss so much she won’t let herself surrender.

“This can’t happen,” Cassie whispers and she pulls her hand away on a sob, leaving him where he stands.

Are you a fan of Cassie and Cole? Do you have a favorite romantic moment? Sound off in the comments below!

Related Post | Gentlemen Out of Time (Why We Love Them)

Seasons 1 and 2 are available to stream exclusively on Hulu. 12 Monkeys is rolling out Season 3 in binge form. The first four episodes aired Friday, May 19th. The season continues with three episodes on Saturday and the final three on Sunday. Happy binging!

Our romance-themed entertainment site is on a mission to help you find the best period dramas, romance movies, TV shows, and books. Other topics include Jane Austen, Classic Hollywood, TV Couples, Fairy Tales, Romantic Living, Romanticism, and more. We’re damsels not in distress fighting for the all-new optimistic Romantic Revolution. Join us and subscribe. For more information, see our About, Old-Fashioned Romance 101, Modern Romanticism 101, and Romantic Living 101.
Pin this article to read later! And make sure to follow us on Pinterest.
By Catherine on May 20th, 2017

2 thoughts on “Romantic Moment of the Week – 12 Monkeys: Cassie and Cole”