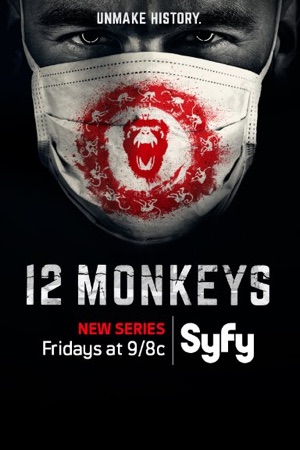 SyFy’s taking advantage of the new virus craze this year, first with Helix, and now with it’s newest series, 12 Monkeys. But in this show, time travel is also added to the mix in this reprisal of Terry Gilliam’s 1995 film of the same name.

Aaron Stanford plays James Cole, a man, who, in Terminator style, is sent back from the year 2043 to the present in order to prevent the outbreak of a deadly plague that will occur in 2017. In present day, Cole finds prodigy scientist Cassandra Railly, played by Amanda Schull, and has the difficult task of trying to convince her that first, he’s not crazy, and second, that she must help him prevent this plague from devastating mankind.

Playing the role of shadowy bad guy is Tom Noonan, although we’re not quite sure just yet what kind of threat he poses. The show is also full of mysterious clues suggesting that the problem of the plague may be much more complicated than Cole has been lead to believe, and that it may all lead to an elaborate conspiracy encompassing forces no one could have guessed at. It seems Cole may be in far over his head, and preventing the plague may involve much more than just the medical world. Thanks to writers Terry Matalas and Travis Fickett, the tone of the show is very dark and tense, making it a good match for its timeslot companion, Helix.

The show also covers quite a number of genres here. 12 Monkeys includes a dystopian future, a deadly plague, and time travel. Have I covered it all? That makes for a pretty jam-packed show in my opinion. You certainly don’t need to worry about getting bored watching this show. If anything, it can be difficult to keep up with what’s going on at times, what with the frequent jumping between time periods. It can get a bit disorienting keeping track of where exactly a scene is taking place. Hell, you might want to keep notes while watching it, just to keep things straight.

While the show is certainly gripping, my question is how long the producers will be able to keep up this kind of intensity? I also wonder if audiences will have the patience to stick with a show that can be rather exhausting and at times confusing to watch. Either way, I’d say it was certainly an entertaining start, and something I’d suggest checking out just for the shear amount of content you’ll see in one sitting. We’ll just have to keep watching to see if it has staying power and can keep up with it’s initial energy.

What did you think of 12 Monkeys? Do you think it has staying power? Sound off below…

Interested in SyFy’s other series featuring a deadly virus, Helix? Check out our review here.

Our romance-themed entertainment site is on a mission to help you find the best period dramas, romance movies, TV shows, and books. Other topics include Jane Austen, Classic Hollywood, TV Couples, Fairy Tales, Romantic Living, Romanticism, and more. We’re damsels not in distress fighting for the all-new optimistic Romantic Revolution. Join us and subscribe. For more information, see our About, Old-Fashioned Romance 101, Modern Romanticism 101, and Romantic Living 101.
Pin this article to read later! And make sure to follow us on Pinterest.
By Rebecca Lane on January 19th, 2015