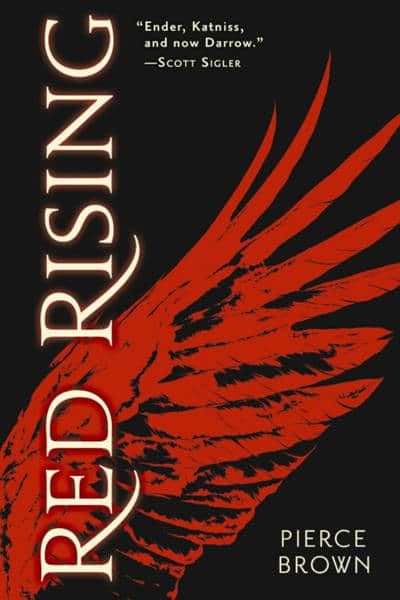 Every time I read a book that takes my breath away (or is it ‘mind away?’), I create a tagline I imagine is sure to catch my friends’ attention and force them into reading the book. I figure if I say the right things, I will basically trick them into at least picking it up. So sometimes I exaggerate and say it’s better than their favorite book, but for Red Rising, when I say it’s better than the Hunger Games, I’m NOT lying!

My Obnoxious But Carefully Crafted Tagline:

“This book is like LOTR, Star Wars, Hunger Games, Harry Potter, Ender’s Game and Game of Thrones combined into one, so dystopian, plus sci-fi and space, but it’s still original! And it’s better than the Hunger Games.”  I might be biased, but I think it’s one of my better taglines since it makes the victim, I mean, my friend, more susceptible to reading it. I mean, now that you’ve read that, you’re going to go read the back of it at a bookstore at the very least.

More Details to Convince You To Read This:

Red Rising is the story of Darrow, a sixteen-year-old Red boy on Mars. I know what you’re thinking: A male narrator who’s 16? If he’s not Augustus Waters-level deep, I’m not in! But no fear. Darrow is a great narrator, an awesome protagonist, and very feminist-minded on account of his wife, Eo. I know what you’re thinking again. He’s already married?! Where is the romance?! No fear my friends, NO FEAR. If you have read any of my articles you know that I consider myself to be someone overly invested in romance. I basically eschew all novels and movies that don’t have romance (and yet, I love them deeply when forced to watch them. Shawshank Redemption, or Foyle’s War, anyone?) so this book definitely had enough, but I will say it’s not primarily a romance. WHICH I LOVED. The type of book it was can best be described by the following one-liners:

In this dystopian world, we are in space, and societal ranks go by color! Golds are the rulers of society, at the top, and Reds are at the bottom as unskilled laborers. Yellows are scientists and doctors, Grays law-enforcers, Obsidians warriors, Silvers businessmen…and so on with interesting divisions and colors assigned to different classes. It’s hard these days to create a good dystopian society with all the dystopias being written now, but Darrow’s society is one of my favorites as it is structured differently, and well.

RELATED Illusions of Fate by Kiersten White is a Gorgeous Read!

Darrow is a miner living in sad conditions, always scrambling for food for his family, where the struggle is actually real for him. But he doesn’t mind much since Reds are told they are the pioneers on Mars, and that their mining colony is paving the way for more people to begin to live on Mars. In his mind, a noble task. And he loves his wife a lot, so he’s ignorantly content. That is until he finds out that this is a huge lie and they are basically slaves while all the other colors live a fancy life in other cities on Mars. Messed up, yo. MESSED UP.

From there, Darrow is chosen to join a rebel group as their mole to become a Gold and infiltrate society, rise up and then demolish the unjust hierarchy. It’s basically if Katniss pretended to be from the Capital so that she could befriend Pres. Snow and then lead a rebellion, which sort of happened anyhow. I thought Red Rising was better than HG because it has a deeper backstory, a more developed future world, better friendships, and Darrow was cooler than Katniss. I think it would make a better movie. However, I do think Woody Harrelson should be in both movies (you’ll see which character if you read it). You should take me seriously about this because I read HG before the hype (it’s true, ok!) and I am an ardent fan of it still.

To become a full-fledged Gold and a member of the “Peerless Scarred” who are the ruling members of the Gold society, you must get into the Institute (Darrow undergoes extensive training and a makeover, which I always love reading about) and be physically and mentally fit. Then you get sorted into Houses (whoa, feeling the HP? Don’t worry, it’s not the same) when Roman/Greek proctors choose you. By that, I mean the proctors are named Mars, Athena, Pluto, etc, and you’re chosen based on where you best fit. I loved this! I felt a nice little Percy Jackson vibe in there. Then, all the students live in the secluded wilderness with their housemates and have to fight to become the dominant House so that at the end of the year they can get the best internships and apprenticeships. It’s all about power and networking!

There’s corruption everywhere, but also great friendships to be found. Plus, the students have to find fire and food and weapons and it’s all very exciting and scary. Are your friends your enemies? What’s the best way to steal food and horses from a rival house? What do you do to surprise another house in an all-out war? Is this awful game more than just a game? Darrow is selected for House Mars, and he becomes an expert tactician in the merciless faux-war that the students are forced to play in the Institute. It’s reminiscent of Hunger Games in that the proctors can also be sponsors and send medicine/tips, and that there are cameras in the arena. To be the Dominant House you’ve got to conquer the other Houses and claim them as slaves/to be your army. The book really takes off with this excellent plot. In addition, Darrow’s internal struggles balance the action as he hides his huge secret among his Gold enemies he begins to see as friends. Though he wants to hate them for the oppression of his people, he can’t fully do so, and that leaves him questioning what exactly should be done to save his people (giving us a lot more reading material for the next 2 books in the trilogy).

Red Rising is a trilogy that is, in my eyes, pretty perfect.

In addition to the world-building, the sci-fi, and the heart-pounding plot, the characters were written impressively well. There’s a lot of character building for Darrow, and since he too is new to the world the book is set in, none of it is confusing or difficult to follow. I especially loved all of the political treachery throughout the planet system, and I thought it was so innovative of Brown to set the series on the planets in a future where Earth is too populated and so humans use other planets to live on. I liked that he made society dystopian mixed with Roman aspects of society (by that I mean a lot of nobility, betrayal, honor, and killing). Maybe I’m a creep, but I quite liked reading about all the intricate war planning that went on while Darrow and his House fought for dominance in the game…the characters all struck me as intelligent.

Red Rising really lived up to the hype for me…it totally blew me away. I haven’t been so impressed since Melina Marchetta, or Soman Chainani. Pierce Brown won the Debut Goodreads Author award in 2014 for Red Rising and the Best Science Fiction Goodreads award in 2015 for the sequel, Golden Son. Also, he’s crazy good-looking in addition to his brilliance and good humor, so I hope another great author finds him soon and they marry and write beautiful books together. If he’s anything like Darrow then he’s even more of a super hottie. Is that a weird thing to say?

To make good on my promise that it is similar to the following books, here are my reasons why:

I hope me pointing out these similarities won’t turn you away from the book – I swear, the worldbuilding is so dense that you can’t deny originality. I love when good books remind me of other good books, it means they share amazing qualities!

Red Rising is a trilogy that is, in my eyes, pretty perfect. The writing – fantastic. Plot – kept me up all night. Characters – deep, and hilarious. (I haven’t mentioned any by name because I don’t want to spoil anything and because this review is already quite long.) Worldbuilding- well done. I also think film rights were secured for an adaptation!  I found it in the adult section of my library, which made it even better since I should try to read more adult books. However, content-wise, if you’re not afraid of the gory-ness of Hunger Games then the content won’t be too adult for you. I think it fits into both YA and (New) Adult equally well. I hope you read it!

Content Note: There is violence in the book as well as a reference to rape (though not explicitly described). There is also some profanity.

I remain convinced Red Rising is one of the best reads of the last few years. Have you read this? If so, please chime in below so we can give it the intense discussion it so warrants!

Our romance-themed entertainment site is on a mission to help you find the best period dramas, romance movies, TV shows, and books. Other topics include Jane Austen, Classic Hollywood, TV Couples, Fairy Tales, Romantic Living, Romanticism, and more. We’re damsels not in distress fighting for the all-new optimistic Romantic Revolution. Join us and subscribe. For more information, see our About, Old-Fashioned Romance 101, Modern Romanticism 101, and Romantic Living 101.
Pin this article to read later! And make sure to follow us on Pinterest.
By Amirah Yasin on May 24th, 2016