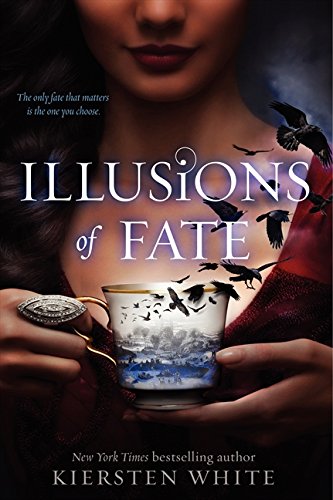 Illusions of Fate by Kiersten White is described on Goodreads as “Downton Abbey meets Cassandra Clare in this lush, romantic fantasy.” Take a break from this review so you can immediately go and put this book on hold because it is as gorgeous and enjoyable as promised!

“I did my best to keep you from crossing paths with this world. And I shall do my best to protect you now that you have.”
Jessamin has been an outcast since she moved from her island home of Melei to the dreary country of Albion. Everything changes when she meets Finn, a gorgeous, enigmatic young lord who introduces her to the secret world of Albion’s nobility, a world that has everything Jessamin doesn’t—power, money, status…and magic. But Finn has secrets of his own, dangerous secrets that the vicious Lord Downpike will do anything to possess. Unless Jessamin, armed only with her wits and her determination, can stop him.

JESSA: I do hate this gray place I have forced myself to live in. But I love this crow. Crow! Come to me! I shall dub you “Sir Bird” and you shall be my only friend! To you alone I shall dispense my intelligent wit. I am the best heroine you’ve read about in a while!

SIR BIRD: I am a lot more intelligent than I let on. Because, magic. But ok. I will be your friend and defend you against the more evil inner workings of this society which you will soon experience. I am really quite honorable.

FINN: Hey Jessa, I’d love to hear your intelligent wit. I have some of my own. We might get along! Plus, I love crazy bird-talking girls who are maddening, wield knives, and don’t let me have my way! For I am the mature and understanding man of everyone’s dreams. I am also a little bit similar to Will from Clockwork Prince and everyone loves him.

JESSA: Ugh, not me. I just dream about the sun. I hate colonialism. I prefer Sir Bird to you!

In this fantasy-historical romance (best of both worlds!), we are introduced to Jessamin Olea, a young woman who has left her home in the island colony of Melei behind to pursue higher education in the dreary country of Albion. Her mother was a Melenese woman, and her father an Albion man who now teaches anti-Melenese teachings at the university she studies at. She has dark skin and dark hair in this country of nobles and fair-skinned people, and it made me at first think of Belle. Which again, was a reason to go on reading. Her father, who is also her professor, does not acknowledge her and she stands out as half-Melenese in society. Though Jessamin hates Albion for viewing her island culture as “savage,” she is determined to stay for the education, bitterly resenting the country and its people all the while. I thought this was interesting in that Jessamin herself resented Albion for its ethnocentric views, but she herself was ethnocentric towards them. She’s living with a cousin and working as a servant when she meets the mysterious and very young Lord Finn Ackerly one day and becomes unwillingly drawn into the noble’s world of power and magic. There’s a power-hungry villain, a lot of birds, mentions of drinking tea, magic, a charming gentleman and a very funny best friend involved. All of which are elements to a very lovely read.

Plot and circumstance aside, Jessa’s character made me swoon.What nabbed me from the first page was her self-deprecating humor. She’s confident and funny, but not without her own insecurities. Her resolve to face them head-on is what really made her such a strong, gorgeous character.  Jessa is unapologetically honest and forthright with herself, and everyone. For example, when on the run from a dire situation: “I saved my own life. You are simply keeping me company on this leg of my escape.” It’s something readers and Finn appreciate about her. Often in a novel the main character is special especially because of their recently discovered magic powers. But Jessa has no magic other than her own wit, and to me, she was the most “special” of all. I would either like to be Jessa or I wish that I could have written a character like Jessa. Kiersten White truly penned Jessa’s first person narration endearingly well.

Eleanor, Jessa’s friend, was just cheeky, and in her role as an underestimated gossip, she shone. Her lines kept me cracking up. Jessa’s the star of this novel, but Eleanor was a glowing ball of fire. I think I would also like to be Eleanor, self-aware and butting into people’s business or teasing my friends endlessly. I liked that Jessa’s friendship with Eleanor was an important aspect of this novel; it was an essential component that gave us more insight to Jessa’s character and allowed for hilarious scenes.

The best part about the romance between Finn and Jessa was that it hit all the cheesy notes – a ball, a fabulous gown, hiding in armoires together, solid amounts of rescuing, confessions of jealousy – but it was not overly done or, in fact, cheesy. The author avoided insta-love quite well, even though it was there for Jessa’s taking. Finn bonds with Jessa on a magical molecular level (his soul just ‘takes to hers’ soon after meeting, which is pretty romantic) but she does not ever view this as a reason to now fall in love with him. It’s not so much as imprinting as it is recognizing a kindred spirit. And if two kindred spirits fall in love, then that’s super amazing! I loved every minute of their interactions. Sometimes when reading YA novels it’s almost as if you’re reading a parody as you read scenes about heroines being swept off their feet and kissing at balls, but when reading those scenes in Illusions, they were nothing but enjoyable.Her attitude about love is so empowering: she can live with or without it, but chooses what she wants. Finn was mature, cute, and a good match for the headstrong Jessa. I would say that Finn was swoon-worthy, but I actually think Jessa was the swoon-worthy character in the relationship. She flusters him and it’s quite adorable. I’m itching to explain why, but in light of spoilers, I’ll just say it made their romance unique and one of my favorites.

“He follows my eyes and curses, then slides his hands beneath my legs and back. “What are you doing?”
“Picking you up so we can run!”
“Don’t be daft, my hand is broken, not my feet!”
“Right, that was stupid. Stupid.”

A good novel can’t be without a barrage of clever banter, and any book that throws around words like “daft” or “dastardly” regularly is one I’ll be invested in. I will admit, the plot was not intricate or spell-binding, but this book was a standalone and just a very good read on a day off. The plot is simplistic but clear-cut, and the book focuses more on humor, romance, and character. I honestly preferred it that way; it was nice not to get lost in a world of deep magical fantasy for once.

YA authors often consciously emphasize their heroines’ active presence and their hand in choosing their own faith. Especially since Twilight and those criticisms of Bella (whether you agree with them or not), we’ve been given a slew of heroines who never back down and always do what they want. Sometimes even to the point of extremity, where it often hurts others. Jessamin in Illusions of Fate is the kind of heroine I’d like to be. Obviously, she’s super fierce, but she also crashes into carriages and whatnot from time to time. She’s stubborn, humble, sharp, funny, and susceptible to romance, making her relatable to all of us. She’s staunch but admits to her weaknesses. I loved her, and quite honestly all the characters from this novel were superb. The presence of the name Finn, a name in so many good fantasy and contemporary YA novels I cannot even list them all, was also a strong indicator of how good this book was. However, Sir Bird was possibly the strongest character of all, and a huge highlight of this book because, in his role as a cute, non-verbal bird, he stood against the patriarchy and evil magic overlords!

Illusions of Fate was such a good fantasy and historical romance that I want to shelve it for rainy-day rereads. What are your thoughts? Comment below!

You can buy Illusions of Fate

on Amazon or Barnes and Noble!

Our romance-themed entertainment site is on a mission to help you find the best period dramas, romance movies, TV shows, and books. Other topics include Jane Austen, Classic Hollywood, TV Couples, Fairy Tales, Romantic Living, Romanticism, and more. We’re damsels not in distress fighting for the all-new optimistic Romantic Revolution. Join us and subscribe. For more information, see our About, Old-Fashioned Romance 101, Modern Romanticism 101, and Romantic Living 101.
Pin this article to read later! And make sure to follow us on Pinterest.
By Amirah Yasin on October 18th, 2015

1 thought on “Illusions of Fate by Kiersten White is a Gorgeous Read!”