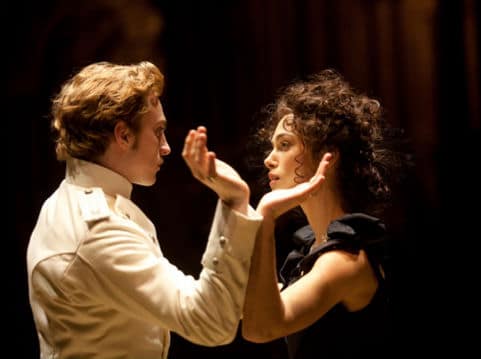 The best word for the 2012 production of Anna Karenina is theatrical, in this case both literally and figuratively. The director, Joe Wright, has much of the action play out on an actual stage and portrays the story of Anna Karenina in such a way as to be reminiscent of a stage play. It is a passionate and tragic story of love versus propriety.

Anna is happily married, or so she thinks, with a young son. She receives a letter from her brother asking her to come and convince his wife, Dottie to forgive him for dallying with the children’s nurse. On the train journey she meets Countess Vronsky, who introduces her to her son, Count Alexei Vronsky. This chance meeting begins a story of deception, passion, heartbreak, propriety and society. Anna will have to choose between the world she is familiar with and something she never knew she was missing.

The most striking aspect of the film is its unique visuals. The use of the stage as a framing device cleverly explores the ongoing public scrutiny which society ladies were subject to. Joe Wright could have done as Moulin Rouge did and left it at that, opening and closing with the rise and fall of a theatre curtain. However, it is not simply begun on a stage but also employs many creative ways of storytelling. A man rips up a piece of paper throwing it up in the air and then it begins to snow, actors are frozen up in the rafters of a traditional theatre which becomes a train station when they begin to move, and clerks at an office move in such a way as to make it appear like a complicated dance. The movie was filmed mostly in an atmospheric, decaying old theatre and much is done with little. Obviously this experimental visual storytelling will not appeal to everyone. Those looking for a straight adaptation of the story may be a little put off by this. I do urge that you give it a chance though and approach with an open mind.

Joe Wright also directed the 2005 version of Pride and Prejudice and uses some of the same actors. Keira Knightly and Matthew MacFadyen are reunited, this time not as lovers but as brother and sister. Jude Law turns in a performance that deviates from his usual roles as the stern, deeply moral Karenin. Then there is Aaron Taylor-Johnson as the the morally ambiguous Count. There are many who doubted Johnson’s ability to play Vronsky as it is a role which requires someone less boyish (the unnecessary wig does not help). And while he had previously shown his worth in such films as Nowhere Boy and Kick Ass, I’m inclined to agree that he was not the best suited for this character. He plays it well, however.

There are many other talented supporting players as well such as Olivia Williams, Kelly MacDonald, Emily Watson, Michelle Dockery and Ruth Wilson (as Princess Betsy looking very unlike herself).

As to the romance, while passionate, I did not really feel convinced that it was a love that would tempt a good woman away from her family even if she did not love her husband. This may be because the chemistry between the two leads was not very strong. There is, however, a sweet love story between Kitty (Alicia Vikander) and Levin (Domhnall Gleeson) which plays second fiddle to the main affair. In fact, there is a lovely proposal scene involving wooden letter blocks.

In keeping with the impressive visual quality of the film, the costumes are beautiful with much commendation going to the designer, Jacqueline Durran. Most of the characters wear costumes that appear to fit the period. Keira’s costumes, however, have elements of ’50’s couture which make her stand out. This helps emphasize her outsider status when she makes the decision to break free from society’s rules and then endure the consequences.

Some have criticised this adaptation for focusing on the love story and dispensing with the political aspects of the novel. Given the nature of the film, and the book’s length, I understand why this was done. Still, the social commentary is not completely lost. For instance, the hypocrisy of society is made starkly clear when she is shunned, not when she has started the affair but when she leaves her husband to live with her lover publicly. You are allowed to behave badly as long as you ensure that appearances are kept up. Also, we see how her brother’s indiscretions are treated very differently from her’s simply because he is male and she is not. Dottie is expected to forgive while Karenin is not.

As far as the storytelling, the foreshadowing is frequent and is done well so as to create good build-up of tension. Overall, Anna Karenina is a visually striking, well done period drama that is worth checking out as long as you prepare yourself for an adaptation which is far from perfect.

Content Note: The film is Rated-R and has some adult content, but overall, the film is more artistic than vulgar.

Our romance-themed entertainment site is on a mission to help you find the best period dramas, romance movies, TV shows, and books. Other topics include Jane Austen, Classic Hollywood, TV Couples, Fairy Tales, Romantic Living, Romanticism, and more. We’re damsels not in distress fighting for the all-new optimistic Romantic Revolution. Join us and subscribe. For more information, see our About, Old-Fashioned Romance 101, Modern Romanticism 101, and Romantic Living 101.
Pin this article to read later! And make sure to follow us on Pinterest.
By Elinor Cackett on December 3rd, 2015