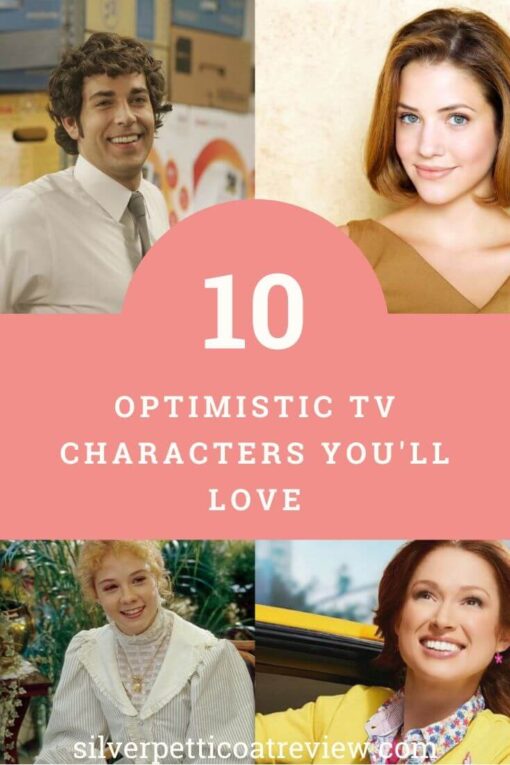 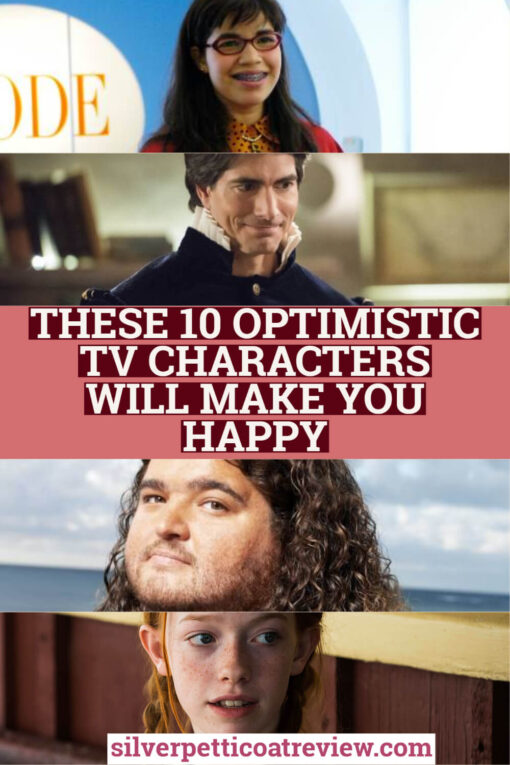 From Chuck to Anne Shirley, these are some of the most bright and optimistic characters from television.

Because I grew up watching Shirley Temple movies, I’ve always loved cheerful and optimistic characters who find the best in people. They see under the outer shell and know just how to bring a smile to your face. Even the surliest of grumps love a likable optimist!

Accordingly, here are ten optimistic characters from television to watch and cheer you up in these challenging times.

(In no Particular Order)

Why can’t a gang ever be a bunch of good guys?

I admit Ray Palmer is one of my current TV character crushes and is a real ray of sunshine. He’s like watching Captain America every week – but with more joy and playfulness.

Played by Superman himself, Brandon Routh brings total goodness to another superhero character. Ray first appears on Arrow and then transitions over into leading man status on Legends of Tomorrow for the first five seasons (until his recent polarizing and unnecessary departure).

As he travels through time with a crew of misfits, he finds purpose as he helps save the world. Ray is perhaps the purest example of optimism on this list, and he even falls in love with a villain and then wins her over with his optimistic sweetness.

Yes, he’s cheesy (in the best way), and he’s probably not realistic, but he is pure fun to watch. Ray’s good morals and high spirits are sure to make you happy.

Look I’m not buying the whole Scrooge act. Underneath that spy cover is a regular person, just like the rest of us.

Who doesn’t love Chuck? Zachary Levi plays the accidental spy with charm and relatability. Chuck wins over the hearts of villains, professional spies, and everyone around him. His sweet idealism and yep, optimism, is sure to bring a smile to anyone who watches this hilarious spy rom-com series. Plus, the romance with Sarah and Chuck is perfect.

You can take my bunny, but you can’t take my spirit!

Betty holds onto her optimism and magazine career goals amid bullies who would bring her down for being different. Based on a telenovela, Ugly Betty is also heavily influenced by Beauty and the Beast. Betty is the true “Beauty” at the fashion magazine and finds a way to see the beauty in everyone around her – including villains.

If you haven’t watched this award-winning comedy series, now is a perfect time. Betty and her family (and all the characters at Mode Magazine) will steal your heart. Plus, Ugly Betty is hilarious and will have you in stitches from start to finish.

ANNE SHIRLEY, ANNE OF GREEN GABLES/ANNE WITH AN E

Tomorrow is always fresh, with no mistakes in it.

Both versions of the Anne Shirley character capture optimism in different ways. Megan Follows’ Anne is more optimistic, sunny, and romantic in the traditional sense. Her interpretation is also closer to the dreamy Anne of the novels.

I’m loved now, but when I wasn’t, it didn’t mean I wasn’t worthy of it.

Anne Shirley, Anne with an E

On the other hand, AmyBeth McNulty’s Anne shows how it’s not always easy being an optimist amidst life’s hardships. Anne has PTSD but survives through hopefulness and finds joy in seeing the good in others – though she makes huge mistakes along the way.

Both Anne adaptations will move you for different reasons. Anne of Green Gables will lighten your mood and fill you with happy nostalgia while Anne with an E will break your heart – showing there is not just one way to be optimistic in this world.

Don’t believe everything you see and only half of what you hear.

Sara Stanley (played by a young Sarah Polley) hails from the Emmy-winning Canadian ‘90s series, Road to Avonlea. A spinoff of Anne of Green Gables, Sara moves to the town of Avonlea as she grows up with the cousins, aunts, and uncle she never knew.

The heartwarming period drama series has a similar optimistic feel of its predecessor and even includes some of the same characters. Still, Sara is not Anne. Sara, while optimistic, has had a better upbringing than Anne did but must now face new challenges when her wealthy father’s accused of embezzlement.

Still, Sara faces her trials with courage and finds a way to connect to the lonely characters around her. She’s quickly nicknamed the story girl, and if you watch, you’ll understand why. Not only is she a brilliant and gifted storyteller, but she also finds a way to discover the stories of the people around her. And that’s a beautiful thing we should all learn from in today’s cynical world.

Overall, Road to Avonlea is a hopeful series, but it never feels overly saccharine or inauthentic. It’s a beautiful show for people of all ages to watch and enjoy.

Just Take It Ten Seconds At A Time. Everything Will Be Okay.

Played by Ellie Kemper, Kimmy Schmidt is a character with an unbreakable spirit. Despite being kidnapped for many years, she finds a way to come out of it with an optimistic view of the world still intact. Sure, that doesn’t mean life is easy for Kimmy, but she keeps going with a smile. If you’re in the mood to watch a comedy series, this is a great pick!

SNOW AND CHARMING, ONCE UPON A TIME

I will find you. I will always find you.

Prince Charming, Once Upon a Time

Individually, I’d argue Charming (David) is the more optimistic of the two. However, as a couple, their idealism and faith in happy endings and with each other is something we need more of now. Plus, they are totally relationship goals.

I love how in Once Upon a Time, Snow (Mary-Margaret) is more of a realist at first, and it takes Charming to convince her to believe in true love. But once she does, nothing will stop her love for her husband or her family. As a couple, they will always find each other no matter the hardships they face. And that is absolutely optimistic.

Look, all I’m saying is, if we’re stuck here, then just surviving’s not going to cut it. We need some kind of relief, you know. We need some way that we can, you know, have fun. That’s right, fun. Or else we’re just going to go crazy waiting for the next bad thing to happen.

I’m in the middle of re-watching Lost right now (it’s the tenth anniversary of the series’ finale, after all), and Hurley is just so darn likable. I know everyone has crushes on Sawyer, Jack, Sayid, and Jin, but let’s not overlook Hurley’s lovability. He finds a way to see the good in everyone and is a fantastic mediator. Remember when he “conned” Sawyer into being nice to everyone?

Ultimately, Hurley’s a true leader who doesn’t recognize his own talents. It’s lovely to watch his confidence grow. Still, despite suffering from depression and other mental health issues, he holds onto optimism and kindness in a dark, mysterious world full of danger.

I suppose dying’s as good an excuse as any to start living.

If I had one word to describe this series, it would be “adorable.” Anna Friel plays Chuck, the sort of dead, the sort-of alive childhood sweetheart of Ned, a piemaker who can bring people back from the dead with the touch of his finger. Together, the couple (who can’t ever touch again, or else she will die) solve crimes with a private investigator and a waitress.

Now, Chuck grew up with agoraphobic aunts who never left the house, so she longs for adventure. And, despite being murdered, Chuck, relishes her new chance at life and embraces the world with optimism and good spirits. If Chuck and this show don’t make you smile, I’m not sure what will! Pushing Daisies is a creative romantic fantasy series and is whimsical, witty, smart, and swoon-worthy.

We don’t know what’s going to happen, Eli. That’s why they call it the future.

Maggie Dekker (Julie Gonzalo) plays an optimistic lawyer full of idealism, believing that she can make a real difference in this world. She also happens to be one of the first people to believe in Eli, a man who might be a prophet and has musical visions telling him which cases to take. So, it’s no surprise a romance develops between Eli and Maggie.

She sees the best in Eli and helps everyone around her be better people. Eli Stone is an underrated series worthy of attention – especially if you’re a fan of the new series, Zoey’s Extraordinary Playlist.

People often give optimists a hard time, as if seeing goodness and the bright side isn’t realistic, but without the optimists of the world, where would we be? Plus, when I want to enjoy some healthy escapism, I turn to TV shows with characters that lift my spirits and make me feel happy. So, if you’re looking for some positive entertainment in your life, watching these characters will surely raise your spirits.

What are your favorite optimistic characters from TV? Discuss in the comments below!