I live in a country where the mother tongue is not my own, is not English. So, as an English speaker, I often find myself picking through the very limited selection of English books at my local library and the local secondhand shop. It’s slim pickings. But sometimes I find an overlooked, obscure gem. Mary Stewart’s My Brother Michael is just such a gem. Boy, am I ever glad that I happened upon it and decided to give it a read, despite the rather ho-hum title.

I recognized Mary Stewart’s name as an author my mother read years ago, books about Camelot and King Arthur. But what I didn’t quite know or appreciate until now was that Mary Stewart was a prolific and gifted writer of not just Arthurian legend retellings but of romantic suspense and gumshoeing romances. Be still my little romantic heart, this is a genre I love. Gothic smatterings, plucky heroines, dashing love interests and a puzzle to solve – yes, please!

My Brother Michael tells the tale of the very unexpected adventure of Miss Camilla Haven while vacationing in Greece. Sitting alone in a café in Athens, scribing a letter to her friend back home in England, Camilla has literally just written, “Nothing ever happens to me,” when, well, something does happen to her. She’s mistaken for another by a man delivering a car with an urgent message that this car needs to get to Delphi A.S.A.P. to Mr. Simon, that it’s a matter of life and death. Despite her protests, her abysmal Greek lands her with keys to this car that’s to be Delphi-bound. Camilla wants to get to Delphi herself, that’s the last planned stop on her trip.

She hums and haws, waits in vain for the arrival of the real woman, and then – quite uncharacteristically – decides to drive the car to Delphi. Camilla is not a terribly proficient driver, and the descriptions of the mishaps on the way to Delphi are laugh-out-loud funny. It has truly been a long time since I was laughing so hard from a book.

Camilla makes it to Delphi, finds a Simon, who knows nothing of this car or matters of life and death. Or does he? Mr. Simon Lester, a Classics teacher like Camilla herself, is in Greece on a family matter. He is visiting the place of his brother Michael’s death fourteen years prior during WWII. So, he’s making a personal pilgrimage, hoping to find some answers to his big brother’s death. You see, Michael had sent a last letter home, a letter which Simon did not read until his father’s recent death. And the letter is very mysterious, very unlike Michael. It’s hinting at something found on Mount Parnassus, something of great worth. 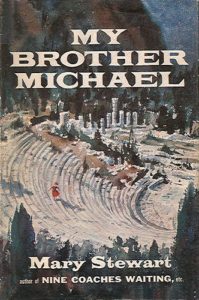 And there you have it, two teachers of the Classics end up traipsing around the Greek countryside, along the ancient paths crisscrossing the mythical Mount Parnassus, following in the footsteps of ancient Oracle-seekers and Apollo-worshippers. Betrayals from WWII come to light. Ancient myths are perhaps more real than previously considered. Evil men with evil plans are out there, so maybe it is a matter of life and death after all. Someone hired that car, but who?! And the swoony romance is a man looking at a woman, seeing her, really seeing her, and declaring, “You underrate yourself so shockingly, Camilla. You’re not to play second fiddle any more. Understand?”

Oh man, it’s good stuff. Think a grown-up version of The Three Investigators or Nancy Drew or The Hardy Boys, with a good dousing of subtle romance steadily building. I lapped it up.

Mary Stewart writes incredibly evocatively. There’s lots of self-irony. And when it comes to romance, she’s a master of the show don’t tell, of alluding, of not laying it all out there, of letting the reader read between the lines, fill in the gaps, imagine for ourselves. It makes for an incredibly engaging read, where you too are being pulled in and allowed to envision this story. It’s lovely, just really lovely.

I will now be seeking out more Mary Stewart!

Film Adaptation: My Brother Michael could be wonderfully adapted to the screen. I can just see it as period eye candy for the BBC.

Content Note: No graphic descriptions, no swearing, lots of smoking (this is taking place in the 1950s). There are possibly some dated descriptions that aren’t entirely acceptable to current mores.

Have you read My Brother Michael? Or other books by Mary Stewart? Do you have a favorite you can recommend?

Our romance-themed entertainment site is on a mission to help you find the best period dramas, romance movies, TV shows, and books. Other topics include Jane Austen, Classic Hollywood, TV Couples, Fairy Tales, Romantic Living, Romanticism, and more. We’re damsels not in distress fighting for the all-new optimistic Romantic Revolution. Join us and subscribe. For more information, see our About, Old-Fashioned Romance 101, Modern Romanticism 101, and Romantic Living 101.
Pin this article to read later! And make sure to follow us on Pinterest.
By Jessica Jørgensen on August 31st, 2018