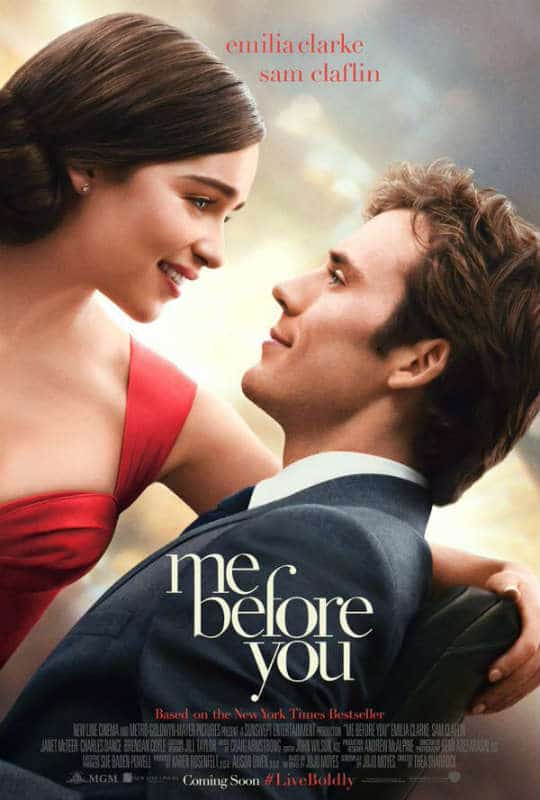 Me Before You Review

If you’re most of the population, you’re a sucker for movies like A Walk to Remember and therefore, the chance is, you are into Me Before You. I mean: a sad, touching-but-light, romantic movie with unbelievably gorgeous and well-loved British actors is one thing. Being based off an excellent book and a trailer with Ed Sheeran music all over it is another level! Sheer perfection, I thought. However, that’s where the movie fell a bit flat for me: it was too perfect and predictable. Was it good? Would I have fought hordes of fangirls to get into that film? Yes, and yes. I was going to compare and contrast the movie and book, but the adaptation of Me Before You was so close to the book that I felt that I had already seen it just by having read the book (and, ok, having seen the trailer several times).

Brief plot summary before I go on: Me Before You is about the life of Louisa Clark, a cheerful 27-year-old out of a job when the story begins. Her family needs the money, so she takes a job caring for a wealthy paraplegic – Will Traynor – and they change each other’s lives for the better.

Me Before You begins with the eccentric and sweet Louisa searching for a job in her small town in England and by default taking one caring for a paraplegic. She lives a simple, content life with her family and boyfriend (who is Neville Longbottom, turned hot!). When she gets the job, she at first does not know what to do with the very bitter and sarcastic Will (Sam Claflin), who is paralyzed from an accident. Formerly a business mogul and larger-than-life sportsman, he cannot accept his life now. They start off disliking each other while forced to be in close proximity (the scenes of her spoon-feeding him while they both are clearly uncomfortable well illustrated this) but eventually get to know one another better and fall in love. He encourages her to try new things; she encourages him to try to love life again. Overall, it’s quite cute and enjoyable to watch their witty banter and interaction.Though it was romantic, I did not feel it was primarily a romance. It’s definitely a story of growth: them learning to like each other, him agreeing to try fun things (a concert! Horse racing!) and her agreeing to leave her comfort zone (movies with subtitles! Traveling! Her hilariously awful boyfriend!).

The real highlight of the film, to me, was Emilia Clarke as Louisa. She was spectacular – I could watch her and her eternally upward-arching eyebrows all day (very intrigued to see her in Game of Thrones now, as I imagine Daenerys is a very different character). Her role as a cute, fuzzy-clothing-clad woman living a very simple life was incredibly well played- she’s simply infectious in her charm and warmth with her constant smiles and slight awkwardness. This is the reason she’s hired to care for Will – to inspire him to live life again. Perhaps it’s because I read the book, but I felt the movie did an excellent job of portraying her character – a family girl, content, with fewer horizons. The main change she undergoes after Will is that she realizes there’s more to the world than her job, her lame boyfriend, and her small town and family, and the movie showcases this splendidly.

Sam Claflin was also splendid to watch, for more reasons than one (heh-heh). Though I can’t vouch for how well he played the role of a paraplegic, his one eyebrow cock when he couldn’t turn his head to watch Louisa was consistent and consistently very attractive.

I can’t actually tell if the actors had good chemistry or if everything about them was so picture-perfect that I didn’t care. The dialogue was alright, and it was mostly taken from the book, as the screenplay was written by author Jojo Moyes herself. Essentially, the movie followed the book to the dot, cutting out less important details to condense things for the adaptation. If you enjoyed the book, you would naturally want to see the movie, but you don’t really need to. There’s nothing particularly compelling about it; it has great scenery, good acting, touching scenes, but none of it made me die laughing or sob uncontrollably. I think there were a LOT of high expectations for this movie and it just felt like a sweet, fan-promoted tribute to the book.

MAJOR SPOILER ALERT – About the Romance:

Me Before You is romantic, but again, I wasn’t consumed by the romance and I don’t think the romance is the main takeaway. I did like how it showed Louisa’s life changing through meeting Will and loving him. They dislike each other at first, then become friends, then are attracted to each other and fall in love, but it is nipped in the bud by Will’s decision to end his life. They kiss a few times, share a few romantic moments at a wedding and on their vacation, but there’s no thunderous true love or passion – this is best demonstrated when Will refuses to live after Louisa’s confession of love. Because she might regret it or pity him and that’s not the love he wants. He loves her, but it’s not enough. (But, perhaps, nothing would be enough.) Louisa is heartbroken but respects his wishes. And so did I (though not everyone in the audience will – so be warned) because the movie did not inspire in me enough emotion to advocate for their true love. It felt like love, an enjoyment of each other’s company, but it was not dramatic enough that I was going to cry buckets of tears upon his death. After this, Louisa goes to Paris and is shown exploring more of the world, sadly remembering Will but overall, happy, and grateful for his presence in her life. I’ll have to read After You by Jojo Moyes about Louisa’s life after his death to see how she fares after the ending of this first book, but I think her heart will readily go on.

THOUGHTS ON THE BOOK

Me Before You is a great read – it was engaging, enjoyable, touching, witty, romantic, and thought-provoking with its outlook on euthanasia. I do applaud it’s more unique story and the bittersweet romance. The movie stays incredibly close to the book – a trend with adaptations these days I have noticed more often these days and usually love. Unfortunately, I was underwhelmed by the movie. If you watch the trailer, you’ve basically already seen the best of the movie and the rest of it is rather…nondescript? Predictable? That isn’t to say that I regret going to see it. Emilia Clarke and Sam Claflin tragically falling in love near a beautiful castle is a treat for anyone to watch, but it didn’t quite wrench my heart out.

Our romance-themed entertainment site is on a mission to help you find the best period dramas, romance movies, TV shows, and books. Other topics include Jane Austen, Classic Hollywood, TV Couples, Fairy Tales, Romantic Living, Romanticism, and more. We’re damsels not in distress fighting for the all-new optimistic Romantic Revolution. Join us and subscribe. For more information, see our About, Old-Fashioned Romance 101, Modern Romanticism 101, and Romantic Living 101.
Pin this article to read later! And make sure to follow us on Pinterest.
By Amirah Yasin on June 14th, 2016

2 thoughts on “Me Before You Film Review – A Little Too Perfect?”