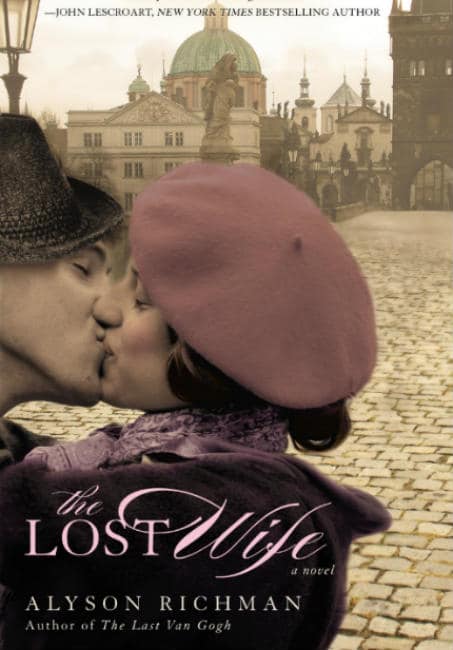 There are some books that just grab hold of you as you read them. They make you laugh and cry, sometimes at the same time, and it’s both amazing and very frustrating. The novel The Lost Wife by Alyson Richman is one of these books. It made me laugh, it made me cry, and it made me jump for joy. The novel opens with a wedding, where the grandfather of the groom recognizes the grandmother of the bride as his wife, who has been lost for decades (hence the title).

Jumping in, Lenka tells the reader about her childhood in Prague. After this, The Lost Wife jumps around in time, following the lives of Josef and Lenka, two Jews from Prague on the eve of World War II. Josef is a medical student and Lenka is an art student, and one summer, they fall in love.

The summer can’t last forever, however, and the political climate of Prague turned on a dime. Suddenly, it was dangerous to be Jewish in Prague. When Josef and Lenka get married, he tries to get her family out of the country but is unable to. Determined to not leave her mother, father, and sister behind, Lenka refuses to go with her husband to safety. Reluctantly, he goes to England without her, trying to get her and her family out of Prague.

Pregnant in Prague, Lenka gets the news that the ship carrying her husband has sunk and he is now dead. After suffering a miscarriage, Lenka finds herself in a work camp and is eventually sent to Auschwitz. Josef is not dead, however, and he tries to find his wife, lost in Europe and listed as dead. Josef and Lenka, both convinced that the other is dead, attempt to move on with their lives both during and after living through the horrors of war.

The Lost Wife is a poignant and bittersweet story about the power of love and the horrors that Jewish people suffered during the Holocaust. The romance is sweet and the story, though intense at times, is beautifully woven. Richman is able to make her characters come alive, and the fact that the characters tell their stories makes them feel real. Readers share the triumphs and tragedies that Lenka and Josef face, and it’s a beautifully written piece.

A brief content warning, though; even though some of the violent things are more implied, one of the two main characters did spend time at Auschwitz, so that’s disturbing, and there was a brief (though mostly implied) wedding night.  However, if you’re a fan of bittersweet historical fiction romances that end on a note of hope or some part of that sentence, The Lost Wife might be the book for you.

Our romance-themed entertainment site is on a mission to help you find the best period dramas, romance movies, TV shows, and books. Other topics include Jane Austen, Classic Hollywood, TV Couples, Fairy Tales, Romantic Living, Romanticism, and more. We’re damsels not in distress fighting for the all-new optimistic Romantic Revolution. Join us and subscribe. For more information, see our About, Old-Fashioned Romance 101, Modern Romanticism 101, and Romantic Living 101.
Pin this article to read later! And make sure to follow us on Pinterest.
By Bailey Cavender on September 28th, 2016