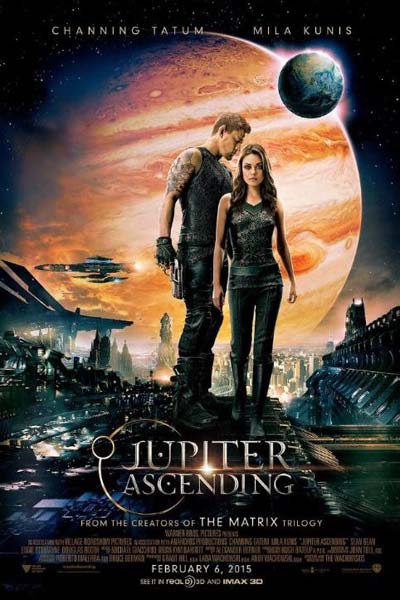 Film Written and Directed by: Andy and Lana Wachowski

Having seen some abysmal reviews of Jupiter Ascending, I went in with very little expectations, other than to keep an open mind.  Personally, I’m glad I didn’t listen to the critics this time around. Sure, the film is no Oscar winner, but so what? Basically, Jupiter Ascending is an entertaining (though sometimes overdone) romantic fairy tale in space.

The story follows Jupiter, a poor toilet cleaner (so maid of some kind) whose family has immigrated from Russia to America after her father is murdered (James D’Arcy playing the father who loved looking up at the sky was a real highlight). Life is hard, and with no money and no real opportunities, Jupiter clearly doesn’t appreciate her home. Every morning she wakes up saying, “I hate my life.” Little does she know (though hinted at in the stars on the night of her birth) that her life is about to get turned upside down.

An ordinary (and seemingly crappy existence) is something many will be able to identify with. For Doctor Who fans, Jupiter plays out a lot like an ordinary companion entering into the extraordinary, her only superpowers goodness and empathy. With no money and the desire to buy a telescope like her father once had, she decides to donate her eggs. Jupiter’s only problem however? Her DNA is on record, and there’s something quite different and dangerous about her DNA…

Targeted by a powerful man (a royal) in space because her DNA marks her as the heir and owner of earth, Jupiter is about to be assassinated by his alien goons when Caine (Channing Tatum) arrives in the nick of time to rescue her (I’ll admit to highly enjoying this rescue sequence). From that point on, everything changes. Jupiter quickly learns that her genetic signature (identical to the immortal royals’ mother) makes her royalty, something a toilet cleaner finds hard to believe.

Once Jupiter enters into the once unknown world (with hardly any knowledge of how to navigate within this new world), she doesn’t know who to trust, though instinct and developing feelings for her rescuer Caine, tells her the one man she can trust is him. Caine (a genetically engineered soldier with some wolf DNA) doesn’t think they would work. For one thing, she’s royalty. As Balem (Eddie Redmayne) and Titus (Douglas Booth) try to kill her in order to each own earth (they want to harvest humans for profit), things get even crazier and complicated from there.

What I loved about Jupiter Ascending (aside from the sheer ambitiousness of it), is Jupiter. She’s a female character that feels like a normal woman and in a world of “strong” female characters, she’s a breath of fresh air. She doesn’t have superpowers (so yes, she does have to be rescued often), but she enters into the extraordinary like most ordinary women would. Do most of us know how to fight off big alien creatures with weird technology? Could you be easily manipulated by a man who has lived for thousands of years? Some may call Jupiter passive, but I don’t believe she is. When it comes to making choices and standing up for her beliefs, she turns to her goodness and humanity to help save the world. I won’t go into many details so as not to spoil, but Jupiter (in her quiet way) does get a chance to be a hero and be more than just a damsel in distress.

I read an interview from the directors Andy and Lana Wachowski that Jupiter’s influence came back to Dorothy in The Wizard of Oz. After reading that, I appreciate even more what the two were trying to accomplish. Themes of home and the importance of family really ring true in this fun space opera. I would even dare say I saw influences from Return to Oz (Caine’s skates are really reminiscent of that film for sure).

In this rags to riches (sort of) Cinderella tale (she even cleans for a living), I loved the fairy tale elements (Beauty and the Beast is another influence between Caine and Jupiter) and would definitely recommend the movie for those viewers looking for a fun romance in space. While I personally wouldn’t have cast Channing Tatum (his accent was very confusing at times) and would have preferred someone lesser known like Alex O’Loughlin (Moonlight; Hawaii Five-O), the cast as a whole worked really well. Eddie Redmayne as the main villain is pure campy brilliance. He’s also kind of terrifying. Sean Bean also makes a nice appearance in the movie, but what I really loved were all the side British actors from familiar movies and TV series playing small, but mostly memorable roles. Still, the main standout for me had to be Douglas Booth, playing the other villainous brother Titus. This young actor has real potential to become huge in the future.

While I enjoyed the movie in all its campy glory and thought the costumes were gorgeous, I do think it suffered from too many action scenes. Some lingered on too long (though the special effects and visuals of this movie were quite spectacular). With less time on action and more time on the development of the romance between Caine and Jupiter, the movie would have greatly benefited. Even with some setbacks and imperfections, if you go in expecting a fun romantic fairy tale (and don’t mind some cheesy moments), I definitely think you just might have a good time.

Our romance-themed entertainment site is on a mission to help you find the best period dramas, romance movies, TV shows, and books. Other topics include Jane Austen, Classic Hollywood, TV Couples, Fairy Tales, Romantic Living, Romanticism, and more. We’re damsels not in distress fighting for the all-new optimistic Romantic Revolution. Join us and subscribe. For more information, see our About, Old-Fashioned Romance 101, Modern Romanticism 101, and Romantic Living 101.
Pin this article to read later! And make sure to follow us on Pinterest.
By Autumn Topping on February 15th, 2015