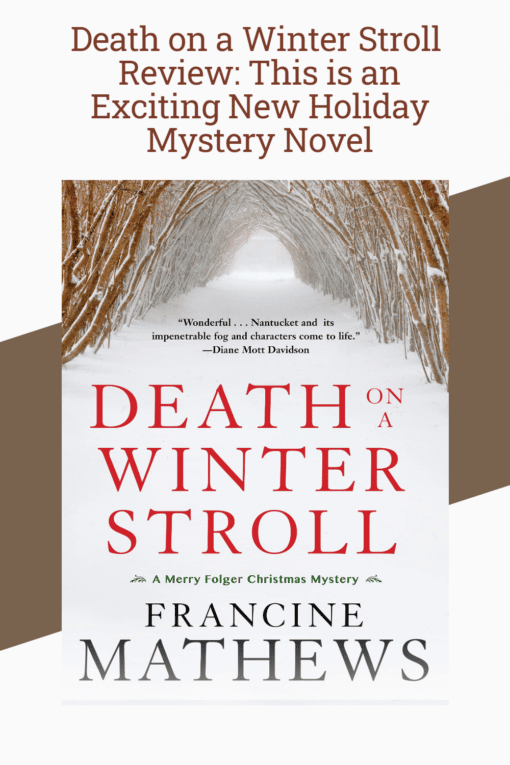 No-nonsense Nantucket detective Merry Folger grapples with the aftermath of the COVID-19 pandemic and two murders as the island is overtaken by Hollywood stars and DC suits.

Nantucket Police Chief Meredith Folger is acutely conscious of the stress COVID-19 has placed on the community she loves. Although the island has proved a refuge for many during the pandemic, the cost to Nantucket has been high. Merry hopes that the Christmas Stroll, one of Nantucket’s favorite traditions, in which Main Street is transformed into a winter wonderland, will lift the island’s spirits. But the arrival of a large-scale TV production, and the Secretary of State and her family, complicates matters significantly.

The TV shoot is plagued with problems from within, as a shady, power-hungry producer clashes with strong-willed actors. Across Nantucket, the Secretary’s troubled stepson keeps shaking off his security detail to visit a dilapidated house near conservation land, where an intriguing recluse guards secrets of her own. With all parties overly conscious of spending too much time in the public eye and secrets swirling around both camps, it is difficult to parse what behavior is suspicious or not—until the bodies turn up.

Now, it’s up to Merry and Detective Howie Seitz to find a connection between two seemingly unconnected murders and catch the killer. But when everyone has a motive, and half of the suspects are politicians and actors, how can Merry and Howie tell fact from fiction?

This latest installment in critically acclaimed author Francine Mathews’ Merry Folger series is an immersive escape to festive Nantucket, a poignant exploration of grief as a result of parental absence, and a delicious new mystery to keep you guessing.

After reading Jane and the Year Without a Summer from the Jane Austen Mystery series (published under the pen name Stephanie Barron), I became a big fan of Francine Mathews.

So even though I don’t read much contemporary detective fiction (except for cozy and romance), I wanted to try Death on a Winter Stroll. It’s book seven in the Merry Folger Nantucket Mystery Series, but it works as a standalone.

Thankfully, the book was a pleasant surprise. While I don’t read the genre regularly, I frequently watch mystery series – from the cozy to the gritty. I love a good intelligent mystery to solve!

This book felt like one of those shows. It has the grit and small-town feel of shows like Broadchurch or Mare of Easttown with numerous suspects. The book also has a fascinating protagonist, detective Merry Folger. There is a hint of romance too.

And with the added appeal of actors, filmmakers, and politicians as characters (and suspects), not to mention Christmas in Nantucket, it’s hard not to enjoy this fast-paced holiday read!

The characters are fleshed out, the prose from Mathews engaging, and the mystery compelling.

Now, I must warn there is some strong language in this book, and it does live in the real pandemic world, so if you’re looking for a complete escape, be aware.

Overall, Death on a Winter Stroll is an exciting, thrilling page-turner full of captivating characters and an intriguing mystery perfect for Christmas.

Content Note: The book is a contemporary read with some strong language, innuendo, and murders – although not graphically depicted. Trigger warnings: A character realistically deals with an eating disorder. And there are descriptions of assault and harassment.

Death on a Winter Stroll would work amazingly as one season of a TV series about the no-nonsense detective, Merry Folger, solving cases. I know I’d watch it!

MORE ABOUT DEATH ON A WINTER STROLL

Francine Mathews was born in Binghamton, New York, the last of six girls. She attended Princeton and Stanford Universities, where she studied history, before going on to work as an intelligence analyst at the CIA. She wrote her first book in 1992 and left the Agency a year later.

Since then, she has written thirty books, including six previous novels in the Merry Folger series (Death in the Off-Season, Death in Rough Water, Death in a Mood Indigo, Death in a Cold Hard Light, Death on Nantucket, and Death on Tuckernuck) as well as the nationally bestselling Being a Jane Austen mystery series, which she writes under the pen name Stephanie Barron. She lives and works in Denver, Colorado.