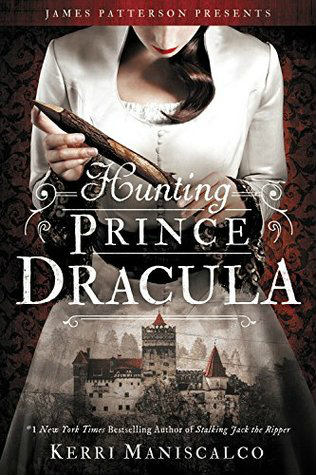 Audrey Rose Wadsworth is back in another thrilling novel of intrigue, mystery, and romance! After the devastating events in Stalking Jack the Ripper, Audrey Rose escapes London for the snow-capped mountains of Romania. Accompanied by the ever-charming yet exasperating, Thomas Cresswell, Audrey Rose heads for one of Europe’s best schools in forensic medicine. Located in a remote castle once home to the legendary Vlad the Impaler, Audrey Rose soon finds herself in the middle of another murder case. With her grief and past nipping at her heels, Audrey Rose once again puts her incomparable skills to use as she begins Hunting Prince Dracula.

So, warning given….let’s dig in!

Hunting Prince Dracula – Deep in the Heart of Romania

Audrey Rose’s journey takes a deeply personal turn in Hunting Prince Dracula. She is no less fierce or independent. However, there is a new vulnerability to her and it terrifies her. Devastated by her brother’s death, Audrey Rose attempts to bury her grief. Yet, the destruction her brother left behind threatens to unravel her. Moreover, science, the one comfort that never failed her, becomes a thing to dread. For the victims in London haunt her, and images from the past threaten to overwhelm her.

Her fear attacks without notice. She thinks it’s a lack of control which frightens her more than anything else. She does not want to appear weak. Especially since her sex will most certainly be a mark against her in a school for men. Worse, her ability to dissect and study the dead is in question. That is Audrey Rose’s greatest fear. Her lifelong dream is also her current nightmare. Following Audrey Rose’s journey as she navigates what she perceives as a weakness is heartbreaking. It’s also beautiful. She is realizing her dream at a time of personal anguish.

A Relationship of Equals – Wadsworth and Cresswell

Further complicating matters for Audrey Rose are her feelings for Thomas. It’s not so much her feelings that scare her but what it would mean to act on them. What will she have to give up? Sacrifice? Will Thomas continue to accept her? Or will Thomas realize her interest in the dead is unseemly for a lady? Even worse, will he no longer consider her an equal? All of these thoughts run through Audrey Rose’s mind every time she gets close to admitting her feelings for Thomas. Yet, she holds back, afraid she may destroy Thomas as she battles her fear.

“Hearts were beautifully fierce yet fragile things.
And I did not wish to break Thomas’s.”

Thomas remains his usual snarky yet charming self. However, all is not what it seems. It seems that Audrey Rose is not the only one grappling with fear. In Hunting Prince Dracula, we learn more about Thomas, his family, and the why behind his cocky facade. Maniscalco relies on Audrey Rose’s point of view to reveal the layers in Thomas’ character. Thus, through her eyes, the subtle shifting of Thomas’ body language is our guide to his thoughts and emotions. Of course, Thomas remains his usual awkward self when it comes to his emotions. He finds himself in uncharted territory when it comes to his feelings for Audrey Rose. At times, he makes mistakes. But then, in the next breath, he makes the most heart-wrenching confessions of love.

“You would miss me terribly and you know it. Just as I would miss you
in ways I cannot fathom, should we ever part.”

The story is infinitely darker in Hunting Prince Dracula. The gruesome deaths involve stakes and bodies drained of blood. The legend of Vlad Tepes serves as the basis for the mystery and Maniscalco serves it on a chilling platter. Each word builds upon the one before until the cold halls of the school surround you. Everything Audrey Rose sees or hears leaps off the pages, living in your imagination thanks to Maniscalco’s vivid prose. Folklore mixes with science, adding a haunting feel to the story. The tension builds perfectly into a heart-pounding crescendo. You’ll be flipping back to Chapter 1 to start again before your heart even has a chance to settle.

Hunting Prince Dracula is a stunning sequel to the Gothic series, Stalking Jack the Ripper. As Audrey Rose hunts a killer, she begins to rebuild her life. As she fits the broken pieces back together, she discovers that however they fit, the change has only made her stronger.

Have you read Kerri Maniscalco’s latest in her Stalking Jack the Ripper series? What did you think of Hunting Prince Dracula? Drop me a line in the comments below!

Hunting Prince Dracula is available now in your favorite books store. You can also purchase a copy for your Kindle, NOOK, Kobo app, or Google Play Books. For more on author Kerri Maniscalco, visit her on Twitter or Instagram.

Content Warning: There are descriptions of gruesome murder scenes; however, there is nothing explicit or graphic.

Our romance-themed entertainment site is on a mission to help you find the best period dramas, romance movies, TV shows, and books. Other topics include Jane Austen, Classic Hollywood, TV Couples, Fairy Tales, Romantic Living, Romanticism, and more. We’re damsels not in distress fighting for the all-new optimistic Romantic Revolution. Join us and subscribe. For more information, see our About, Old-Fashioned Romance 101, Modern Romanticism 101, and Romantic Living 101.
Pin this article to read later! And make sure to follow us on Pinterest.
By Catherine on October 18th, 2017