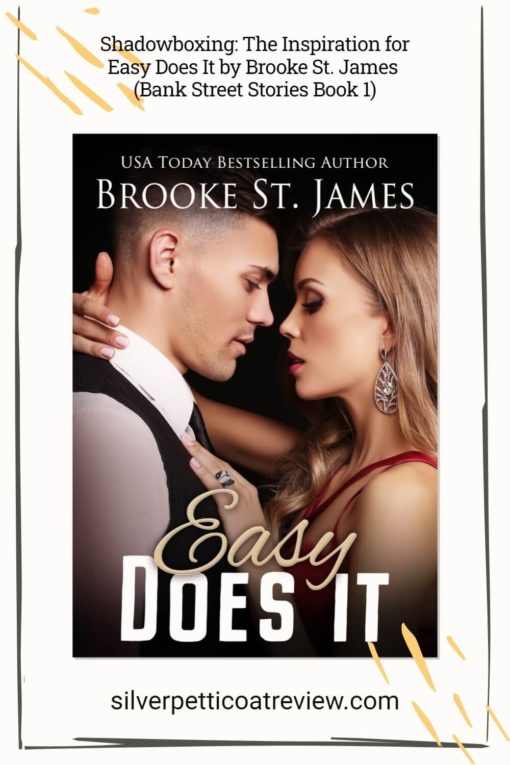 THE INSPIRATION FOR EASY DOES IT (BANK STREET STORIES BOOK 1): POST BY BROOKE ST. JAMES

THE WORLD OF MIXED MARTIAL ARTS

It was almost fifteen years ago when I was initiated into the world of Mixed Martial Arts (MMA). My family and I had just moved to Lexington, KY. My oldest son, 5 years old at the time, had begun taking gymnastics classes at a large athletic training facility.

On the second floor of the building was a seating area for parents to watch their children practice. Most of the parents would congregate up there, get to know one another and watch the kids do things our bodies were no longer capable of doing.

It wasn’t long after I settled into that routine that I noticed some activity in a smaller space on the second floor of the gym. I couldn’t see what was going on in there, but I definitely heard loud thuds, rhythmic popping sounds, chains rattling, and timers going off.

Occasionally, groups of sweaty and surly-looking guys would pour out that small space to get water from a nearby fountain. I quickly noticed that even though they looked intimidating, those young men were all smiles and really seemed to enjoy each other’s company.

I was so curious about what was going on in that room that I started talking to a guy who looked like the ring leader for this curious crew of young men. It turned out he was the owner of a small MMA gym and head coach of a local fight team.

By the time that conversation was finished, I had signed my whole family up to begin training Jiu Jitsu, Muay Thai, and Boxing.

That gym grew and became a second home to us soon after. But a few years later we relocated to Louisiana, where I was born and raised.

As soon as we started unpacking our boxes we found a new gym. We began training under UFC veteran Tim Credeur, and were suddenly surrounded by a new group of up-and-coming young fighters.

As I got to know Tim, the other coaches, and the fighters, I began to see certain patterns emerge. Many of these young men were overcoming struggles. Those might be simple things like trying to lose weight or more complex issues like dealing with past abuse, abandonment, addiction, and loss.

The coaches seemed to simultaneously balance the roles of an athletic trainer and father figure. They helped the aspiring fighters to push the limits of their bodies and minds while also developing the ability to deal with things they were fighting with outside of the gym. ‘Building Better People’ was the phrase painted on one of the walls in the gym, and it really began to make sense to me.

I also got a kick out of seeing new fighters earn their fight names. ‘The Ghost’,

‘The Jellyfish’, ‘The Model’, ‘Danger’, ‘The Diamond’, and ‘Dynamite’ to name a few. These names were born out of things like their physical appearance, the way they trained or fought, or some other personality trait. Regardless of what it was, it was always up to the coaches to pick a fight name, and not everyone earned one.

The more time passed, the more I felt inspired by these athletes and wanted to find a way to tell their stories. I knew that I wanted to create a series that revolved around a gym and explored some of the struggles I had witnessed these young men go through.

I also felt that I wanted to spotlight the grit and discipline needed to succeed at the highest levels of boxing. What I hadn’t settled on was a location.

It was during a time when I was beginning to explore the characters in the Bank Street Stories series that my family and I took a trip to Galveston Island.

There are two ways to get by car to Galveston. You can either go through Houston and take a bridge or head south at Beaumont and take a ferry boat across Galveston Bay. Of course, we opted for the ferry boat experience.

Like Tess, the heroine in Easy Does It, I knew there was something special about Galveston from the moment we got on the ferry. When we began to explore the island, I was enamored with the vintage feel. There were so many gorgeous Victorian homes and the Strand felt like it was standing still in time.

I began to learn more about Galveston’s history and in particular, the Great Storm of 1900. This was a hurricane that completely destroyed the island and arrived with little to no warning.

That was when I began to realize that the city, just like those young fighters, had to be courageous, strong, and dedicated to rebuilding itself and becoming something even better. I knew Galveston would be the setting for this series.

Easy Does It is set on Galveston Island during the summer of 1968. Billy Castro is a local street thug with a troubled past and natural ability to fight. Tess Cohen is a young woman from a small town in Louisiana with dreams of becoming an artist who paints beach scenes.

She moves to Galveston for the summer with her younger sister as a way to play out her artistic desires before settling into a normal life back in Louisiana.

Much like the feeling I got during our first trip, Tess knows Galveston is her home from the moment she steps foot on the ferry. She encounters Billy not long after arriving on the island and sees something special behind his rough exterior. So does a former boxing champion and local coach, Marvin Jones.

Billy feels like his past defines him, making him unlovable and destined for a life of crime. Tess helps him to overcome those issues as a summer romance develops between the two of them.

Marvin begins to mentor Billy, providing him with all the athletic and life lessons that I witnessed coaches offer young fighters time and time again. He even gives him the nickname ‘Easy’ during their first training session. This is a rite of passage that typically takes years and illustrates the fact that Marvin recognizes the endless potential and raw talent of young Billy.

Ultimately, Billy realizes he can rebuild himself into someone better and sets his sights on becoming a champion and starting a family with Tess. It’s a sort of Cinderella Story if you will.

My family and I are still extremely active in the MMA community. My husband and sons have trained Jiu Jitsu for over a decade, I train Muay Thai kickboxing, and my daughter-in-law has a black belt in Judo. The gym is still our second home and young fighters continue to enter our lives.

Last Sunday, I was contemplating how I would approach this blog post. Later that morning while my family and I were at church, the pastor used this verse while illustrating a point:

1 Corinthians 9:26 Thus I fight: not as one shadowboxing (who beats the air).

Sure enough, all of us grabbed on to the word ‘shadowboxing’ and began speculating about whether or not boxing existed 2,000 years ago.

After some further investigation and discussion, we came to find out that in the context of this passage it is referring to someone who is fighting against themselves. An internal struggle wrapped up in an athletic metaphor.

This is exactly why Billy needed Tess and Marvin, and is also why all those young fighters I’ve met need their coaches. There is often an internal struggle within these young athletes that stems from something negative in their past.

But through the dedication required to employ the mastery and artistry needed in this sport, they overcome that internal struggle and rebuild themselves into something better.

ABOUT EASY DOES IT BY BROOKE ST. JAMES – OFFICIAL SYNOPSIS:

Tess Cohen was a 23-year-old aspiring artist with dreams of painting beach scenes. She longed to leave the small town of Starks, Louisiana, and head for California to make a go of it as an artist.

Instead, she compromised with her parents and decided to spend the summer of 1968 on Galveston Island with her younger sister, Abigail. It was just meant to be an extended summer vacation.

Abigail would return to college in the fall and Tess would finally settle down for good in Starks. But then a chance encounter with ‘Easy’ Billy Castro changed everything.

Billy had a troubled past and was orphaned at the age of 16. No stranger to conflict, he’d been using his natural talent for fighting to scrape together a living collecting debts for a local gambling organization.

When boxing legend, Marvin Jones, finds out Billy has roughed up one of his fighters, he presents him with an opportunity to turn his life around. Thankfully, Tess also sees his potential and the love that grows between them that summer will only serve as a catalyst for his drive to become a world champion boxer.

Brooke St. James unfolds this timeless story at a leisurely Texas pace, and Galveston Island serves as the perfect beach background in a love story that pulls out all the stops.

She was born and raised in south Louisiana but has had the opportunity to travel and live throughout the U.S.

An avid reader, writer, audio book addict, and fan of all things artistic, she constantly has her hands in some creative activity. She has written and published more than 70 books.

She’s currently back home in Louisiana enjoying life with her husband, children, and two lazy dogs.

By The Silver Petticoat Review on March 30th, 2022