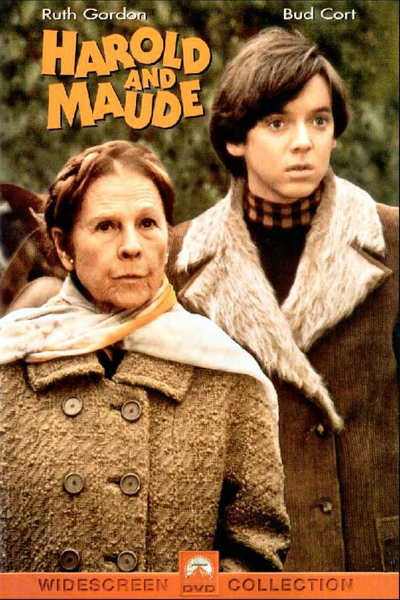 It stars Ruth Gordon as the free-spirited octogenarian Maude, who has a ceaseless zest for life, and Bud Cort as the young, morbid Harold, who is suffering from ennui, fear and just general stagnation. Hal Ashby directs.

Although initially panned by the critics, Harold and Maude is now considered a classic, landing on many “Best of” lists. It is well deserved.

“Would You Like Some Licorice?” When a Pessimist Meets an Optimist

Harold (Bud Cort) is suicidal. He “kills” himself many times during the course of the movie: hangs himself, drowns himself, sets himself on fire, drives over a cliff, stabs himself, shoots himself, cuts off his hand, and on it goes. It’s grotesque and funny and all about provoking a reaction from his distant and rather overbearing and indifferent mother (Vivian Pickles).

RELATED: A Score of Scores: 20 Pivotal Songs from Film

The movie is, essentially, a series of self-contained vignettes chronicling Harold’s life: suicide attempts, mother-sanctioned dates, visits to the shrink, talks with Uncle Victor (a one-armed military man who wants to enlist Harold), encounters with Maude (Ruth Gordon) and eventual adventures with Maude. It is with Maude that the vignettes blossom and lengthen and become more cohesive – very much symbolic of the effect she is having on Harold’s sad little life.

Harold first meets Maude at a funeral. They both go to funerals for fun. Harold drives a hearse. They begin to notice each other at these funerals, and Maude decides to make contact, offering him licorice during a service. And then it just takes off from there.

Maude is nearing 80, Harold is not yet 20. She is chatty and open and smiley, while he is withdrawn and sullen and rather mute. Maude “borrows” others’ cars without permission, makes art, dances to her own tunes, rescues trees, watches things grow, wonders at life and peppers her soliloquies (since Harold doesn’t say much) with many philosophical insights on life and its point(s). She is a life force without equal. And her joie de vivre begins to slowly and steadily transform Harold.

The smiles and the words begin to form and flow in this young man, who has heretofore only seen darkness and death and destruction. Harold, this lonely, lonely boy, has found a friend and begins to feel love and loved for the first time in his life. Because Harold truly does love Maude. 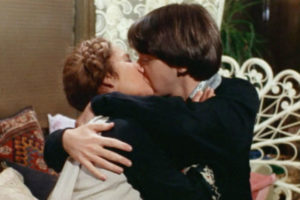 “Everyone has the Right to Make an Ass of Themselves”: Who Doesn’t Love Maude, Harold, and Harold’s Mom?

And what’s not to love about Maude? Ruth Gordon is absolutely captivating as the vivacious Maude. We are all soon in love with Maude. She is eccentric and generous and loving and funny. And there’s hinted at a great tragedy in her life, but she stands there still, loving life, open to its possibilities, as well as understanding and accepting the necessity and beauty of death. She is fantastic.

And Harold – Bud Cort’s Harold is such an appealing misfit, so lost and doe-eyed and anguishing existentially. A real tortured soul. And yeah, he’s weird and looks like a member of the Addams Family, all pale-faced and black-haired, but as he opens up, letting himself be vulnerable, smiling, sharing, well, you’re hard-pressed not to get sucked in by those twinkling eyes and dimples. He is such an unconventional, romantic male lead and that is a huge selling point in this unconventional love story.

And I would be totally remiss if I did not mention Harold’s mother in this film. The great British actress Vivian Pickles put in her only appearance ever in a North American film in Harold and Maude. She is absolutely fabulous as Harold’s mother, Mrs. Chasen. The scenes between she and Harold are comedic gold. She plays the aloof, non-reactive straight man, or rather, woman to Cort’s fake-suiciding, depressed Harold, and she is simply brilliant.

“Go and Love Some More!” An Absurdist Joie de Vivre

Harold and Maude is a movie with a message, a joyous time capsule of the free-love ideals of the sixties and seventies. As a child of former hippies myself, such idealistic messages seem to strike a personal chord in me. I fall for them every single time.

The film is eminently quote-worthy and filled with philosophical ponderings on the human condition and many pearls of wisdom on the meaning of life. In this, Harold and Maude makes a statement, a political statement, and operates as something of a modern-day morality play. There is much symbolism at work and many ethical issues and moral implications raised about war, suicide, the purpose of life and the like. It’s crazy and it’s dark and it’s idealistic and it’s funny and it’s sad. Truly, it’s life-and-death-affirming and oh so joyous. 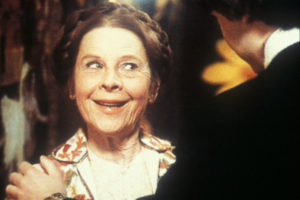 Content Note: Rated PG. As noted in the review, this is a dark rom-com with gallows humor, so there are some disturbing images of suicides. Suicide is an ongoing theme in the piece. There is no skin, little swearing, one implied sex scene. And yes, a young man falls in love with an old woman.

Our romance-themed entertainment site is on a mission to help you find the best period dramas, romance movies, TV shows, and books. Other topics include Jane Austen, Classic Hollywood, TV Couples, Fairy Tales, Romantic Living, Romanticism, and more. We’re damsels not in distress fighting for the all-new optimistic Romantic Revolution. Join us and subscribe. For more information, see our About, Old-Fashioned Romance 101, Modern Romanticism 101, and Romantic Living 101.
Pin this article to read later! And make sure to follow us on Pinterest.
By Jessica Jørgensen on September 29th, 2017