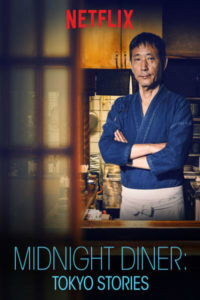 When people finish their day and hurry home, my day starts. My diner is open from midnight to seven in the morning. They call it “Midnight Diner.” Pork miso soup combo, beer, sake, shochu – that’s all I have on my menu. But I make whatever customers request as long as I have the ingredients for it. That’s my policy. Do I even have customers? More than you would expect.

This narration begins every episode of Midnight Diner: Tokyo Stories, a strangely wonderful and weirdly addictive little morsel of a series on Netflix. Led by a haunting folk song, “Omoide” (Memories), sung by the beautifully gritty voice of Tsunekichi Suzuki, you are drawn through the busy, concrete jungle of Tokyo, with its skyscrapers of glass, to this dark little back alley, where the Master (Kaoru Kobayashi) prepares to open his restaurant. It is he who narrates, it is he who makes the food, it is he who is the palpitating heart of this delightful little series.

The Master and His Mnemonic Meals

The series is episodic in nature, comprised of ten little episodes, each just over 20 minutes long, and each its own self-contained narrative. Every episode, there is a focus on a different character, a new food and a new story that has unfurled itself from this specific food item, be it tan-men noodles (without the noodles) or corn dogs or egg tofu or pork chops and on it goes. Ten episodes, ten foods, ten little stories, and one Master.

The Master is the unifying thread, an enigmatic constant in this series. He doesn’t say much, but he listens very well and observes intently and gently prods and guides and counsels as necessary, as well as making the food, naturally. He is the chef, who serves up memories to his customers, making their – sometimes rather odd – requests. The Master never judges or condemns or gossips. He meets people where they are, as they are, and just accepts the rag-tag groups of people, who hang out in a restaurant in the middle of the night. Kaoru Kobayashi plays him masterfully.

Serving Up Lessons in Humanity

There is such compassion and understanding and love extended even, and especially, to those characters, which a quick judgement would want to dismiss. People of different cultures, different values, different ideologies, different circumstances, different ideas, different sexual orientations, different political parties – all are made human, fallible and beautifully human, and hence, identifiable and relatable to all of us mere mortals on this blue planet in this solar system in this galaxy in this vast, ever-expanding universe.

Life-affirming lessons in humanity, in interconnectedness, in positivity, in food – yeah, it’s worth it to partake of a morsel or two or ten.

Our romance-themed entertainment site is on a mission to help you find the best period dramas, romance movies, TV shows, and books. Other topics include Jane Austen, Classic Hollywood, TV Couples, Fairy Tales, Romantic Living, Romanticism, and more. We’re damsels not in distress fighting for the all-new optimistic Romantic Revolution. Join us and subscribe. For more information, see our About, Old-Fashioned Romance 101, Modern Romanticism 101, and Romantic Living 101.
Pin this article to read later! And make sure to follow us on Pinterest.
By Jessica Jørgensen on August 18th, 2017