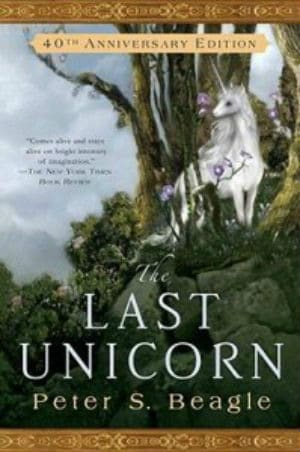 Peter S. Beagle’s novel The Last Unicorn begins with words as legendary as Tolkien’s The Hobbit: “The unicorn lived in a lilac wood, and she lived all alone.” Thus, he introduces his deceptively simple tale about an immortal unicorn who realizes that it has been many years since she has seen other unicorns. There was a time when unicorns were abundant in the world. Where are the others?

The answer appears in the form of a butterfly, a playful, half-mad creature who, like all butterflies, repeats bits and scraps of information it’s heard on its travels. At first, it doesn’t have much of use to tell the unicorn then suddenly she learns what happened to the others in stark, chilling language: “No, no, listen. Don’t listen to me, listen. You can find your people if you are brave. They passed down all the roads long ago, and the Red Bull ran close behind them and covered their footprints.” 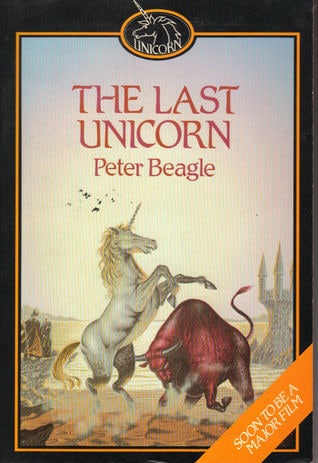 What is the Red Bull? From Beagle’s descriptions, we know that it is a creature from everyone’s deepest nightmares.

And the classic fantasy quest begins, though, at the same time, this is a journey unlike any you’ve seen in other books. Although she knows that without her, winter will come to her enchanted forest, the unicorn realizes she must go and find the others and bring unicorns back into the world. She sets out despite the dangers and uncertainties that lurk outside her home.

Along the way, she experiences adventures that she could never have imagined, and of course, she meets enemies and friends. She comes across the magician Schmendrick with his ageless face. He is quite powerful, but many of his spells don’t work quite the way he wants them to. They eventually meet Molly Grue, who is worn by the cares of her life and devastated when she first sees the unicorn.

“And what good is it to me that you’re here now? Where were you twenty years ago, ten years ago? How dare you, how dare you come to me now, when I am this?” With a flap of her hand she summed herself up: barren face, desert eyes, and yellowing heart. “I wish you had never come. Why did you come now?” The tears began to slide down the sides of her nose.

Molly forgives the unicorn, though. Of course, she must. They continue searching for the others and come to the kingdom of King Haggard, who is as perfectly named as a king can be, and his son Prince Lir who is destined for greatness and heartbreak. As Schmendrick says, “Great heroes need great sorrows and burdens, or half their greatness goes unnoticed. It is all part of the fairy tale.”

The Last Unicorn is an indispensable story for anyone who loves fantasy. Beagle has created a story which pulls at your heart as it sometimes reminds you of the inevitable sadness of our world because it changes and is 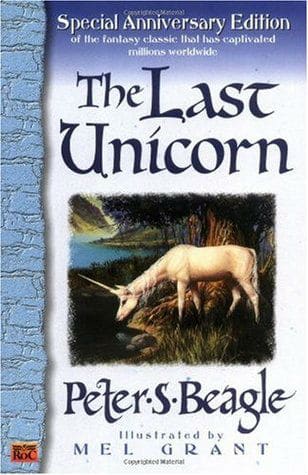 always changing. Nothing can ever stay the same, not even unicorns, but there is always hope because at least there is one unicorn still left in the world. Her determination and bravery is both heart-wrenching and uplifting, and like all the characters in the story, the reader is awed by her and what she represents.

Peter S. Beagle writes in an effortless, exquisite language that I envy. You feel that you are reading a legend as you are drawn into the tale; yet at the same time, the story sometimes prods and amuses us with quirky or practical details:

‘”What have you heard of dashing Captain Cully and his band of freemen?'”  thunders the leader of some thieves they meet in the wood, but then he adds, “‘Have a taco.'” When the travelers encounter possible trouble,  “The magician stood erect, menacing the attackers with demons, metamorphoses, paralyzing ailments, and secret judo holds. Molly picked up a rock.”

Beagle’s tale may appear to be the typical quest story, but it’s full of the unexpected and of contradictions while at the same time employing well-known fantasy elements. So, for example, there is a powerful king, a hero in waiting and a magician incorporated into this story, but the unicorn is the heroine of this tale, not a passing element of the story. There is no beautiful maiden, at least not at first, just plain, old Molly Grue who cooks and cleans and should have passed her time for unicorns long ago. King Haggard’s castle is imposing, gloomy and mysterious, but one of the inhabitants who is most important to the story is a one-eyed cat who of course knows all the secrets, but explains, “I am what I am. I would tell you what you want to know if I could, for you have been kind to me. But I am a cat, and no cat anywhere ever gave anyone a straight answer.”

Even if you don’t (inexplicably) love fantasy, I’d recommend giving this book a try as in many ways, it is not your typical fantasy novel at all. You can pick it up for the unusual, absorbing standalone story or just to drink in Beagle’s astonishing prose. I guarantee there will be some quotes that will stick with you long after you’ve read it, just as the unicorn herself will haunt you and stay with you, much as she does with the other characters of the story.

If you’ve been introduced to this tale through the very good 1982 animated movie, I think you will find even more to enjoy reading the book. The movie follows the book very faithfully, but there are many more wonderful details in the story, and it is easier to appreciate the superb language. 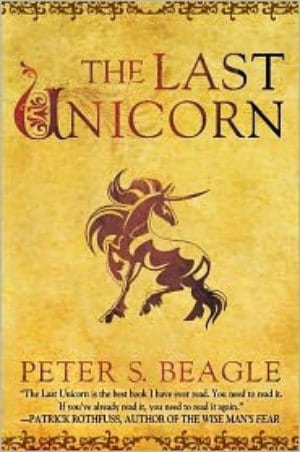 I wondered as I wrote this if I should classify The Last Unicorn as YA. It is definitely appropriate for readers in that category, but like most classics, I think it can be read and enjoyed by anyone of any age. Even if like Molly, the unicorn comes to you when you are no longer new, it’s never too late to meet her.

Have you read The Last Unicorn? What are your thoughts on this classic story?

Our romance-themed entertainment site is on a mission to help you find the best period dramas, romance movies, TV shows, and books. Other topics include Jane Austen, Classic Hollywood, TV Couples, Fairy Tales, Romantic Living, Romanticism, and more. We’re damsels not in distress fighting for the all-new optimistic Romantic Revolution. Join us and subscribe. For more information, see our About, Old-Fashioned Romance 101, Modern Romanticism 101, and Romantic Living 101.
Pin this article to read later! And make sure to follow us on Pinterest.
By Dixie-Ann Belle on February 2nd, 2016

1 thought on “Go On A Quest With The Last Unicorn: Vintage Book Review”