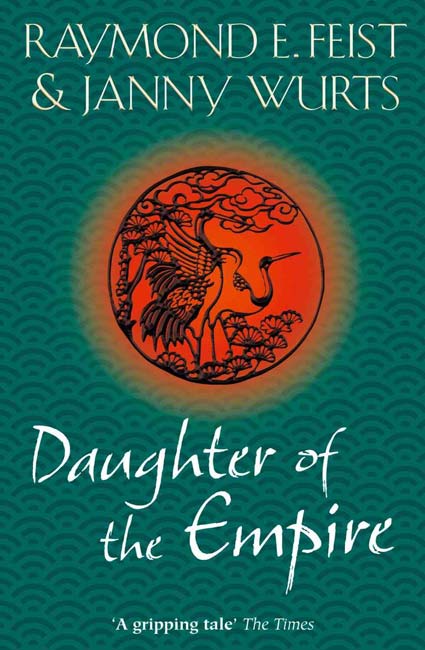 Book: Daughter of The Empire

Daughter of the Empire is the first in a trilogy of fantasy books written by Janny Wurts and Raymond E Feist. They take place in Kelewan, a land mentioned in Feist’s Riftwar Saga. The Empire series, however, is not a traditional fantasy adventure like its predecessor.  It is more of a political fantasy series like the A Song Of Ice and Fire series by George R R Martin. The similarities end there though.

Daughter of the Empire tackles intrigue and political battles in a very different manner. It also does not take a quasi-Medieval Europe as its setting which, though it woks well for Martin, has become a little overdone. Indeed, the Empire series contains some of the most original and imaginative world-building I have ever come across. Tsurani culture is a blending of Feudal Japan and Ancient Rome, a combination that works surprisingly well.

Seventeen year old Mara of the Acoma is about to take vows and become a Priestess of Lashima. The ceremony is interrupted by the arrival of a family general with news from home. Her father and brother have both been killed on the battlefield. As the last remaining member of the Acoma line, Mara now must take up the role as head of her household and clan, with almost no preparation. The great loss to their enemy, the Minwanabi, has left her house depleted and vulnerable to attack. Mara must act quickly and use all her wits to avoid her name being stamped out forever.

I am always skeptical about author collaborations as the result is often uneven or lacking a unified voice. In this case though, they create magic together and far surpassed my expectations. Having glanced, albeit briefly, at separate novels of Feist and Wurts, I believe that they actually work better together than apart.

The world in which the characters live feels fully realised. Mara is an extremely headstrong, resourceful and intelligent main character. She handles the problems she faces in ways the reader does not always expect. Admittedly, Mara does seem a little too perfect at times, but she remains sympathetic throughout her struggles and does come very close to losing everything. The character travels a varied and unusual path from a young girl ready to give her life to religion to a wise and capable leader able to play the Game of the Council with impressive skill.

The prose is crisp and the pace never lags. From the very beginning, you are gripped and enchanted by the strange world and exciting narrative. You grow to love Mara. There is also Arakasi, her enigmatic spy master, Nacoya, her crotchety nurse, Lujan, a playful grey warrior and Keyoke and Papewaio, her loyal generals. All of these characters are well-developed and enjoyable to read about as they aid Mara in her journey.

Despite being the first in an immersive and detailed trilogy, the book can be read as a standalone. It is also not necessary to read the Riftwar saga in order to understand Daughter of the Empire.

If political fantasy is really not your cup of tea then it may not be for you. While I believe the book would appeal to many different types of people, I think this is an especially appealing book for women who enjoy fantasy. Though it is not as rare is it once was, it is extremely refreshing to find such a well written, complex and powerful female character at the helm of an epic fantasy series.

If you enjoy sweeping political sagas, complex characters and fascinating fictional worlds, then Daughter of The Empire is definitely for you.

Our romance-themed entertainment site is on a mission to help you find the best period dramas, romance movies, TV shows, and books. Other topics include Jane Austen, Classic Hollywood, TV Couples, Fairy Tales, Romantic Living, Romanticism, and more. We’re damsels not in distress fighting for the all-new optimistic Romantic Revolution. Join us and subscribe. For more information, see our About, Old-Fashioned Romance 101, Modern Romanticism 101, and Romantic Living 101.
Pin this article to read later! And make sure to follow us on Pinterest.
By Elinor Cackett on April 9th, 2015