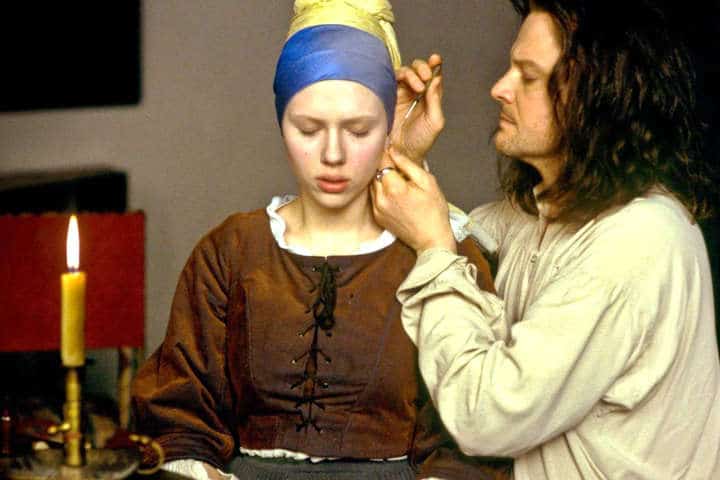 Girl with a Pearl Earring Review

Girl with a Pearl Earring is based on a novel by Tracey Chevalier. The source material creates a backstory for the portrait of the same name by Dutch painter, Johannes Vermeer. Although the identity of the beautiful girl who inspired Vermeer to paint his masterpiece is elusive, Chevalier crafted her story based on a series of clues on Vermeer’s life.

It should be noted that I was slow to see Girl with a Pearl Earring. It was during a resurgence of my love of Colin Firth that I saw the film in mid-2000. While still broody and arguably taciturn, Colin Firth has long hair, a scruffy jaw and does not resemble Mr. Darcy in any way.

Don’t Get Caught Up In His World

Set in 1665, the story begins with Griet (Scarlett Johannson), a 17-year-old sent to work in the household of Johannes Vermeer. The household is troubled; a noisy cacophony of sound, filled with adults and children who see Griet as inferior. At the heart of the home is its temperamental breadwinner, Vermeer (Colin Firth) whose ability to produce works of art is the main source of income for the family. Making the situation dire is the fact that Vermeer’s wife Catharina (Essie Davis) is once again with child, adding another mouth feed.

He saw things in a way that others did not, so that a city I had lived in all my life seemed a different place, so that a woman became beautiful with the light on her face

Vermeer, however, is far from winning the husband of the year award. As an artist, his output is driven by a temperamental muse. Despite commissions by a wealthy, arrogant patron, Van Ruijven (Tom Wilkinson) the family always seems one step from debtors prison. In spite of his household’s eccentricities, Griet finds Vermeer and his work intriguing. Tasked with cleaning his studio, she develops an interest in the room and its artistic contents. Griet has an eye for colour and detail, something Vermeer quickly notices. Discovering his maid as his latest muse, Griet becomes somewhat of an apprentice to Vermeer and helps him mix paints and discuss some of his composition and works. For Vermeer, she is a breath of fresh air, someone who understands his passion and encourages his artistic endeavours. His wife is jealous, underscored by his response to her query around why he would not paint her. Simply he states, “because you don’t understand.”

Stifled by the class structure of the day, Vermeer and Griet are unable to act on their budding attraction. Complicating matters is the fact that Vermeer is dependent on a patron and financier who has his eye on Griet.

You’re A Fly In His Web… We All Are 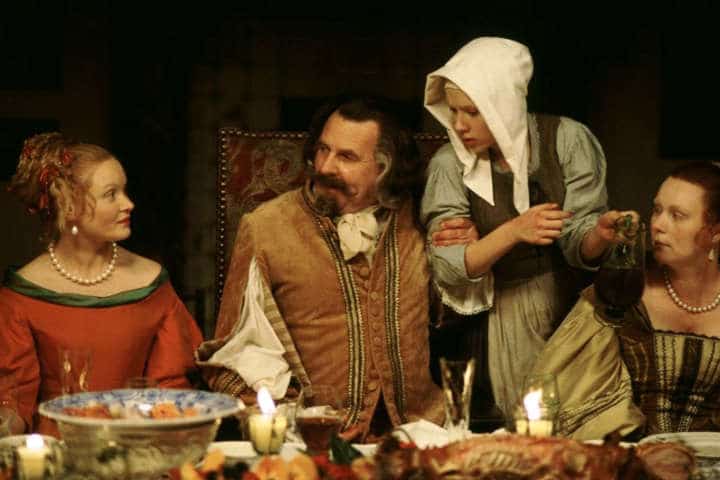 Girl with the Pearl Earring is sensitively handled by Peter Webber. The film sticks closely to the source material and yet remains captivating. The set design is incredible as the use of colours emphasises the world Vermeer lives in.

You’re so calm and quiet, you never say. But there are things inside you. I see them sometimes, hiding in your eyes

In particular, Webber is able to recreate the lighting made so famous in Vermeer’s work. The score, like the beautiful cinematography, is incredibly haunting and gives life to the fragile relationships that permeate the film.

You Looked Inside Me 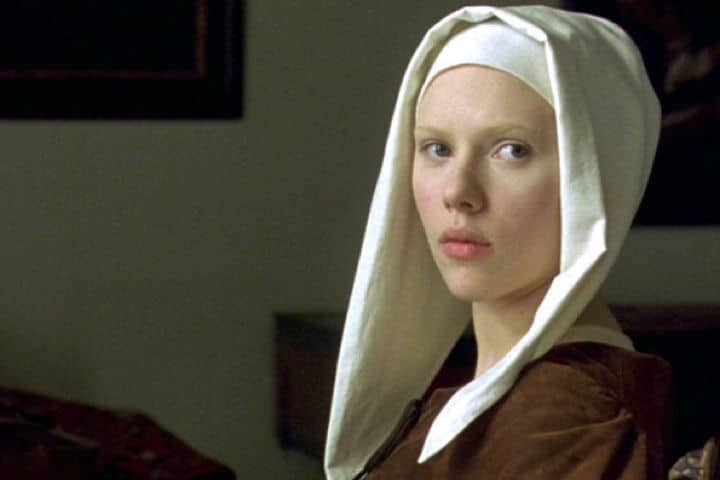 As Vermeer, Colin Firth is distant and distracted. When he eventually notices Griet, their attraction is all the more powerful because of his moody indifference. Vermeer is taciturn and eccentric and it’s fascinating to see his appreciation for Griet slowly colour his view.

Scarlett Johannson is incredibly beautiful as Griet. She has an uncanny resemblance to the actual subject of Vermeer’s painting. She deserves praise for her ability to play Griet as she should be – unpretentious and natural. And this is a quality that Vermeer veritably inhales. The tangible sexual chemistry between Firth and Johannsen is palpable. They manage to create a strong emotional bond that is quite spellbinding.

Girl with the Pearl Earring is not without fault, however. The story suffers mainly from a lack of decent characterisation and growth. Colin Firth is wonderful, but he merely scratches the surface of an incredibly complex character. The supporting cast is also mainly wasted in a film that really is all about the artist and his muse. Some might also find the film too meandering and a little light on drama.

Despite its flaws, the wonderful direction, set design and score make this worth a watch.

Our romance-themed entertainment site is on a mission to help you find the best period dramas, romance movies, TV shows, and books. Other topics include Jane Austen, Classic Hollywood, TV Couples, Fairy Tales, Romantic Living, Romanticism, and more. We’re damsels not in distress fighting for the all-new optimistic Romantic Revolution. Join us and subscribe. For more information, see our About, Old-Fashioned Romance 101, Modern Romanticism 101, and Romantic Living 101.
Pin this article to read later! And make sure to follow us on Pinterest.
By Naazneen Samsodien on August 18th, 2017

3 thoughts on “Girl With A Pearl Earring (2003): A Visually Stunning Work of Art”