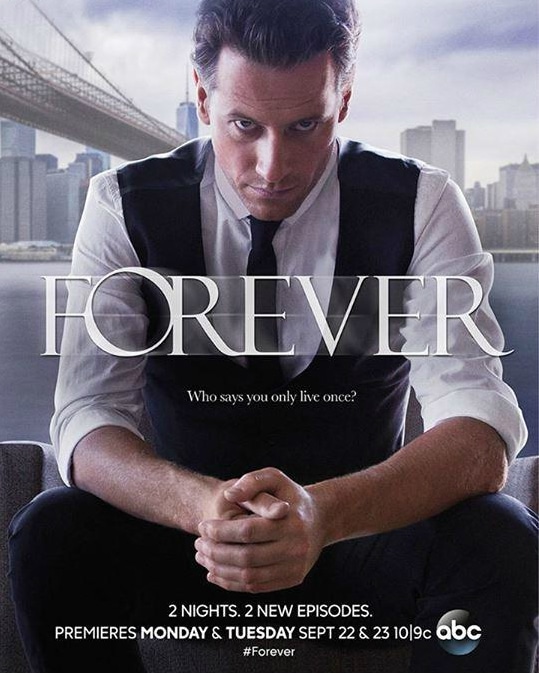 THE SETUP: Doctor Henry Morgan is a medical examiner who also happens to be immortal (and the only one who knows his secret is his confidant Abe). With the skill of Sherlock Holmes, he helps solves crimes with his new partner Detective Jo Martinez.

While an imperfect series, Forever is so far my favorite new pilot of the season. Ioan Gruffudd (King Arthur) as an immortal and on a weekly basis…SOLD. Forever is nothing new, nothing wholly original but it’s altogether fun entertainment with a dry, ironic wit and a strong, charismatic lead which will surely quickly become a cult favorite particularly among the female demographic who love immortal characters. And if you haven’t already guessed, I’m one of them.

The first few minutes of the series really hooks you with a suspenseful train sequence where everyone is killed in a huge crash, except for him that is… You quickly learn he’s immortal and that every time he dies he wakes up in public places of water (which can be very awkward mind you). What quickly sold me on the series was the fact that the writers know how to utilize Ioan’s skills. So watching Ioan as Dr. Henry Morgan in the past on a ship defending a slave made me question whether or not the show was specifically written for him (or at least tailored to his strengths after he was cast) in a scene reminiscent of the righteous William Wilberforce in Amazing Grace. For period drama fans, this is a nice moment with the promise of future period flashbacks which were actually done quite well. 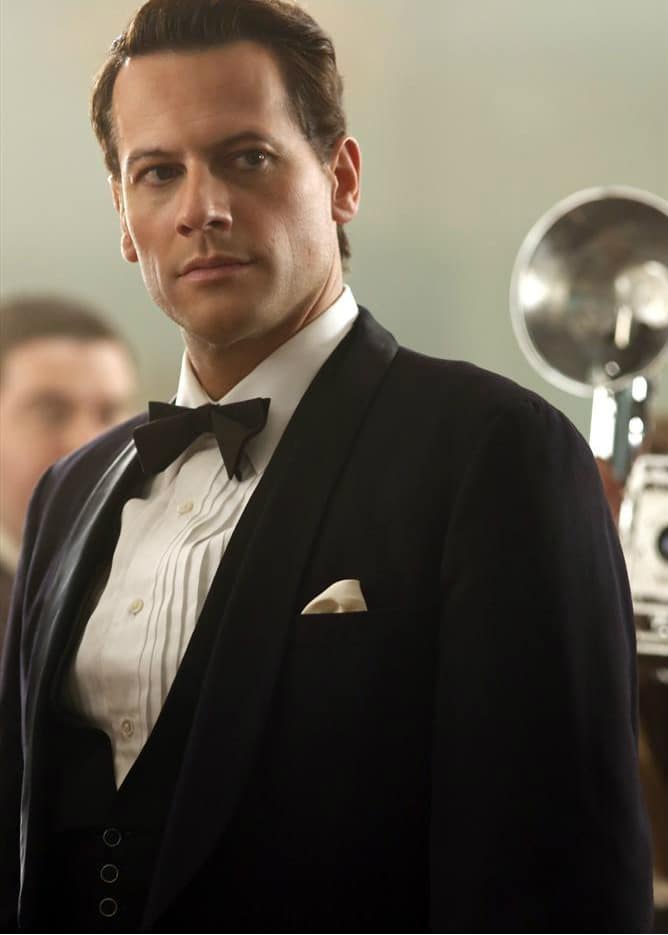 By the second episode, the writers really start to develop the dry wit they are obviously capable of. When they show the beginning sequence of a guy accidentally dying from an axe when he falls off his roof, it was surprisingly funny (reminiscent of death scenes from Bryan Fuller series Pushing Daisies or Dead Like Me). This type of humor really works. It’s then further explored when Henry attempts to gather clues on a bridge trying to do whatever it takes not to die (he describes falling from a bridge as the 20th most painful way to die), only to be killed by getting hit by a truck moments later after he gleefully succeeds. If the writers continue down this path, and they should, I think they’ll really be able to win over more and more audience members.

One of the biggest strengths of the series is the relationship between Dr. Morgan and Abe (Judd Hirsch). Their relationship is mysterious throughout the first episode and revealed in the end in a nice twist. The chemistry between the two actors is believable and emotional and will no doubt draw people in and hold their interest. If there’s a weak link, it may be the procedural angle. Now I’m not saying they should eliminate this angle. Hardly. But perhaps the cases could be a little harder to figure out. For a character like Dr. Morgan who is so heavily influenced by Sherlock, it’d be nice to see him solving more difficult and intriguing cases without feeling too much like a CBS procedural. Honestly, they should use British television mystery series as an influence in the style of Agatha Christie.

Also, I’m not as yet sold on the chemistry between the two leads. Alana de la Garza as Detective Jo Martinez is okay, but if the writers are planning on a Moonlighting-esque romantic chemistry between her and Dr. Morgan, I’m not completely convinced the two actors together are the perfect fit. They just don’t sizzle like Mick and Beth or Booth and Brennan. But perhaps that will change.

Overall, if you like shows like Moonlight, Sherlock, New Amsterdam or even Pushing Daisies then this may be the show for you. As of now, it is not as good as the shows mentioned, but it’s still entertaining with a lot of potential. If the writers can figure out how to capture what works best in Forever and really focus on that, then the potential of this series is limitless. But even if it doesn’t reach its full potential, I will definitely still watch because it’s still pretty good. And did I mention it has Ioan Gruffudd as an immortal?  I rate it four and a half corsets.

What can I say to explain how much I loved Forever? Starring Ioan Gruffudd (whom I adore) with a premise that reminded me of a blend of Moonlight (my favorite show), New Amsterdam, and Torchwood, I felt hope when I heard the first whisperings of Forever. But could it live up to my high expectations? For the most part, yes it does. Not once throughout the entire pilot did I feel bored or cringe as such as the case for many pilots still finding their sea legs. Forever already knows what it is.

The show jumps into the action almost right away, building an intriguing and mysterious mythology in the midst of the procedural element with also a touch of romance and strong characterization for the lead characters. Shockingly, the period flashbacks were remarkably authentic for an American production, much like what you would see in a BBC Period Drama. I say shocking because typically the costumes and production design look amateurish in comparison. Thankfully, we seem to be turning the corner, Forever just one example. The Period flashbacks also had a wonderful romantic quality to them, the story of his past love equally as interesting as the present story of who caused the train wreck. 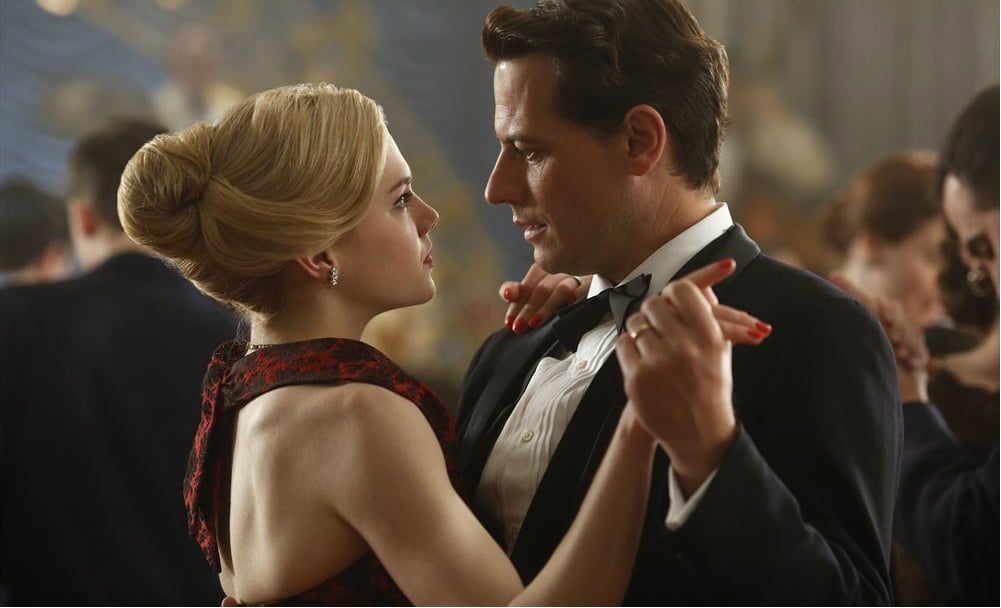 Unlike Gruffudd’s last major TV endeavor Ringer (which I did like), he has found a role more worthy of his immense talent and charisma, a charisma too underappreciated on the big screen. The character Dr. Henry Morgan is not like your average immortal. While there is an underlying loneliness, Morgan still has this optimism of hope that is endearing. His first flashback even echoes back to Gruffudd’s William Wilberforce persona.

Detective Jo Martinez also has potential, if not as much as Morgan thanks to Gruffudd’s performance. She’s smart, flawed, a bit of a wreck, and has a backstory of her own. Could she become a love interest for Morgan? Chances are very high. We’ll just have to see where it goes, but needless to say there is a scene at the end that is very reminiscent of Beth in the Moonlight pilot. As a whole, while not equal in my love to Moonlight, I recommend that anyone who loves a good, romantic urban fantasy should tune in and give this show a shot. I give Forever 5 corsets overall and 4 hearts for romance (this could of course change in the coming weeks to an even better rating).

ABC’s new show Forever has earned the spot as one of my favorite new series this Fall. Ioan Graffudd, who you might remember as the hottie who played Lancelot in King Arthur or Mr. Fantastic from The Fantastic 4, fits perfectly into the role of the Sherlock Holmes-esque Dr. Henry Morgan. Think of this show as a more positive and uplifting version of the Sherlock Holmes story amidst all of its more snarky and darker competitors, such as Sherlock and Elementary. In this version he’s just as clever and performs the same trick of deducing astonishing facts from minute details, but he’s a glass half full kind of guy. The other difference is that this Holmes just happens to be 200 years old and is cursed to never die.

ABC makes sure to provide us with all the usual supporting characters as well. Dr. Watson comes in the form of Dr. Henry’s bosom friend Abe, his one confidant and right hand man. They even throw in a possible Moriarty figure in the form of a mysterious man also cursed to live forever, who has mysteriously began calling Henry, implying that he’s been watching him and knows about his curse. To top off the comparison, Henry even ends up becoming an unofficial consultant to the police, working alongside the sexy hard-nosed Detective Jo Martinez, who looks to be our potential love interest. While I can’t say the show is doing anything too groundbreaking, it was definitely an enjoyable watch. Ioan Graffud is a joy to watch (and not just because he’s gorgeous) as usual, and the show gives its audience a nice larger mystery to chew over while we’re watching Henry do his sleuthing. It’s entertaining and I’m definitely curious to find out more about this curse that makes one live forever. So, I’ll definitely be staying tuned. I rate it 4 1/2 corsets.

What did you think of Forever? Leave a comment!

Our romance-themed entertainment site is on a mission to help you find the best period dramas, romance movies, TV shows, and books. Other topics include Jane Austen, Classic Hollywood, TV Couples, Fairy Tales, Romantic Living, Romanticism, and more. We’re damsels not in distress fighting for the all-new optimistic Romantic Revolution. Join us and subscribe. For more information, see our About, Old-Fashioned Romance 101, Modern Romanticism 101, and Romantic Living 101.
Pin this article to read later! And make sure to follow us on Pinterest.
By The Silver Petticoat Review on October 3rd, 2014

2 thoughts on “Forever: Three Takes on the New Entertaining Series”