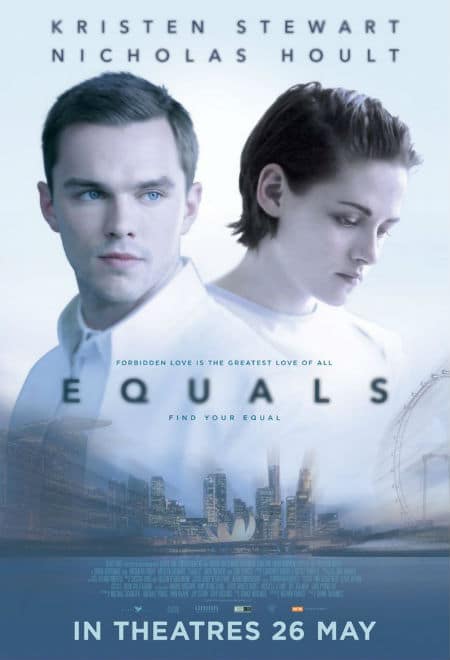 Equals is an independent film that somehow got overlooked and never really received more than a Limited Release in Theaters. This is surprising considering the film stars the box office winners Nicholas Hoult and Kristen Stewart. With a little promotion, certainly, Equals could have done well.

Now, I know it’s become popular to “dislike” Kristen Stewart because of Twilight (I happened to like the first film) and the media attention surrounding her. But I don’t think that’s quite fair. I have seen her in quite a few films and she can actually act despite all the bully like memes out there. Does she have to be to everyone’s taste? Of course not. But I wish the discussion surrounding her acting would be steeped in intellectual discussion rather than meanness and/or the Twilight argument. (I remember the backlash of Titanic and how it took years for guys to admit Leonardo Dicaprio could actually act. Yes. This. Was. A. Thing.)

Besides the Kristen Stewart issue, critics were a little bit harsh toward Equals which I feel is just a continuous trend of critics trying to kill off the romance genre. Often, romances that don’t have the R Rating stamp of approval (as if racy scenes and scantily clad women improves a love story), gets a “rotten” rating. As do many of the so-called “chick flicks,” or even adaptations of YA books about women written by women. Perhaps this is because most of the critics are men and don’t like or understand the genres they are critiquing.

C.S. Lewis, himself, had something to say on the matter. He wrote the following quote in his essay, “On Science Fiction”:

“Many reviews are useless because, while purporting to condemn the book, they only reveal the reviewer’s dislike of the kind to which it belongs. Let bad tragedies be censured by those who love tragedy, and bad detective stories by those who love the detective story. Then we shall learn their real faults. Otherwise we shall find epics blamed for not being novels, farces for not being high comedies, novels by James for lacking the swift action of Smollett. Who wants to hear a particular claret abused by a fanatical teetotaller, or a particular woman by a confirmed misogynist?”

Well, I completely concur! I may “critique” films but I try to review from genres I love and without the spirit of vehement cynicism.

Recently, Shannon Plumb, filmmaker and wife of Derek Cianfrance (Director of the new period romance, The Light Between Oceans), wrote about what she felt were the over the top negative reviews for the film.

“If a romance film like this doesn’t do well, the chances of making other films like it will die. The critics are killing off genres like hunters with the dodo bird. A lot of us love dodos.

Beware, our Gone With the Winds might be gone with the wind. The romance genre is in danger of becoming extinct. People are losing their ability to be romantic. They barely notice each other anymore as they say “I love you” with an emoticon and hold phones instead of hands. And the critics, like lemmings, are jumping off the cliff with all the other unsentimental rodents.”

I, like Shannon Plumb, happen to love the dodos. And I think it’s important to keep GOOD romance in film, literature, and television alive and well.

What Equals is, is a great romance.

Yes, it is part dystopian, part Sci-Fi but at the heart of the film is the love story – one more about emotional connection than lust. Equals tells the story of a utopian-like society where people suppress all emotions. If a person begins to “feel,” they are diagnosed with a serious condition like cancer and go through various stages until they are sent away (basically to die).

Silas (Nicholas Hoult) finds himself noticing triggers of suppressed emotion on the face of Nia (Kristen Stewart) – a woman who works near him. Curious about her seemingly emotional reactions, he begins to “feel” and is diagnosed as a Stage 1. Silas becomes more entranced by Nia and follows her around until he learns her secret: that she can completely feel and is pretending to be emotionless in order to survive.

The two grow closer and begin to fall in love as Silas’s humanity reawakens. Of course, any kind of romantic contact between men and women are forbidden, so they meet in secret and soon devise a plan to run away.

Will they be able to escape this world together or will their star-crossed fates ultimately lead to their doom?

There are actually a couple twists I didn’t see coming, especially considering there are quite a few structural similarities to Romeo and Juliet. If you pay attention closely, you’ll see what I mean.

Besides the engaging premise, Hoult and Stewart are perfectly cast in this film. They share a natural, believable chemistry and give wonderful performances. Even if you’re not a Stewart fan, you should be able to appreciate her in Equals as this role truly suits her.

Drake Doremus (Like Crazy) also once again proves he has an eye for romance and good storytelling as he directs the film with style and vision.

Now, I’m not saying Equals deserves an Oscar but it’s a quiet film that triumphs in smaller ways. It is also much better than the critics give it credit for. The film tugs at the heart strings and leaves you thinking about the meaning long after the movie ends.

Sure, some might find this film a little slow. Equals is definitely not for everyone. But if you appreciate a thought-provoking romance and character driven stories, then Equals may be worth your time.

Equals is now available to rent on VOD and buy on DVD.

Do you feel like romance films are becoming extinct? Did you see Equals? What’s your thoughts on this film? Let me know in the comments!

Our romance-themed entertainment site is on a mission to help you find the best period dramas, romance movies, TV shows, and books. Other topics include Jane Austen, Classic Hollywood, TV Couples, Fairy Tales, Romantic Living, Romanticism, and more. We’re damsels not in distress fighting for the all-new optimistic Romantic Revolution. Join us and subscribe. For more information, see our About, Old-Fashioned Romance 101, Modern Romanticism 101, and Romantic Living 101.
Pin this article to read later! And make sure to follow us on Pinterest.
By Amber Topping on September 17th, 2016