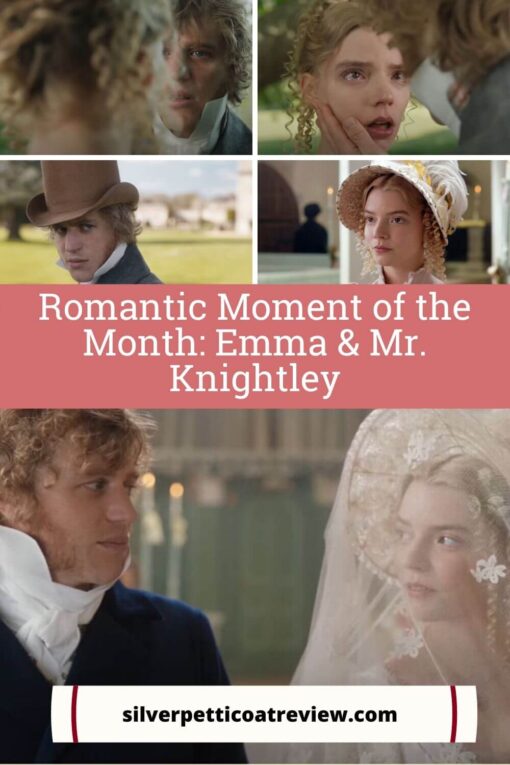 What’s not to love about Emma and Mr Knightley’s proposal scene in the latest Jane Austen adaptation?

Emma and Mr Knightley often live in the shadows of other more popular Jane Austen couples. Sure, Emma isn’t a story of pride, prejudice, gothic mansions, or second chances. Instead, Emma and Mr Knightley’s love story builds on a deep foundation of friendship.

Yes, Mr Knightley scolds Emma (and rightfully so at times) but not to be condescending. Rather, he helps Emma find her best self. And she does. She listens. Undoubtedly, the greatest love stories are about finding the one person who makes you better.

Furthermore, let’s also not forget Mr Knightley’s grand gesture and sacrifice. He moves into Emma’s home to help take care of her father. This swoony romantic and selfless hero could have lived at his own impressive estate and maintained his independence. But he doesn’t.

Emma is a love story about trust and a marriage based on an equal partnership, and that’s what I love about them. Their romance is rather remarkable for the time period and deserves far more recognition.

And with Emma recently released on DVD/Blu-ray, I couldn’t imagine highlighting a more romantic moment than from the words of Jane Austen, who created the epic romance of Emma and Mr Knightley.

Mr Knightley: With whom will you dance?

Emma Woodhouse: With you. If you will ask me. You have shown that you can dance, and we are not really so much brother and sister as to make it improper.

At first, I didn’t know what to think about Autumn de Wilde’s stylish and colorful adaptation. Was it too trendy and modern? Mr Knightley (Johnny Flynn) sexier than the character ought to be? However, halfway through, my hesitation transformed into complete enjoyment, and I happily immersed myself into the stunning and visual world Autumn had created for us.

Certainly, there were several romantic moments to appreciate over the past couple of months. Still, I found the Emma and Mr Knightley proposal scene to be both loveable and heartwarming, bloody nose, and all.

Emma and Mr Knightley – The Lead-In

Emma Woodhouse (Anya Taylor-Joy) loves interfering in the love lives of others. She thinks she’s a talented matchmaker after her success with her governess. Unfortunately, for poor Harriet, that is, she’s not. Harriet learns the hard way with the pompous Mr Elton, who only had eyes for Emma. Emma, who has no need or desire ever to marry.

RELATED | REVIEW: THE JANE AUSTEN SOCIETY IS THE MUST-READ NOVEL OF THE YEAR

But regrettably, Emma’s meddling has terrible consequences. Or so she thinks that is. Emma realizes her own feelings for a particular gentleman a little late. When Harriet turns her broken heart to Mr Knightley, Emma must resolve her own feelings and realizes she loves Mr Knightley. Could it be that her Mr Knightley loved another? Was she too late?

Meanwhile, Mr Knightley understandably believes Emma is disappointed about the news Frank Churchill is engaged to Jane Fairfax. Nevertheless, he must tell Emma how he feels.

While pondering her feelings, Mr Knightley walks towards Emma in a scene that does Matthew MacFadyen’s Darcy proposal walk proud. He tells her that “Time, my dearest Emma, time will heal the wound.” But Mr Knightley is “mistaken” in Emma’s feelings regarding the devious Frank Churchill.

Mr Knightley: You will not ask me why. You are determined, I see, to have no curiosity. You are wise. But I cannot be wise. I must tell you, Emma, what you will not ask, though I may wish it unsaid the next moment.

Emma Woodhouse: Then do not speak it.

Poor Emma thinks Mr Knightley talks of Harriet. She’s afraid to hear the truth and lose him forever. Mr. Knightley walks away, but Emma realizes she’s in the wrong. She must know the truth, whatever it may be. “As a friend.”

As a friend. Emma, that, I fear, is a word… Tell me, Emma, have I no chance of ever succeeding? My dearest Emma, for dearest, you will always be. My dearest, most beloved Emma, tell me at once. I cannot make speeches. If I loved you less, then I might be able to talk about it more, but you know what I am. I have lectured you, and I’ve blamed you, and you have borne it as no other woman in England could have borne it. God knows I have been a very indifferent lover. But you understand me. You understand my feelings.

After awkwardly rambling through his confession, Mr Knightley gently touches her tearful, astonished face, and then he asks her to marry him.

Can a speech be any more swoony than that? But the scene between Emma and Mr Knightley becomes even more adorable with an added touch, not in the book. Emma’s nose bleeds in a quirky way that matches the stylistic choices of the film.

“No,” she can’t marry Mr Knightley because of Harriet! But obviously, she will marry him, and both leave the scene happy with thoughts of their future.

But first, she needs to talk to Harriet and fix her own mistakes.

Then, there’s the dreaded talk to look forward to with Mr Woodhouse, who despises change. But with Mr Knightley’s grand romantic gesture, Emma and Mr Knightley kiss, and the movie ends with a beautiful wedding. It’s everything a lovely and romantic Jane Austen movie adaptation should be.

What are your thoughts on the latest adaptation of Emma and the portrayal of Emma and Mr Knightley? Were you okay with the nose bleed, or do you think it detracts from Jane Austen’s original proposal scene? Sound off below…