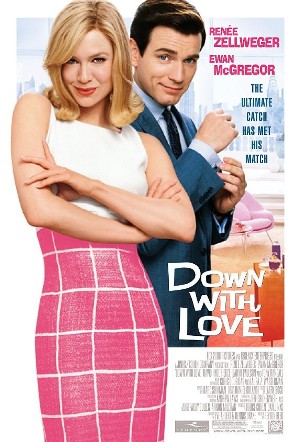 Full of hilarious innuendoes, over the top performances by Ewan McGregor and Renee Zellweger, and a spectacular hate-to-love romance, Down with Love is hands down the most delightful movie I have ever seen! It is theatrical and cheesy, but also clever enough to know it – making it absolutely delicious. It’s also quite similar to Pillow Talk with Doris Day and Rock Hudson from 1959.

The hate-then-love romance that is the driving force of the film is absolutely beautifully executed. Renee Zellweger is Barbara Novak, a polished progressive woman who shows up in New York City as her new bestseller – Down With Love – is taking over the country. 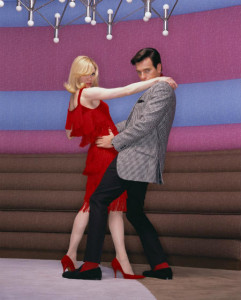 It’s 1962, and she has fur coats, a blonde bob, the daintiest jaunt you have ever seen, and a fast-talking publisher best friend Vikki (Sarah Paulson).

Novak’s book promotes women being equal to men in the workplace and the bedroom. Together, they’re ready to take down the men standing in their way – including the too-charming men’s journalist, Catcher Block, played by the swoon-worthy Ewan McGregor.* (If his name is ‘Catcher’ because he catches the ladies…then it’s very accurate for the film.)

In fact, he is so busy being hot stuff and tripping over the constant pile of ladies at his feet that he does not bother to interview Novak for his men’s magazine. Plus, he thinks a bestselling lady author is…whatever.

However, when women begin reading Novak’s progressive book and endangering his chauvinistic ways by demanding to be treated as more than playthings, he takes an interest in her. Unfortunately, she already knows him as the smarmy journalist who could not bother to meet with her and refuses to have anything to do with him.

This ignites the battle of the sexes as he vows to expose her by wooing her to prove that she’s just an old-fashioned woman who wants love and marriage like any other. She’s never seen him (though he’s seen her) so he pretends to be a gawky southern sweetheart to win her over. (His drawling accent, simpleton clothes, and fake naivete only MAKE HIM HOTTER.)

But, he might just have met his match, because Renee Zellweger is full of twists in addition to demure charm and wide-eyed glances!

The 1960s style of this movie is endearing and the costumes, split-screen technique, and street talk are just other great aspects to keep you wholly entertained. I liked the way this satire lightly and artfully addressed women’s rights in the 1960s by showing how women were expected to be secretaries, not bestsellers, and how dating could be a lot less fun for the woman. It’s so rare to find a romantic comedy that excels at comedy throughout the movie and not just in the few parts you’ve already seen in the trailer.  Catcher’s boss, Peter, as the foil to Catcher – a man looking for marriage and love – is adorable to watch. He had some great lines in an already dialogue-strong film. His version of an ideal date is to cook for a woman and treat them equally and is perceived by society as gay or effeminate in the movie.

His relationship with Vikki is flipped for the time period, as she uses him for sex rather than pursuing a relationship with him, leaving him feeling rather used. Catcher, on the other hand, has an apartment made for intimate encounters. He starts off the movie with the attitude of “What is it about the workplace that women can’t handle?” While Novak stews about working with men in publishing: “Men! They want us to fail!” It’s nice to see the sleazy Catcher Block go from sexist to feminist once Novak is done with him. Zellweger and McGregor give such flare to their characters and their obvious chemistry and superb acting make this movie a real treat.

Additionally, I think the title is as clever and cheesy as the movie – “Down With Love” can signify both an attack on love and being sick with it! My favorite aspect was that the film was full of innuendoes and risqué comments and yet rated PG 13 because it stays quite clean. I can’t recommend this enough – after my sister made me watch it, I forced my parents to watch it because it’s so brilliantly funny and romantic and I enjoyed every second.

*Note on Ewan: I didn’t adore Ewan McGregor the way I obviously needed to until I saw this movie because his slick-backed hair, endless shirts and ties and that dashing smile…it was too much for me to handle! The man could be covered with pustules and he would be oozing charm instead of pus.

Our romance-themed entertainment site is on a mission to help you find the best period dramas, romance movies, TV shows, and books. Other topics include Jane Austen, Classic Hollywood, TV Couples, Fairy Tales, Romantic Living, Romanticism, and more. We’re damsels not in distress fighting for the all-new optimistic Romantic Revolution. Join us and subscribe. For more information, see our About, Old-Fashioned Romance 101, Modern Romanticism 101, and Romantic Living 101.
Pin this article to read later! And make sure to follow us on Pinterest.
By Amirah Yasin on September 22nd, 2015

2 thoughts on “Down With Love, Maybe, But Not With Ewan McGregor’s Hotness”