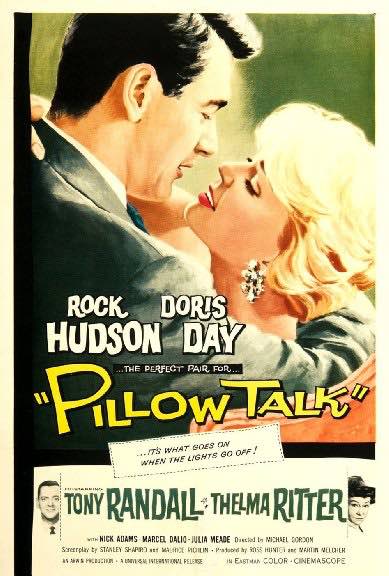 Pillow Talk is the perfect kind of chic-flick, romantic comedy for one of those lazy weekend days when you just want to plop on the couch in your pajamas and watch a movie. It’s light and funny, and the romantic pairing of Doris Day with Rock Hudson reminds me of the iconic pairing of Meg Ryan and Tom Hanks. The plot of Pillow Talk even reminds me a bit of the movie You’ve Got Mail. Both utilize the aspect of two people having two completely different relationships with each other, one in which they are foes and the other where a romantic attraction forms. Seeing as how Pillow Talk is set before the era of computers, however, the mode of communication is a telephone. It even uses the same plot device of the man being the one in on the secret of the double relationship the pair has. Of course, he gets caught in the end, but everything works out as it is supposed to in romantic comedies, with the two ending up together.

Pillow Talk begins with Jan Morrow (Doris Day), a successful interior decorator in New York City, and Brad Allen (Rock Hudson), a talented Broadway composer and incorrigible playboy, being forced into sharing the same telephone line. Brad’s constant monopoly of the line to romance gullible young women infuriates Jan, and thus the two develop a feud over the use of the phone line. The two bicker over who gets to use the line, Jan disgusted by Brad’s tactic of wooing each young woman with the same song that he claims he wrote just for them, and changing his identity for each one. He even has his apartment outfitted with special switches in his couch that can dim the lights, lock the doors, and turn on mood music. I swear I had a flashback to Austin Powers tacky bedroom when I saw this. Anyways, Brad suggests that Jan is just jealous of his popularity with the opposite sex, implying that she isn’t quite so fortunate in that area.

One night Brad sees Jan at a nightclub, and, acting on his attraction towards, her decides to create the persona of Texas rancher Rex Stetson, complete with a fake Texas accent. The two hit it off and begin seeing each other regularly. All the while Brad knows exactly who Jan is, but Jan doesn’t know that Brad is her detested phone line foe. Jan can’t help but brag about her new beau to Brad on the telephone, and he teases Jan in return by implying that Rex is homosexual.

But, as with all good romantic comedies, the ruse can’t last forever. Brad is caught in his lie when he takes Jan away for a romantic weekend to a remote cabin in Connecticut and Jan stumbles upon a copy of Brad’s sheet music. Furious, she storms out of his life. However, Brad has realized that he’s fallen in love with Jan and has no intention of letting her slip away. In a scheme concocted by Brad, Jan’s maid Alma, and Jan’s employer, Brad hires Jan to redecorate his bachelor pad. Wanting some revenge, Jan proceeds to decorate Brad’s apartment in the most hideous and gaudy décor she can think of.

This leads to the big romantic finale we’ve all been waiting for! Furious with Jan when he sees his newly decked out apartment, Brad storms over to Jan’s apartment, and carries her off in her pajamas back to his place, a.k.a. the scene of the crime. In true romantic comedy style, Brad then pours out his heart to Jan, recounting all the ways he’s been making changes to end his playboy lifestyle. Before Jan can reply, Brad turns away to stalk out of the apartment, but Jan cleverly uses one of Brad’s seduction switches to lock the door and turn on Brad’s signature cheesy love song he used on all his previous conquests. Brad turns around to see Jan’s adoring face and the two passionately embrace. As a last clue as to how Brad and Jan’s relationship turns out, sometime later Brad announces to his friend that he’s going to be a father, and as the credits role we see four little pillows on the screen.

Before I get to my thoughts on the movie, I just wanted to mention that it came as a surprise to me when I found out that this film was actually considered racy in it’s time. Pillow Talk takes the old fashioned moralizing of the pre-TV Hollywood and pushes the envelope a bit with the inclusion of subjects like sex, swingers, and homosexuals. What on the surface appears to the modern person as a typical romantic comedy was actually testing the boundaries of the cultural norms and assumptions of the time. One actually has the chance to witness the cultural shift beginning to take place in entertainment and the country at large from the more conservative values of the pre-60s to the more open and liberal values seen in today’s media. I was pretty impressed to learn that what I thought was a simple romantic comedy was actually a piece of evidence of the cultural changes our country has gone through over the years. But enough of that; on to my glowing recommendation of this film.

Let me tell you, I am a huge fan of these kind of cutesy romantic comedies. As I watched Brad and Jan’s antics and their relationship blossom, I gushed, laughed, and sighed at all the appropriate moments. This is the kind of film I could watch over and over again. There are two more films that work as sequels to this one, and I fully plan to watch each one of them too. So, if you’re ever just lazing around on the weekend, think about popping in this timeless film. I guarantee you won’t regret it.

Do you have any classic romantic comedies to recommend? Are you a Doris Day fan? Have you ever seen Pillow Talk? Sound off below…

If you missed the Christmas edition of My Journey Into Old Movies, you can check it out here.

Looking for another romantic film perfect for a relaxing weekend? Take a peak at An Affair To Remember.

Our romance-themed entertainment site is on a mission to help you find the best period dramas, romance movies, TV shows, and books. Other topics include Jane Austen, Classic Hollywood, TV Couples, Fairy Tales, Romantic Living, Romanticism, and more. We’re damsels not in distress fighting for the all-new optimistic Romantic Revolution. Join us and subscribe. For more information, see our About, Old-Fashioned Romance 101, Modern Romanticism 101, and Romantic Living 101.
Pin this article to read later! And make sure to follow us on Pinterest.
By Rebecca Lane on January 16th, 2015