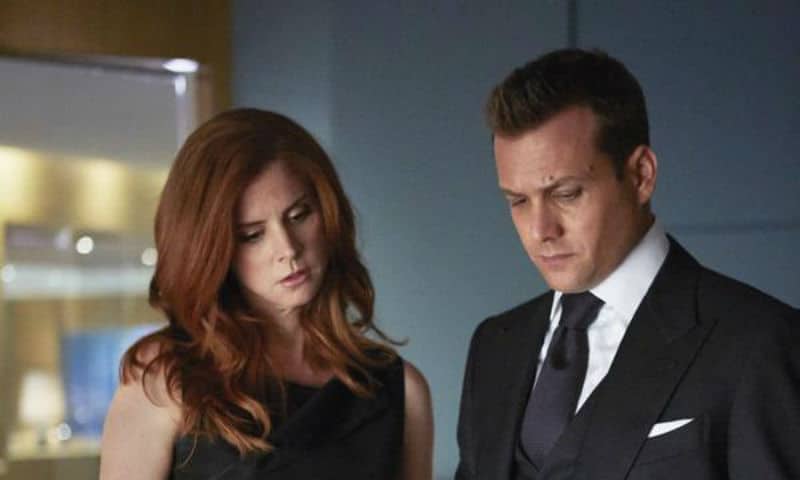 With its slick persona and male heavy promotional photo campaigns, some may not tune into one of the most addicting comedies currently airing on television. I am referring to USA Network’s, Suits. Wildly popular and seemingly becoming more so with its consistent early renewals, the lawyer show is a step up from its competitors, now playing its fifth season. However, we’re returning to its fourth season for today’s romantic moment.

The premise is about a college dropout who fakes his way through being a legit lawyer (he is not) while enjoying grand success at one of NYC’s top law firms. Aware of his secret, he is learning under one of the best, Harvey Specter. The show presents a comedic if not somewhat “tense” front and is promoted as a slick law show with attractive faces and even prettier clothes. It could perhaps be compared to CBS’ The Good Wife, but for me, when it needs to be, this show truly is romantic. Unfortunately, this is lost in the hustle-bustle and law jargon. 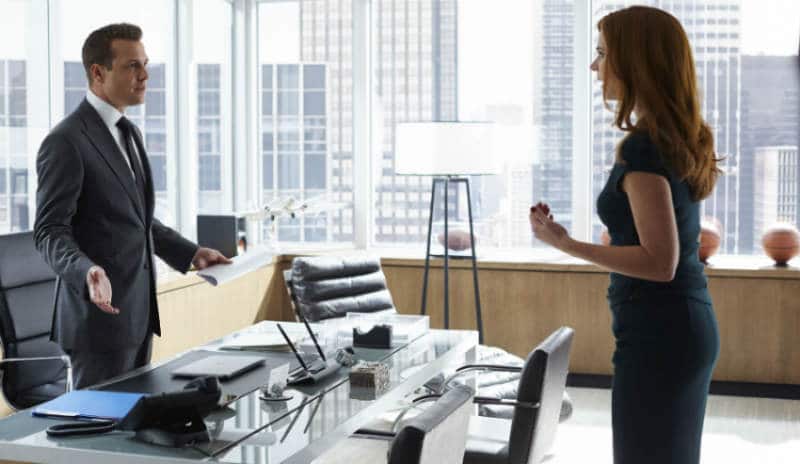 Lost in the younger, more passionate romance of Mike Ross and Rachel Zane, there is actually a more interesting, slow burn kind of romance that I’d wager audiences are not only breathlessly waiting to see realized, but more interested in. That of Harvey Specter and Donna Paulson. Donna and Harvey knew each other long before they began working at their current law firm, but as the woman who knows him best, Harvey arrived at the private law firm (following his work in the DA’s office) with his invaluable secretary in tow. Prior to their boss-employee relationship, the pair had a brief tryst but agreed this would only complicate matters. Since then, they have had a professional (albeit casually professional – Donna’s the only one who can get away with cutting through Harvey’s double-talk) relationship that doesn’t affect their work. Harvey has a very real and sincere connection to Donna. He lets her get away with all she does because beneath his cold exterior, Donna is perhaps the only woman he has loved.

This continues on until Donna is threatened with jail time following an illegal act she commits. Looking for some sympathy from Harvey, instead all she gets is his scorn for what she did and disgust for the actions that led to this case (and all he has to do to get her out of it). Describing their relationship to anyone who hasn’t watched Suits may be hard to perfectly convey, but this brings us up to speed on the short version of this five-year relationship. Today, I’m featuring a moment that brought this couple to a kind of crossroads, and knowing Harvey’s usual feelings and omissions, a beautiful one at that.

Proving Donna’s case (which may have potentially ended in not just taking Donna from Harvey’s life, but serious jail time) was about trumped up charges was no small feat, but Harvey being Harvey, does just that. The pair celebrates his victory and her freedom at Donna’s apartment. With two wine glasses and a bottle of wine in her hand, Donna joins a relaxed Harvey sans his suit jacket on her couch. 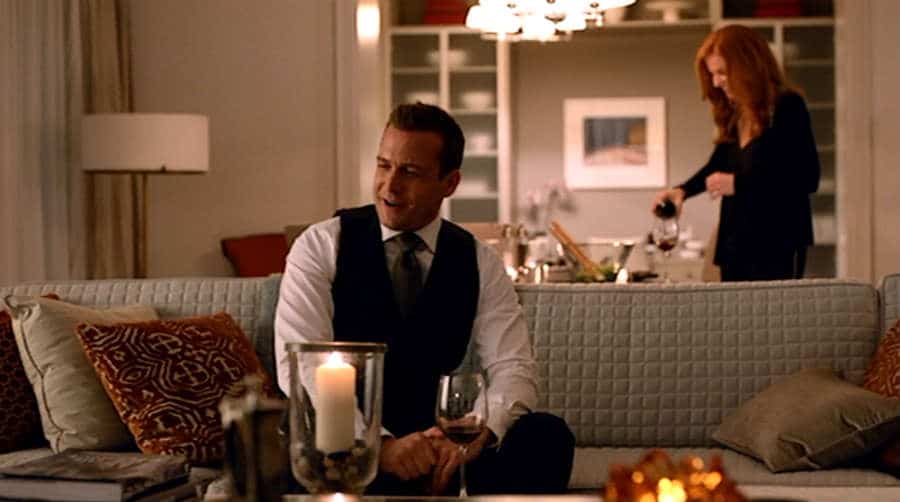 They banter back and forth over a shared memory involving a social event at Donna’s home in which Harvey spat a piece of shrimp across the room right into Donna’s mother’s hair. In a moment of quiet, Donna puts all the anecdote stories aside and expresses what she wanted to all night. She shifts on the couch to more fully look at Harvey and says, “thank you, Harvey.” 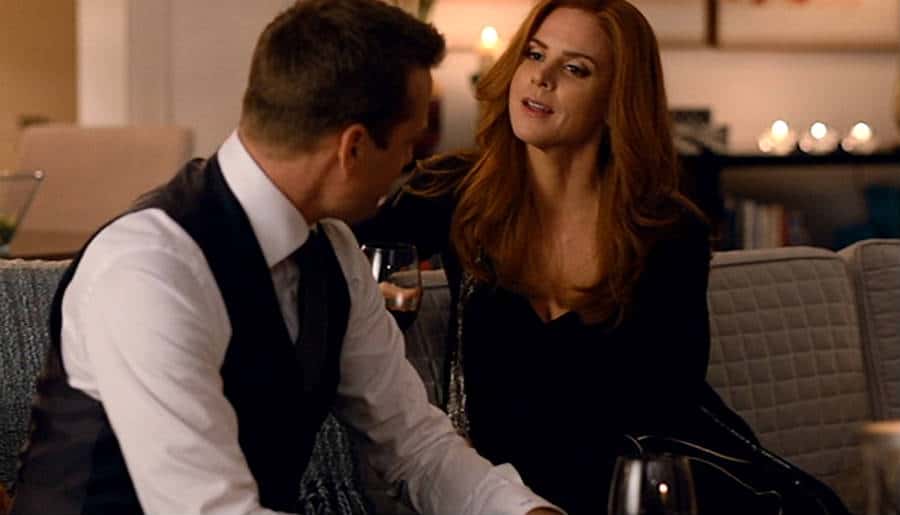 Looking at her with a sincere expression, he replies. “You don’t need to thank me. You already thanked me.” 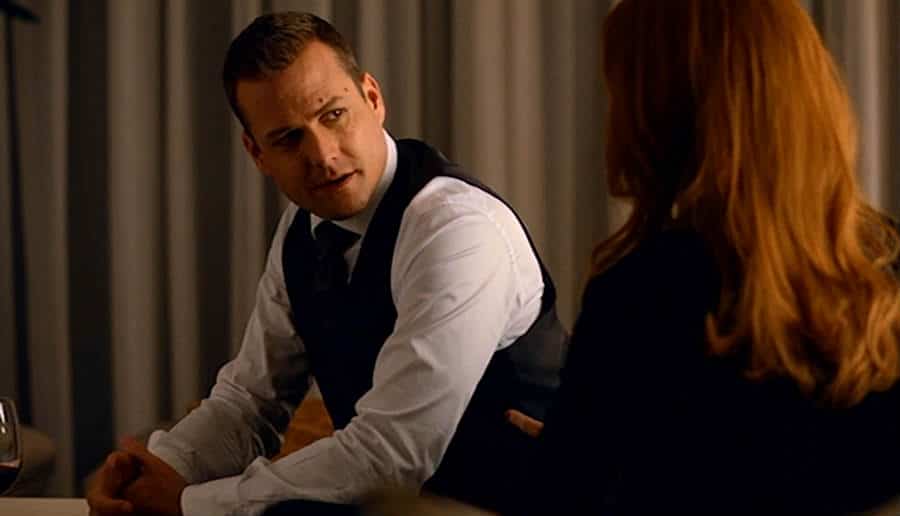 Donna clarifies, “No, I thanked you for fixing it. Now I’m thanking you for not bringing it up all night.” 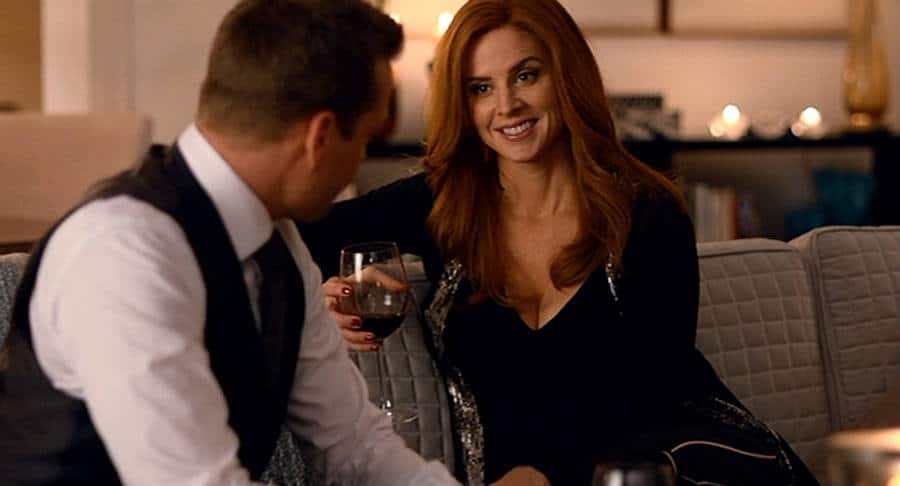 Responding in kind and with the utmost sincerity, he says, “I just figured if you wanted it brought up, you’d bring it up, and now you have…” With genuine affection, he says, “…So, um…” Taking a moment to collect his thoughts, he reaches for his wine glass as Donna’s face registers expectation of what he’s about to say. He continues, “I told you I’d never let anything happen to you, and I won’t ever, so you don’t ever have to feel scared like that again.” 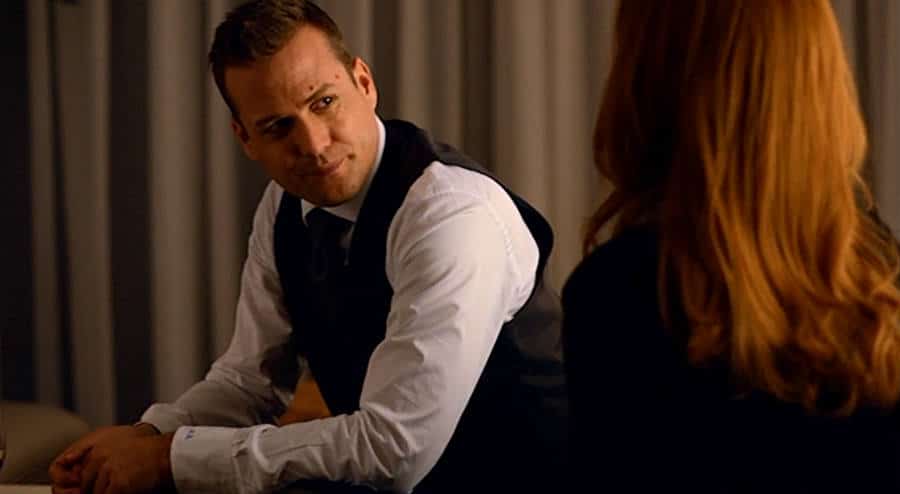 Smiling with a bit of sass, she counters, “I thought you said you didn’t do the comfort thing.” 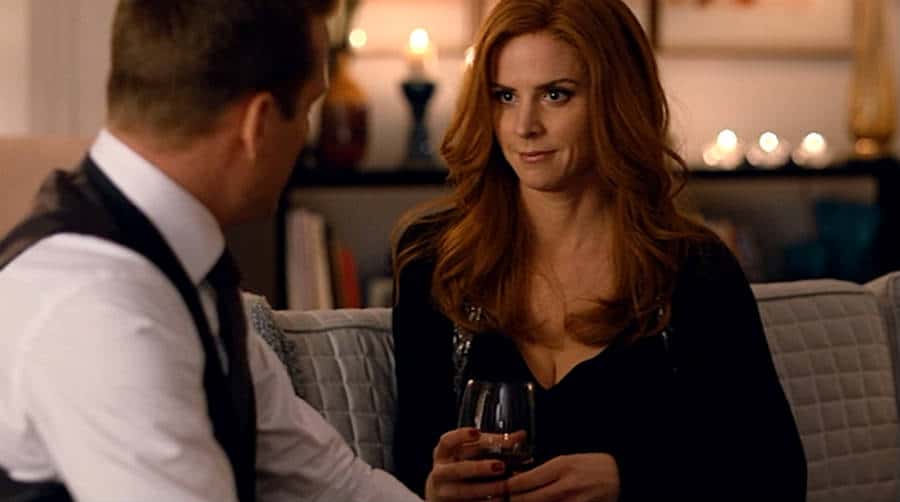 “I didn’t say I didn’t do it.” A smile forms, the two seem to be back to their usual banter. “I said I didn’t have time because I was so busy saving your ass.”

Taking on a more serious tone, she apologizes for ever wanting Harvey to hand over her case. “I’m sorry I doubted you.”

The apologies continue when he replies, “I’m sorry I snapped at you.”

Looking past Donna for a moment, a far off look crosses his face before he continues. He lays his heart on the line with his next words without actually saying those three little words. “Anyone else ever loses faith in me, it doesn’t matter. But with you, it’s different.” 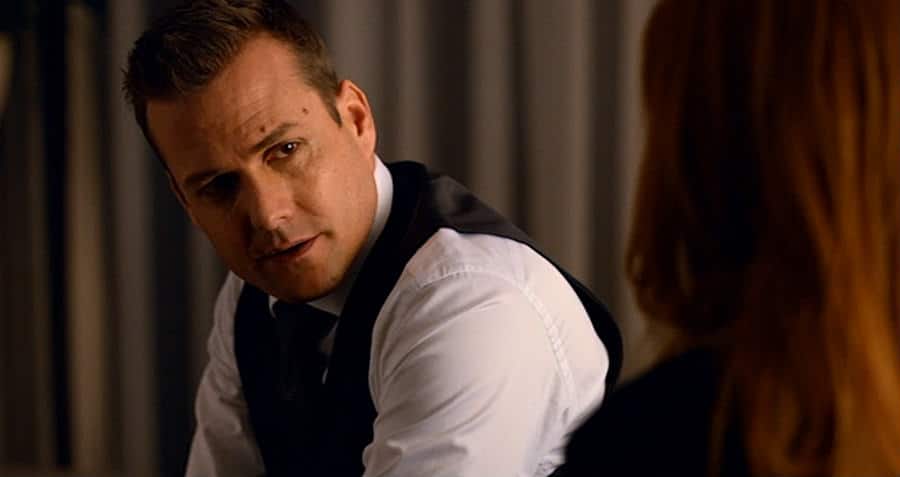 Switching to Donna, the camera captures an expression of surprise and perhaps even hope. 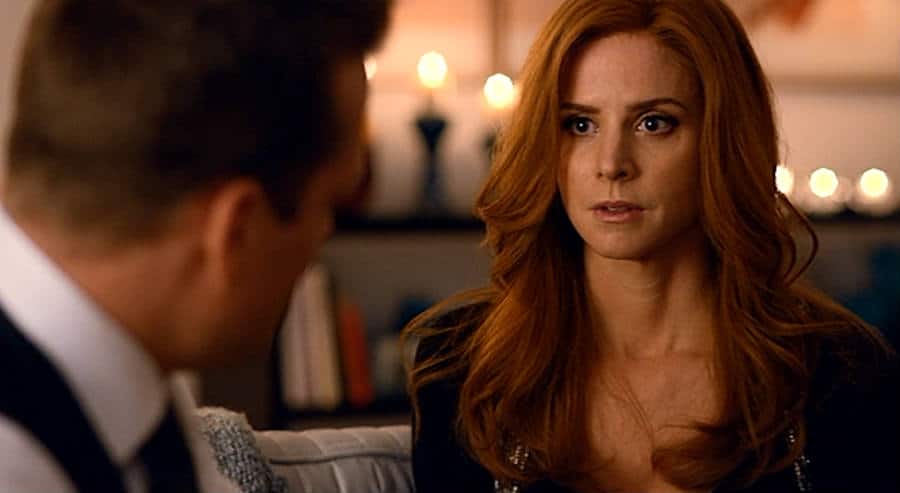 They simply look at one another for a moment, quiet reigning. Then, as if the very words he just spoke weren’t of great significance, quietly he continues, “I should go.” 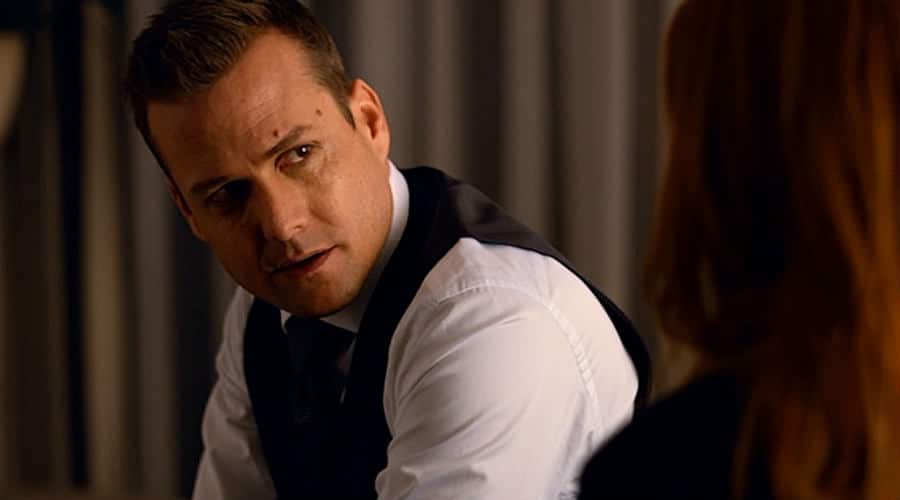 Harvey rises from the couch and walks over to Donna’s table, picking up his jacket. Slightly shaking her head to his retreating back, he turns when she speaks. 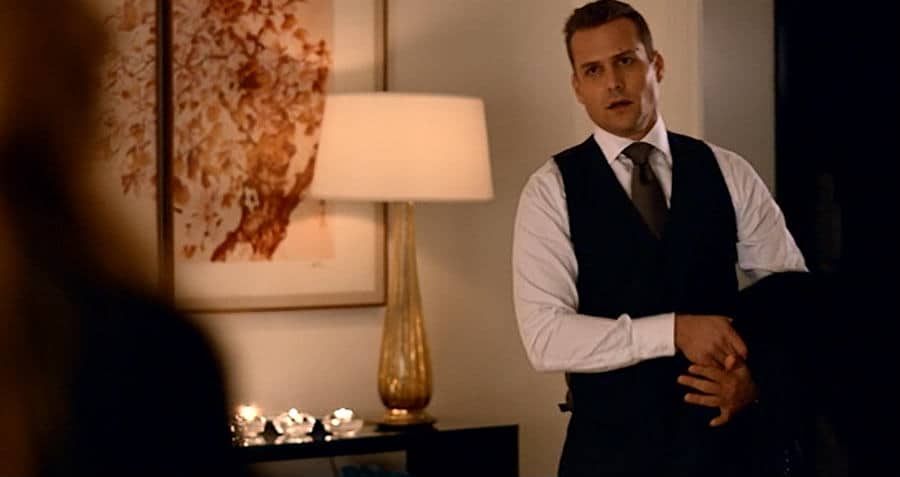 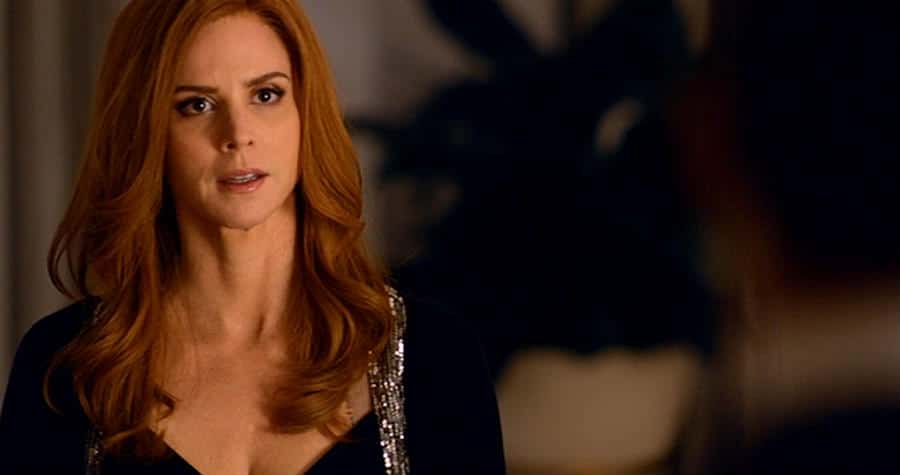 More himself, with confidence, he replies, “You know why.”

In a very unusual turn, something of an unguarded look passes Harvey’s face and with those important words he changes their relationship. “You know I love you, Donna.” 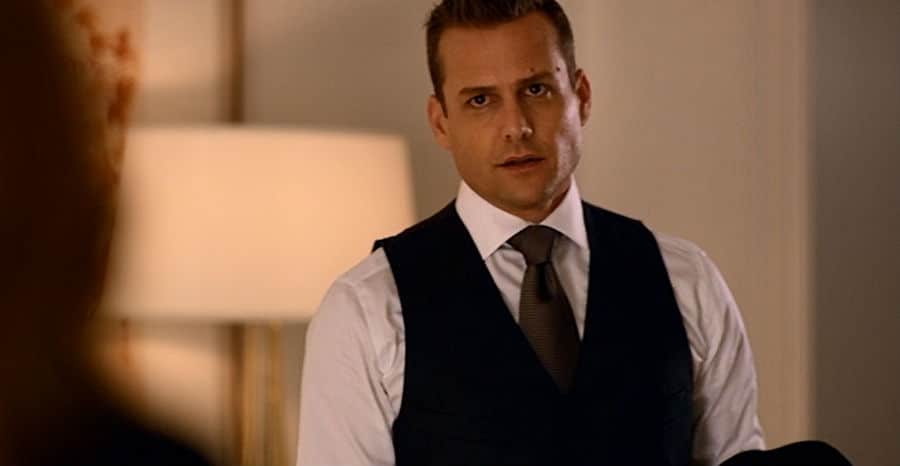 Turning away, he walks through her door, leaving behind an unusually befuddled Donna. 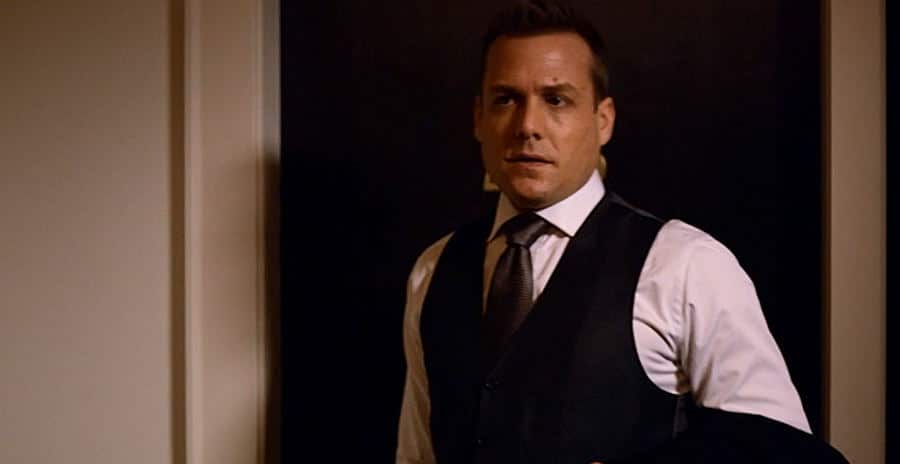 Did you see this moment on Suits fourth season? What did you think of it? Are Harvey and Donna destined to dance around this confession or do you think it will become the cornerstone for a new relationship between them? Comment down below with any of your thoughts.

Our romance-themed entertainment site is on a mission to help you find the best period dramas, romance movies, TV shows, and books. Other topics include Jane Austen, Classic Hollywood, TV Couples, Fairy Tales, Romantic Living, Romanticism, and more. We’re damsels not in distress fighting for the all-new optimistic Romantic Revolution. Join us and subscribe. For more information, see our About, Old-Fashioned Romance 101, Modern Romanticism 101, and Romantic Living 101.
Pin this article to read later! And make sure to follow us on Pinterest.
By Rissi JC on September 5th, 2015