THE MOMENT: Hunter says “I love you.”

Five years later, even now I can still remember reading about Beastly when it was in early production stages. Being the fairytale addict I am (not to mention enjoying a High School Musical phase despite its debut coming when I was past the target audience), I was enthralled with the idea that one of the most iconic fairy tales was being made into a contemporary piece based on the YA novel by Alex Flinn.

RELATED | Romantic Moment of the Week: The DUFF’s Wesley and Bianca

The story is primarily the same though the setting shifts from a castle to high school. There’s still a beastly young hero who’s arrogant, brash and entitled, and a young heroine who melts his cynical heart. In this scenario, our beast is Kyle Kingston, a high-school senior who rules his school as his own personal kingdom; he believes the social higher archy revolves around him. The “beauty” is Lindy, a studious girl who has a crush on popular Kyle, but with a smart head on her shoulders, she doesn’t let herself fall under his spell.

Part of what I like about this version is that these two characters have an opportunity to know each other before they become the familiar iconic characters locked in a kind of prison. Also sweet is how the script allows Kyle a moment of vulnerability with Lindy prior to his transformation of being forced to wear his ugly soul outside. This happens at a school dance when by happenstance they share a conversation and have their photo snapped for the school paper. The look of tenderness and gentle touch Kyle affects is telling and precious.

Discovering Lindy (who likes sappy “long-hand love letters”) has a bad home life, following his prison and exile to the country home his father buys, Kyle arranges to bring Lindy there under his protection. It’s here that he becomes Hunter, the roommate who keeps himself hidden from Lindy but attempts to quietly woo her with gifts and sweet gestures (like beginning a love letter and construction of a greenhouse). In time, he does reveal himself, inspiring trust and friendship to take shape between the two as he reveals his scars (physical and emotional) to Lindy. With the passage of time, he asks her on a spontaneous outing where he reveals his heart. 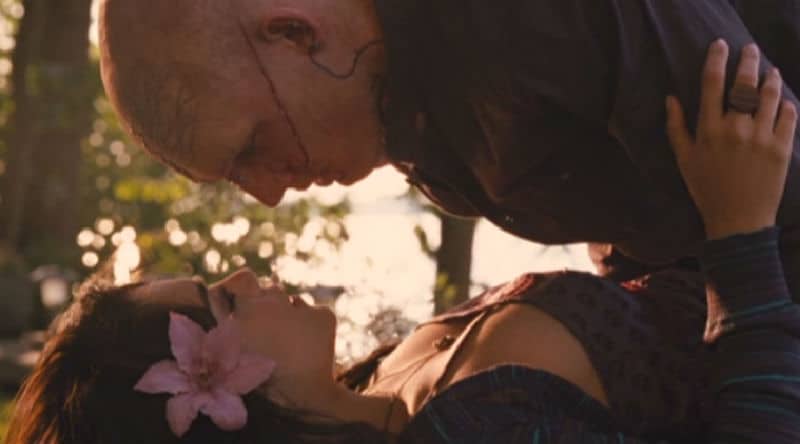 This leads us into today’s romantic moment. Some romantic moments aren’t about the grand gestures. Some are found in the quieter, almost obscure moments. This is one such moment. Though Beastly is a film all about teenage angst, it’s also full of deeper meanings and looking under the surface. You’ll also find transparent references to the legend it’s inspired by. Today’s feature isn’t necessarily romantic in its scripting, but rather in the gestures and quietly sweet romanticism of what it reveals about the two characters. 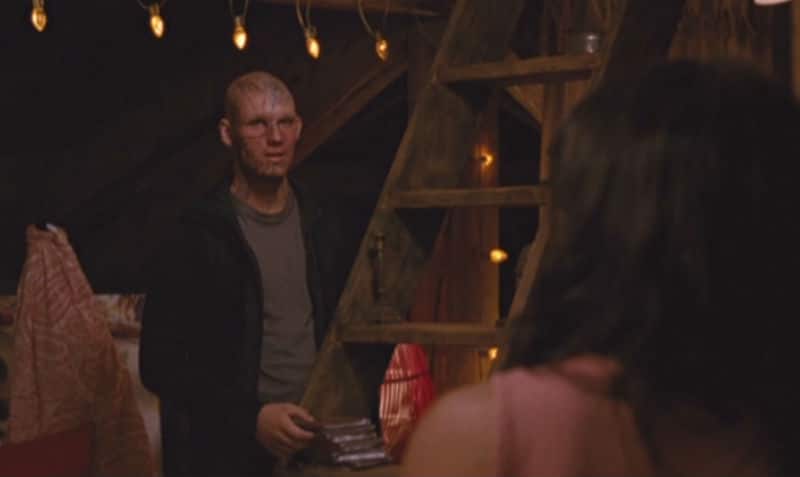 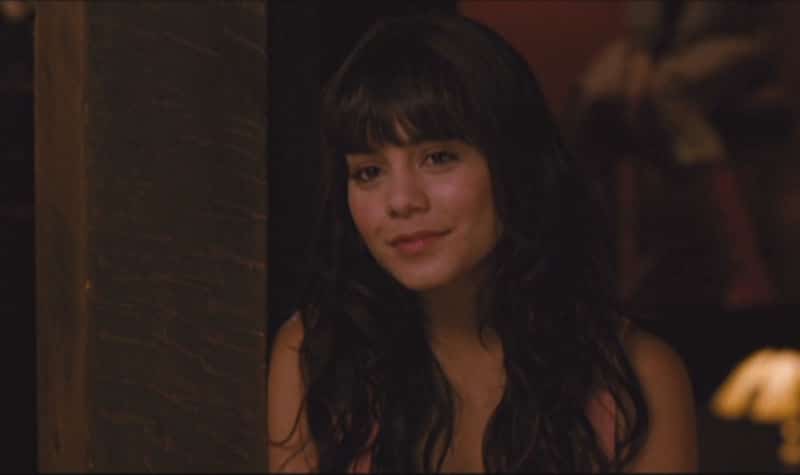 As their friendship blossoms, Hunter visits Lindy in her room, a handful of CD’s in his hand. As they engage in casual conversation, he asks her whether she misses her friends and school. Following an adjustment period, Lindy has come to find a kind of home with Hunter. It’s with him she’s found some peace and learned more than she imagined. As they two converse about life, in the course of their conversation, she admits to the fact that she might have fallen for Kyle (who Lindy doesn’t realize she is living with and confessing this to). She tells him that underneath Kyle’s arrogance, there was something good. She saw more to him. 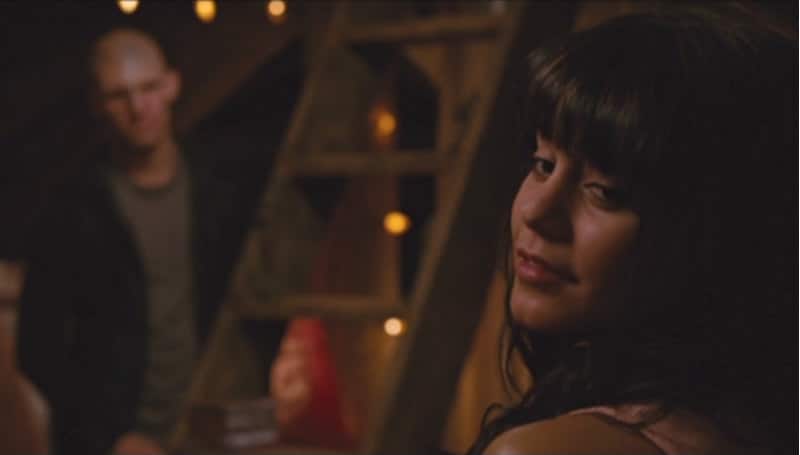 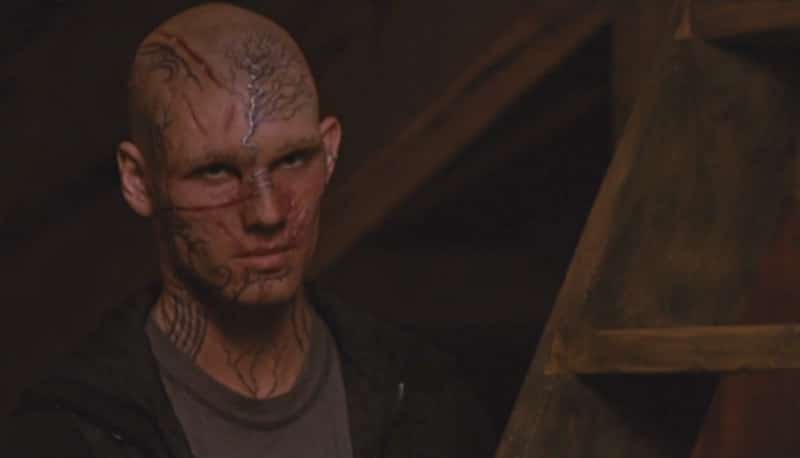 Feeling uncomfortable, Hunter then asks her if she’d like to go somewhere with him. With a small smile, she nods yes prompting them to set out walking in the darkened streets of the city. 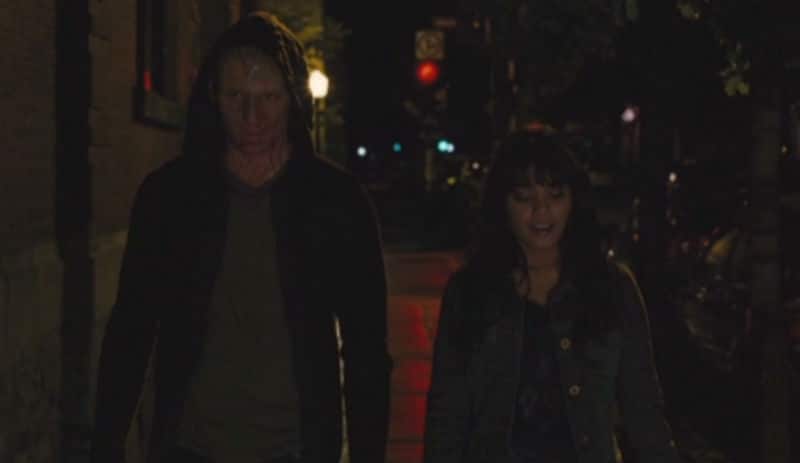 As they walk, Lindy tells of her fears walking late at night looking for her addict father. Making a lighthearted joke, Hunter reminds her there’s a scary guy walking right next to her. She asks if people are frightened when they see him. He tells her people don’t see him. Relating to him, Lindy confesses, “I was good at blending in too.” 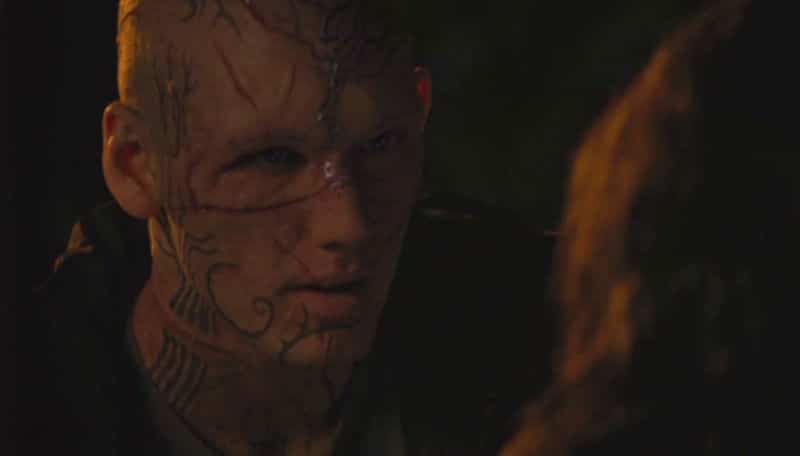 Eventually, they arrive at their destination. Confused by what seems a random spontaneity, Lindy sees where Hunter is taking her. It’s the zoo. 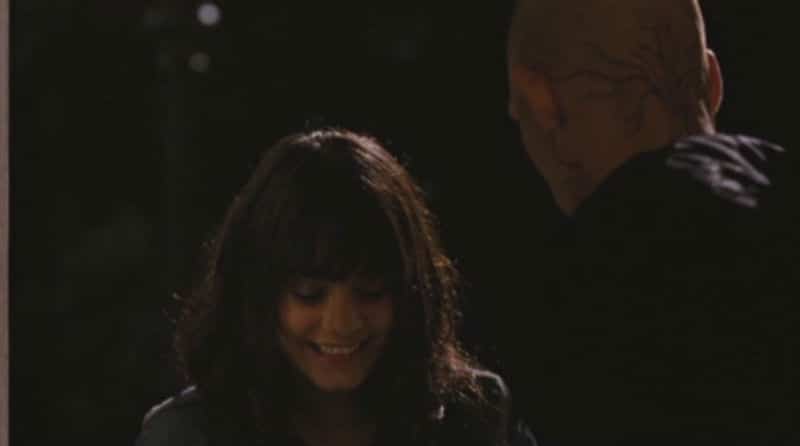 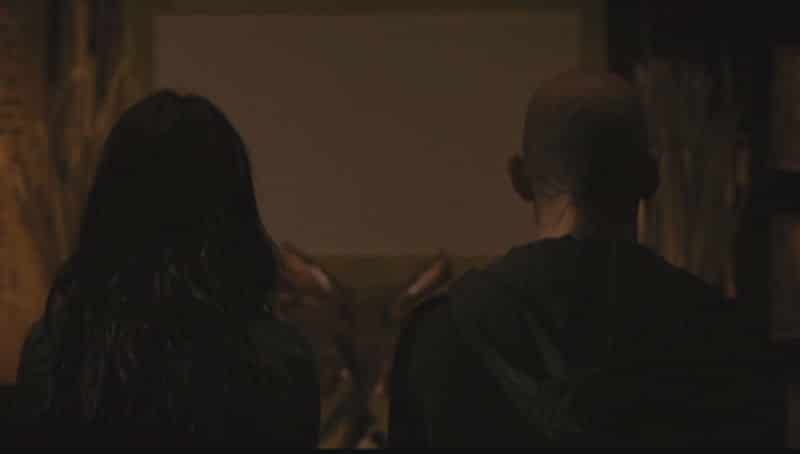 The pair breaks into the building where Hunter leads her to a bench; an educational video about a mother elephant is playing. He tells her a secret about his past. 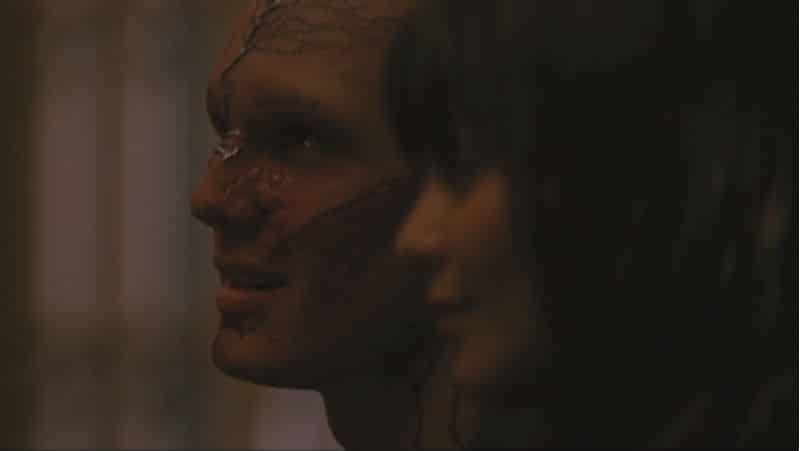 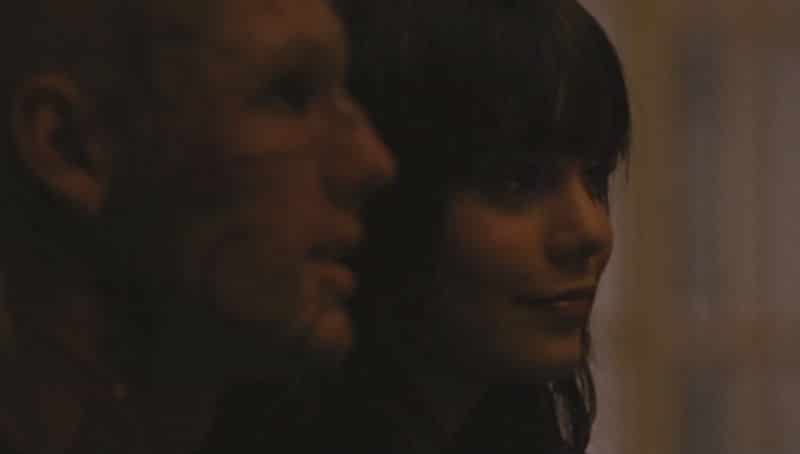 The zoo was the place his father brought him right before his father took him when his mother left. He recounts to Lindy that his father bought him all the toys and candy he wanted that day before telling him his mother had left. When he learned this, he ran away and watched this video. 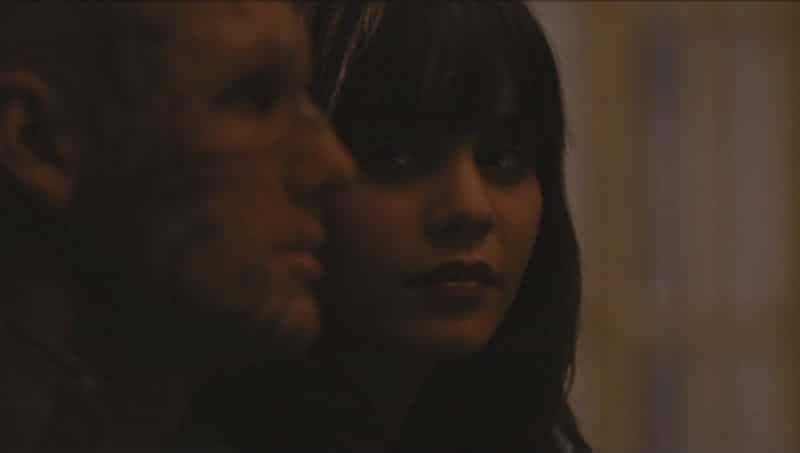 Turning, Lindy stays silent listening with a look of tender understanding and affection.

The video, as Hunter recounts it is about a mother who lost her two babies and a year later, as she migrated back, she discovered their bones. 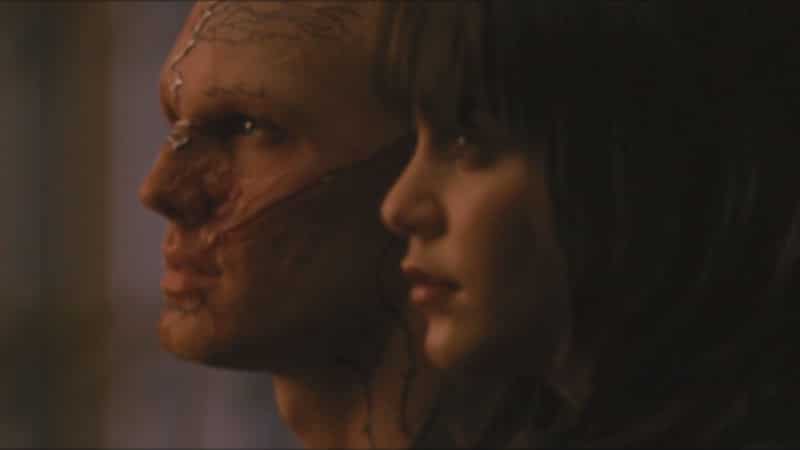 Hunter asks, “Can you imagine a love like that?” 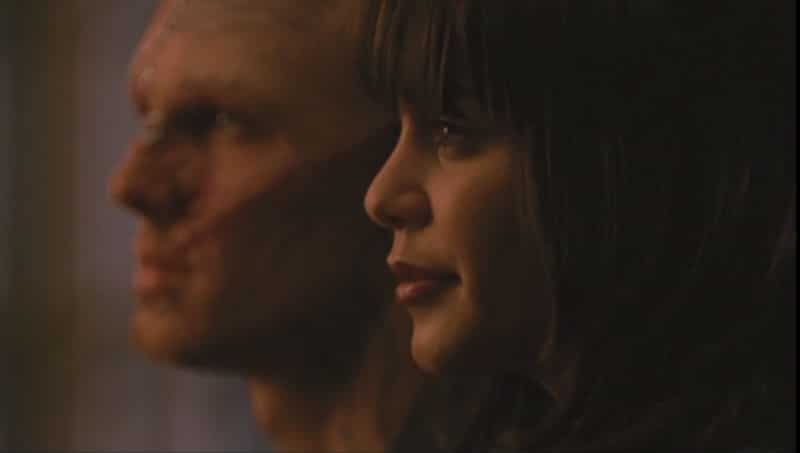 Softly, Lindy whispers her reply, “No.” 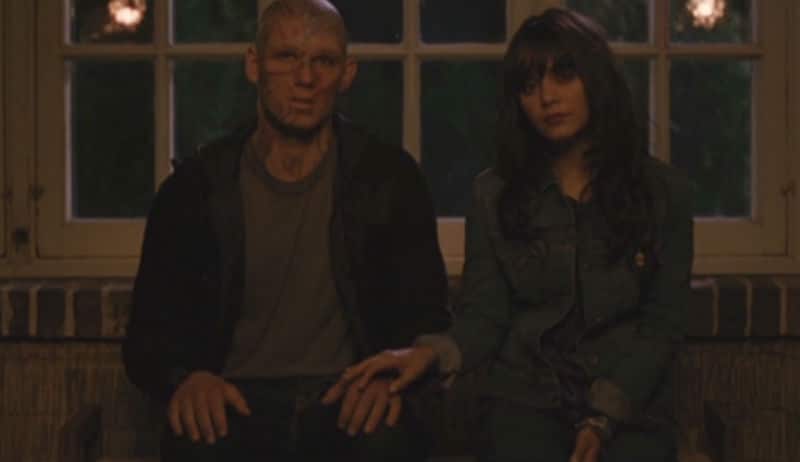 As they sit there silently, Hunter tells her he’s never told anyone that before. Transfixed with what he’s just confessed and understanding the enormity of this emotional scar, and need for quiet, without words, Lindy reaches over and places her hand on top of Hunter’s.

Later, back at home as the sun slowly begins to rise, they sit on the roof, watching the sun come up. 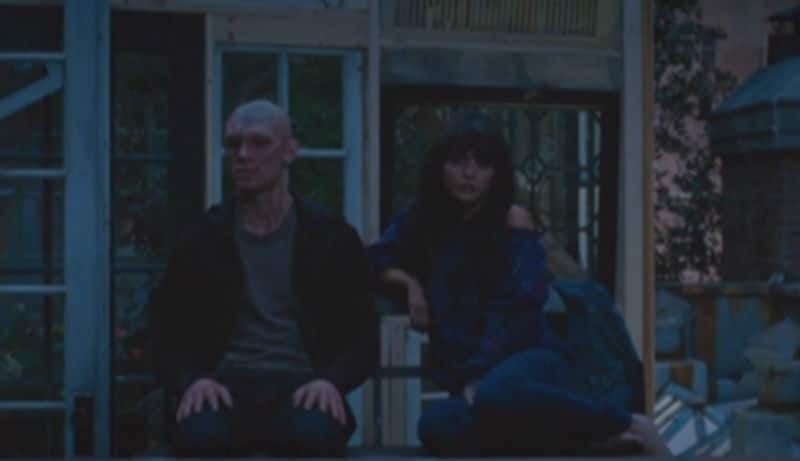 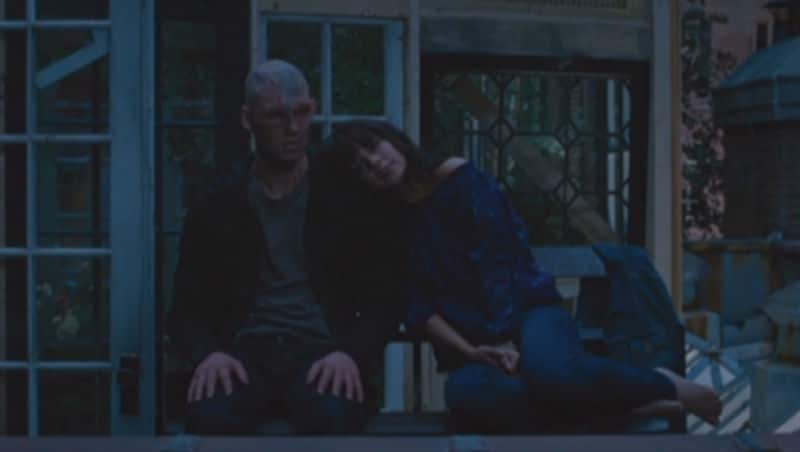 As they sit side-by-side, Lindy remarks on the sun coming up soon. For perhaps the first time, and without even realizing it, Lindy places her trust completely in the boy next to her. Leaning into Hunter, she rests her head on his shoulder. 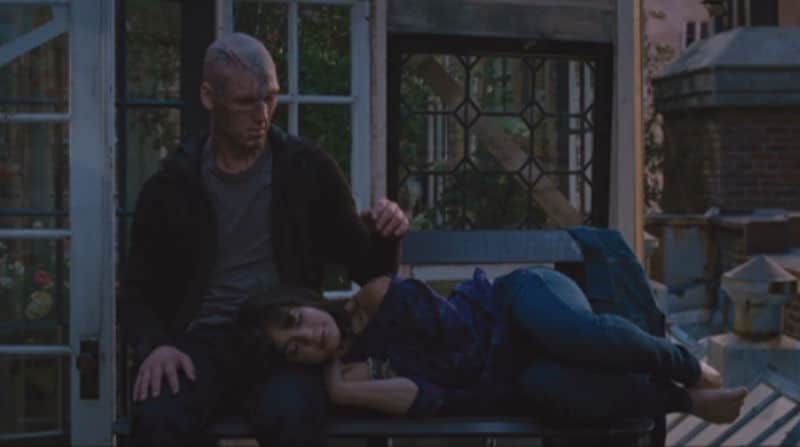 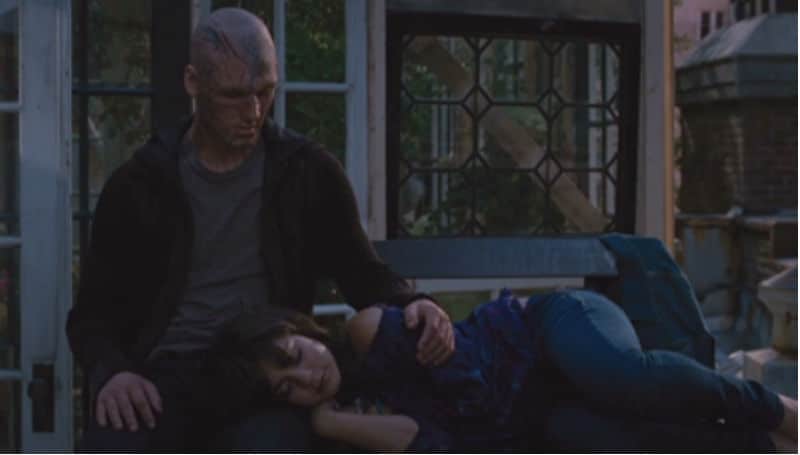 Moving again, she lays her head on his lap closing her eyes. As Hunter gazes down at her, he gently brushes aside her hair and speaks, perhaps his first, genuine words of love. “I think,” he begins, afraid even to say the words aloud to a sleeping Lindy. “I think I love you.” 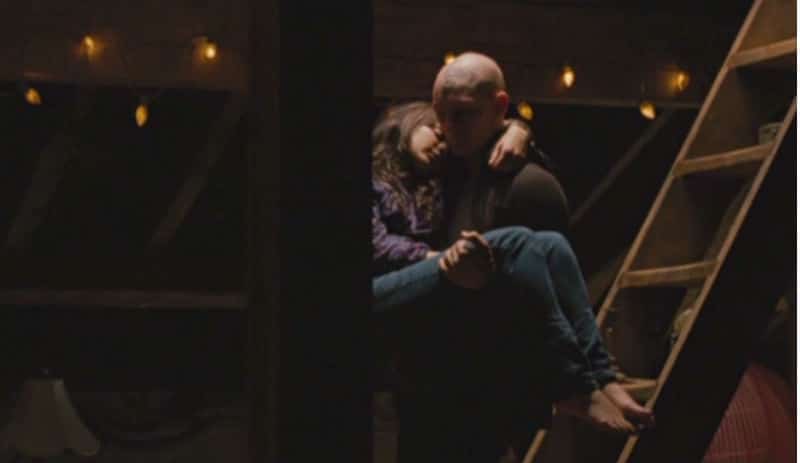 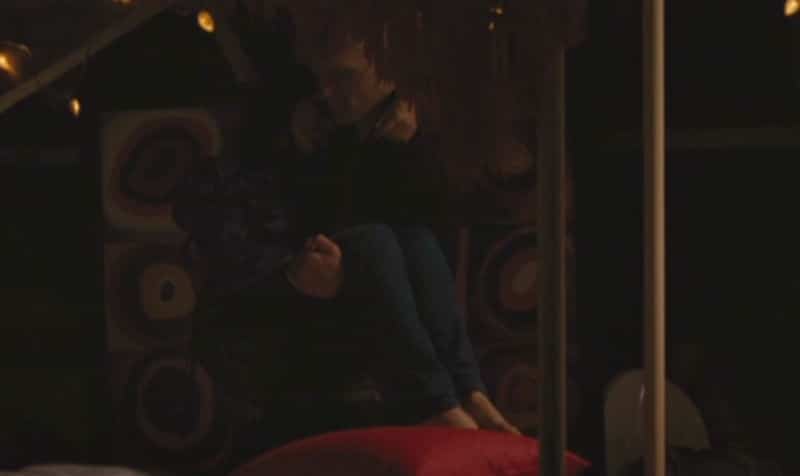 Gently, Hunter carries her back to her room and ever so tenderly lays her on her bed. Quietly he tucks her in, and keeping vigil beside her bedside, he watches her sleep.

Though this image of tranquility and quiet romance frames a pretty happily-ever-after picture, it’s far from the end of what happens as the story works towards the conclusion of this couple’s love story…

Have you seen Beastly? Did you like it as a contemporary re-telling of an iconic story or this as a romantic moment for this story? For me, it’s a revealing moment between these characters because, for the first time, it allows Kyle to be honest and real with someone, all the while shattering his wall of cynicism. For Lindy, it shows her as less of a protective shell and opening her heart to trusting someone other than herself. What do you think about the writer’s unique interpretation of the iconic fairytale? Sound off with your thoughts below!

Our romance-themed entertainment site is on a mission to help you find the best period dramas, romance movies, TV shows, and books. Other topics include Jane Austen, Classic Hollywood, TV Couples, Fairy Tales, Romantic Living, Romanticism, and more. We’re damsels not in distress fighting for the all-new optimistic Romantic Revolution. Join us and subscribe. For more information, see our About, Old-Fashioned Romance 101, Modern Romanticism 101, and Romantic Living 101.
Pin this article to read later! And make sure to follow us on Pinterest.
By Rissi JC on March 19th, 2016