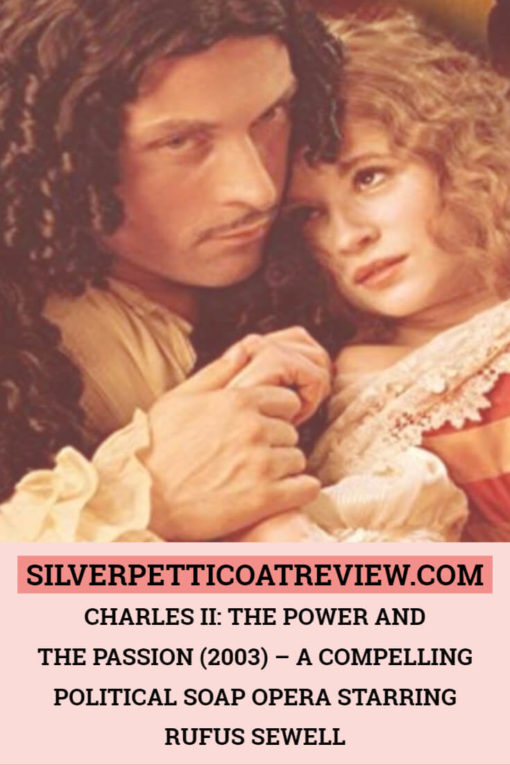 Charles II: The Power and the Passion is a fascinating historical drama.

England’s King Charles II occupied the throne during a fascinating time in the nation’s history. During the English Civil War and Oliver Cromwell’s rule, his father was beheaded, and Charles was exiled.

After Cromwell’s death, Charles II returned to England as its’ king. Charles II reversed many of the rules implemented by Cromwell’s government. He also continued his father’s battle with the English Parliament. The years of his reign are known as The Restoration. Charles II: The Power and the Passion presents a portrait of this multi-faceted historical figure.

Charles II: The Power and the Passion is an apt title for this mini-series which splits its focus between Charles’ personal affairs and political battles.

The first half of the series threatens to become mired down with a soap opera style approach to Charles’ relationships with his many mistresses. Barbara Villiers is the most important and depraved of these, a woman trying to leverage her influence of the king into political power. Helen McCrory gives a deliciously wicked and clever performance of Barbara.

But I quickly grew tired of watching the king’s many sexual escapades.

Fortunately, the series eventually allows the king’s political battles to take center stage. The politics make for a much more compelling and fascinating dramatic narrative.

THE KING VERSUS PARLIAMENT

Throughout his monarchy, Charles remains locked in an intense battle with Parliament. The fight is over who holds the reins of power over England; the king or the government.

There is also the important subject of religious tolerance. England is very wary if not downright prejudiced against seeing a Catholic king on the throne.

With no legitimate son to succeed him, Charles’s successor is his unpopular Catholic brother James. Parliament wishes Charles to take a stand against the Catholic religion, but Charles believes strongly in religious tolerance. This leads some in the government to plot against Charles to put his oldest, illegitimate son on the throne.

Of course, like most films about monarchs and power, there are secret plots and betrayal, strange alliances, unsuspected enemies and the everlasting struggle of who will be victorious.

The series also includes some historical events of Charles II reign like a war with his former Dutch allies, the Great Plague and the Great Fire of London.

It also delves into the secret agreement with the French king regarding Charles’ conversion to the Catholic church. And it all culminates in a rather stunning scene in the halls of Parliament which literally made me gasp in surprise.

Charles II: The Power and the Passion boasts an excellent cast.  I’ve already mentioned Helen McCrory, but there’s also Martin Freeman as Charles’ parliamentary nemesis Lord Shaftesbury. Shirley Henderson is a happy surprise as Charles’ wronged but loyal and infertile wife. Then there’s Rupert Graves as Charles’ closest friend the George, Duke of Buckingham whose loyalty is called in to question.

But this series belongs entirely to Rufus Sewell as the titular King Charles. He portrays a man of many strengths and weaknesses whose personal character is sometimes suspect. It is precisely this humanity that compels viewers to empathize with him even when his morality and treatment of others is questionable.

It just may be the best performance I’ve seen from Sewell. His king may be a scoundrel, but no one can doubt his sincerity of purpose.

Though the series does take some license in the historical facts surrounding Charles II’s reign, it doesn’t stray too far from the truth. Not only is Charles himself a fascinating personality, but so is this unique time in England’s history.

Sandwiched between England’s Civil War and The Glorious Revolution, the years Charles ruled England are full of moral conflicts and critical debates about the power of government and religion. I also enjoyed “meeting” all the characters of political and personal influence surrounding Charles, who help shape his decisions.

Charles II: The Power and the Passion is a fascinating look at a complex historical figure and the times in which he lives. You will find a story that can’t help but snag your attention if you can look past the excessive amounts of bedroom scenes in the first half of the series. The battle over power is not a new one and continues to this day.

This series shows how it molds the actions of those attempting to hold it. The interesting thing is that it also portrays these people as human as the rest of us. Men and women full of potential but also flaws that threaten the purity of the values they profess to be fighting for. And that is what makes Charles II: The Power and the Passion a historical drama worth watching.

Where to Watch: Stream on Prime and Britbox. Buy from Amazon, iTunes, Google Play, and VUDU.

Content Note: Rated TV-14 and TV-MA (depending on the source) for language, violence, and sexuality. There is brief female frontal nudity as well as multiple bedroom scenes along with frankly sexual conversations. There are scenes of plague and fire deaths and also beheadings.