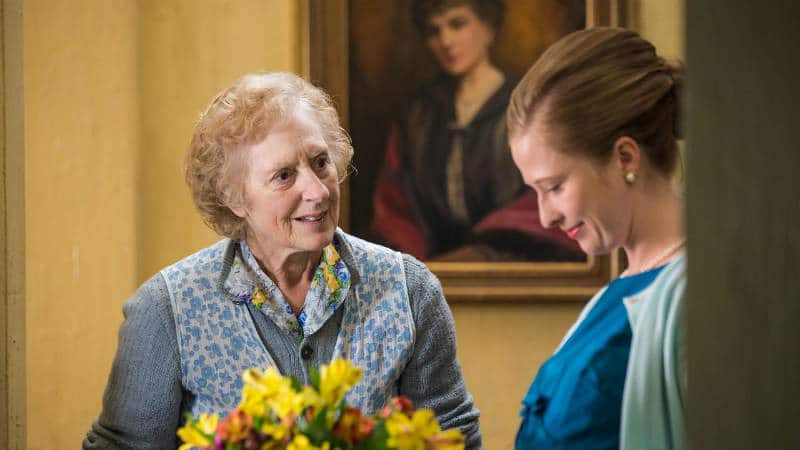 The balance of poignant stories and levity was in tip-top form in last night’s Call the Midwife. Everything blended together effortlessly, and while there is sorrow in the “getting there,” the episode ultimately ended upbeat with much hope, and most importantly, without tragedy. 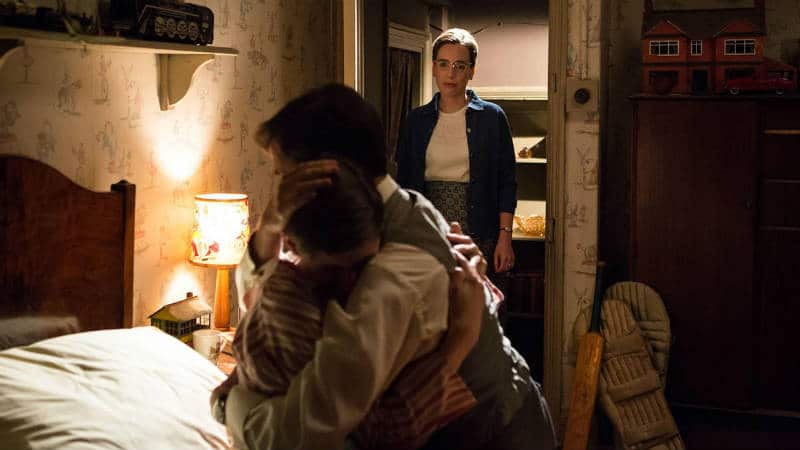 Dr. Turner’s latest patient involves a cancer-stricken man who has given up on all treatment because he holds to the belief it would do more harm than good to his family. The man believes it’d tear him apart and rob him of the final months he has left. Holding lung disease clinics, Dr. Turner searches for what might be causing all of Poplar’s lung ailments.

At the hospital, he learns the likely culprit is cigarettes. This inspires him to rethink his own smoking habits. Adding some lighthearted fun to this storyline, we watch as a series of events unfold leading Dr. Turner to quit smoking. His son, Timothy does his part with his own version of reverse psychology to ensure his father will give up the bad habit for good. Dr. Turner is committed to quitting despite the side effects while his wife, Shelagh isn’t sold on the idea. After all, she smokes so little she argues. But Patrick will not be swayed. They quit together! Only trouble is, Shelagh finds herself fidgety and eating far too many biscuits than is good for her waistline.

Delia Acts as Midwife and Nurse Crane Rides a Bike

Meanwhile, Nurse Phyllis Crane’s expectant mother, Roseanne Dawley is nearing her delivery date when unexpectedly she goes into labor early. Alone in her house, she phones Nonnatus House frantic for a midwife. Phyllis leaves immediately thereafter but there’s a snag, her motor won’t run. This forces her to cycle to her patient’s house which delays her considerably. 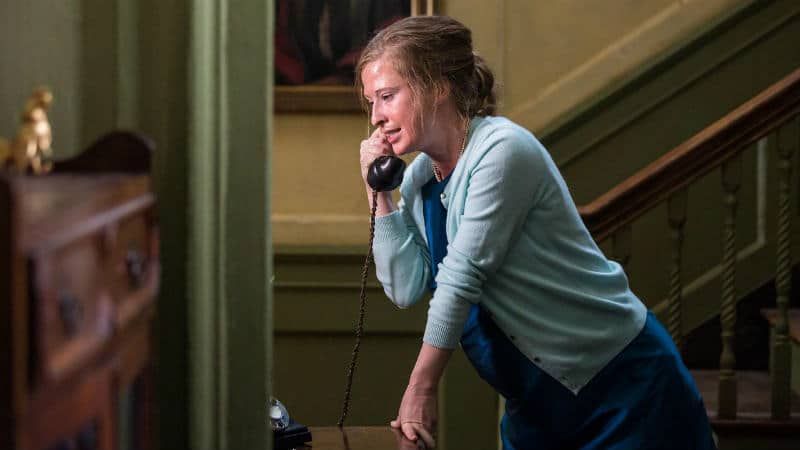 Alone at Nonnatus, Delia is left behind to answer the phones. But when Roseanne phones shortly after Phyllis’ leaves, in a panic, Delia is left to talk her through a self-delivery. The nervous event seems to scar Roseanne who wants nothing to do with her new daughter. Her husband, an older and wise man clearly smitten with Roseanne is left holding their small daughter when Roseanne disappears.

Determined to patch up the situation, Phyllis sets about tracking her down only to discover she has a checkered past. You see, Roseanne’s greatest fear is that her daughter will end up like her. With coaxing, Phyllis helps her see reason and happily reunites a family.

The comical story arc of episode five involves Fred and his wife, Violet. Trixie’s Keep Fit class (complete with a return of those scandalous black leotards!) returns and with it, Violet enrolls in the class. Unfortunately for her, her plan to get fit (and pull Fred into some of the exercises) backfires. During one of her at-home-workouts, Violet strains her back. Dr. Turner orders bed rest meaning Violet is banned from working in her shop. This inspires Fred to become a shopkeeper while his wife is indisposed. 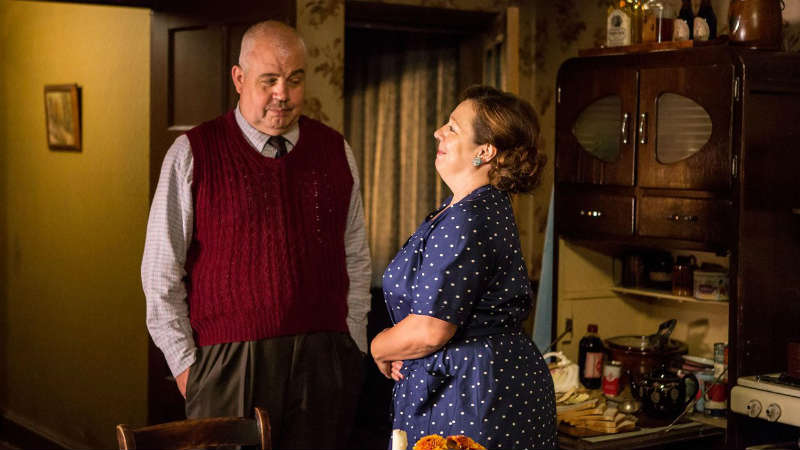 Naturally, as Fred sets about being the best substitute he can, he finds himself dealing in territory not meant for someone of his skillset. He recruits Barbara for assistance, and later, manages to disrupt Violet’s weekly stock delivery. When Violet recovers enough to return to her normal duties, she has but one request of the husband she dearly loves. He’s never to set foot in her shop again.

As is the style of Call the Midwife, every story focuses on the patients whose lives are in tatters and the women of Nonnatus House who help piece them back together. I was particularly touched by Phyllis’ story this week because she’s so often a character who fades into the woodwork. Reliable, certainly, but often not given a larger role in the story. This week she was, and she found beauty in a woman’s life who felt unworthy and ashamed. That payoff is priceless.

Naturally, there are still weighty topics in episode five, but the story with newlyweds (and how sweet they are together!), Violet and Fred help leverage this script towards being something with more heart and because of this, there were a few less tears.

As we barrel towards the final three episodes of the season, next week’s looks like it will hold some happiness (more Tom and Barbara, perhaps!), but also some dreadful abuse. Needless to say, if the tissues were in shorter supply this Sunday, they’re sure to be needed next. 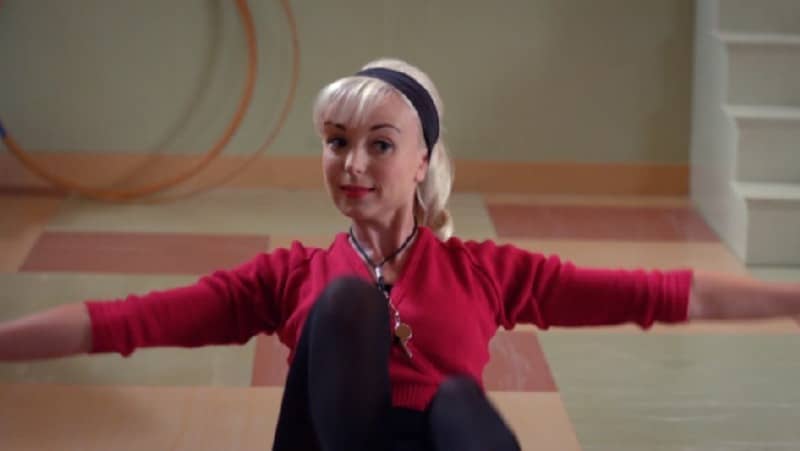 What plot threads would you like to see revisited as we wrap up this season? I find that one of my favorite continuing journeys is Trixie’s. One of the reasons for this being is that she’s so much more than what her introduction (a ditzy blonde) might have suggested. I love seeing her healthy, and hopefully, in time, happy too. I think right now she is still struggling (inside) with accepting that she and Tom are (very likely) over.

Have any thoughts on last night’s episode? Feel free to comment down below! I’d love to read your impressions of this season or episode five.

Our romance-themed entertainment site is on a mission to help you find the best period dramas, romance movies, TV shows, and books. Other topics include Jane Austen, Classic Hollywood, TV Couples, Fairy Tales, Romantic Living, Romanticism, and more. We’re damsels not in distress fighting for the all-new optimistic Romantic Revolution. Join us and subscribe. For more information, see our About, Old-Fashioned Romance 101, Modern Romanticism 101, and Romantic Living 101.
Pin this article to read later! And make sure to follow us on Pinterest.
By Rissi JC on May 2nd, 2016