If you’ve never been initiated into the world of Indian cinema – Bollywood that is – then you’ve definitely been missing out. I’ve always loved the colour, over the top theatrics, song and dance that is synonymous with the world’s largest producer of films. A Bollywood film is generally an experience to be savoured and enjoyed. I went through an intense Bollywood phase during the early 2000’s. While the phase has long passed, I do occasionally return to savour a special morsel from the Bollywood menu.

With Bride and Prejudice, British filmmaker Gurinder Chadha combines the vibrancy, colour and dance of a Bollywood extravaganza with modern-day Jane Austen. The film isn’t strictly a Bollywood film though. It’s more BritLit meets Hollywood with a huge sprinkling of Bollywood tropes. Honestly, though, it’s pretty much as good as it gets because I saw Bride and Prejudice in the cinema thrice during its theatrical run. It’s corn syrup drizzled over a marshmallow. In other words, it’s delicious!

Tagline: As Gloria Estefan says, “The rhythm is going to get you. “

A Marriage Has Come To Town Bride and Prejudice is Jane Austen’s Pride and Prejudice, but set within an alternate culture, spanning three countries – India, the United Kingdom, and the United States. The route markers are the same, however. Lalita Bakshi (the insanely gorgeous Aishwarya Rai) is the Elizabeth Bennet of this story. She is strong, feisty, a good daughter and a kind friend. At an engagement party, Lalita and her sister Jaya (Namrata Shirodkar) – aka Jane Bennet – are introduced to the Darcy and Bingley characters. In Bride and Prejudice, Bingley is no shy awkward wallflower though. Balraj (Naveen Andrews) is British but returns to India as the groom’s best man. Accompanying him is his American BF Will Darcy (Martin Henderson) and his sister Kiran (Indira Varma).

As per Austen’s roadmap, Balraj and Darcy are eligible men and the mothers at the party do their best to try and promote interest in their daughters. Just as the first musical number begins, Balraj and Jaya’s eyes meet and it’s love at first sight. Darcy and Lalita also lock eyes, and while there is chemistry, there is also curiosity.

These girls are like naked live wires. If you get too close, you’ll get an electric shock of love. 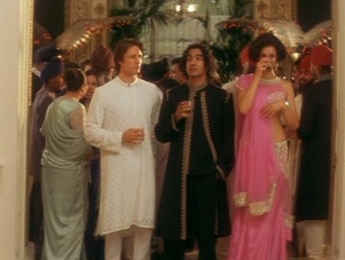 As Baljraj morphs into “the Indian version of MC Hammer”, Darcy watches Lalita charm her way through the dance routine. Unfortunately, their actual meeting – and subsequent… clashes – doesn’t go well. Lalita thinks he’s a snobbish, rich American who believes himself to be above small-town affairs. Darcy, in turn, finds Lalita’s quick judgment frustrating. While he clearly is uncomfortable in unfamiliar surroundings, he’s only trying to find his feet and means no offence. Cut the man some slack Lalita! 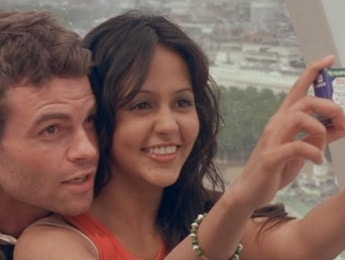 Before long, however, Johnny Wickham (Daniel Gillies) arrives on the scene and turns his pseudo-charm upon Lalita, then her younger sister Lakhi (Peeya Rai Chowdhary). Darcy is vexed (naturally) as Lalita and Wickham draw closer. While she smiles at Wickham like he’s the sun, all Darcy manages to coax from her is a glower of ire. Unexpectedly, Balraj returns to England, crushing Jaya’s heart. However, the little town of Amritsar isn’t quiet for long. Mr. Kohli (Nitin Ganatra) arrives to find himself a bride among the Bakshi girls. Lalitha is disgusted, Jaya is “spoken for” and so eventually, as you might have guessed, Mr. Kohli finds his bride amongst Lalitha’s friends.

When the Bakshi women travel to America for Kohli’s wedding, Lalitha and Darcy meet again. Placing their former bickering aside, there’s courting and magical musical numbers where Martin Henderson and Aishwarya Rai twirl around in fountains and embrace on mountain tops. Until that is, a complication arrives to throw a spanner in the works. But thanks to Wickham and his nefarious intentions, eventually, it’s Darcy to the rescue!

If you haven’t seen a Bollywood musical, then you might not have come across Aishwarya Rai. A former Miss World (1994), she has been hailed as the world’s most beautiful women for more than two decades. While beauty is subjective, I have to say, I cannot argue with the mantle bestowed upon her. For the role, Rai gained weight to make Lalitha more relatable and it shows. She is incredibly charming and very much at home with the song and dance routine. The camera also loves her. Despite her beauty, she is accessible, charming and a pleasure to watch.

Henderson however, while Grade A eye candy, is a little out of his depth as Darcy. His disquiet plays into the characterisation of Fitzwilliam Darcy, but he never quite owns the role or his place in the story. He remains unsure and somewhat tentative, making him less of an even match for Lalitha’s strong, assertive personality. Rai and Henderson do have chemistry though and work well aesthetically, if not necessarily as well-matched actors. In his defense, however, Darcy is a complex character under normal circumstances. Place him in a musical with song, dance and more comedy than usual, and it’s easy to understand why finding the core of the character is hard.

I know enough to know that if that damn cute Darcy was looking at me the way he is looking at you now, I wouldn’t ignore him. 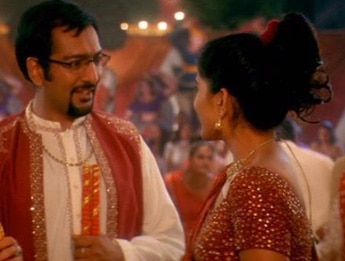 For their parts, Naveen Andrews and Namrata Shirodkar are actually more natural as Balraj and Jaya. The love-struck pair does share less screen time, however, which perhaps works in their favour. Nitin Ganatra as Mr. Kohli is equal parts ridiculous and endearing and the combination – at least for me – works spectacularly. Mr. Kohli is hilarious and I still find myself laughing out loud at every scene he’s in. He also has the best lines in the film! Whereas I always found Mr. Collins to be a bit of a creeper, Kohli is less creeper, more clueless energizer bunny.

I may be healthy, wealthy and wise, but as they say, no life… without wife. 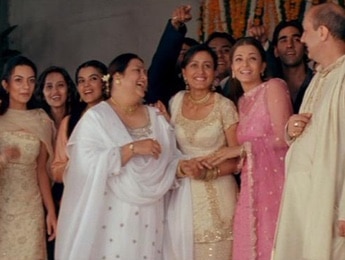 No matter the cultural framework, Nadira Babbaras – as Mrs. Bennet – is always a hoot. Together with Mr. Kohli, they tag-team well and completely steal the show. Anupam Kher is one of my favourite Indian actors and I am always happy to see him in any role. A Gurinder Chadha alum, here, just like in Bend it like Beckham and Sense8, Kher plays a loving father to a headstrong daughter.

Keep an eye out for Daniel Gillies and Alexis Bledel in small roles as Mr. Wickham and Georgiana Darcy respectively. 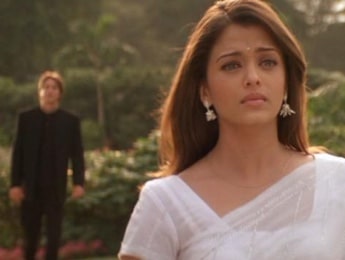 Generally speaking, the Bride and Prejudice story works. The Bollywood setting to an Austen classic also works. A huge part of me hopes that more works by Austen will receive a similar treatment because it’s loads of fun. A pity, however, that while the dance works, the songs are at their best when they are not constrained by English lyrics. Perhaps it’s because I’m used to Hindi when I watch Bollywood films, but while I loved the rhythm of the music, the lyrics are silly and benign. The Darcy/Lalita love song, “Take Me to Love” is perhaps the guiltiest, while “No Life Without Wife”, while also silly, is just a goofy grin fest. Despite the aforementioned, all the songs will stay stuck in your head long after the film had ended. So in that case, it’s probably achieved its goal. Bride and Prejudice, when stacked up with its period drama kin, is nowhere near as serious. In fact, it’s a full-on comedy with dramatic elements that resemble the plot of Pride and Prejudice. It’s a faithful adaptation yes, but it’s not as complex as the text, or many of the beloved films and miniseries that have come before this musical.

Make no mistake, however, Bride and Prejudice is a treat that any Austen loving fan should see at least once. If only to discover Aishwarya Rai, it would be well worth the time spent. In addition, there’s also a HILARIOUS snake dance performed by Maya (Meghna Kothari), Bride and Prejudice’s Mary Bennet. I always laugh until the tears roll down my face.

With Bride and Prejudice, Gurinder Chadha created a film with so much colour, life, and vibrancy that it’s a wonderful feast for the eyes. The Indian costumes, sumptuous fabrics for saris and the accompanying jewelry are exquisite. I also enjoyed seeing Martin Henderson in traditional Indian Kurta. As any Darcy should, he looked dashing!

Where to Watch: Bride and Prejudice is available for sale or streaming on Amazon

Content Note: Bride and Prejudice is rated PG-13 for some sexual references.

Have you watched Bride and Prejudice? What did you think? Comment below and let me know!

Our romance-themed entertainment site is on a mission to help you find the best period dramas, romance movies, TV shows, and books. Other topics include Jane Austen, Classic Hollywood, TV Couples, Fairy Tales, Romantic Living, Romanticism, and more. We’re damsels not in distress fighting for the all-new optimistic Romantic Revolution. Join us and subscribe. For more information, see our About, Old-Fashioned Romance 101, Modern Romanticism 101, and Romantic Living 101.
Pin this article to read later! And make sure to follow us on Pinterest.
By Naazneen Samsodien on October 3rd, 2017