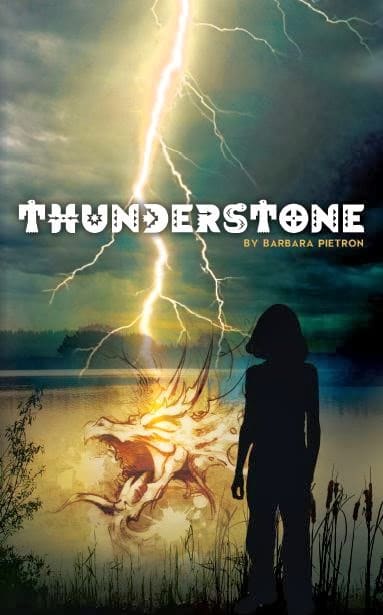 Sneaking out at night, driving without a license, and falling for a guy weren’t things fifteen-year-old Jeni expected to do while visiting Lake Itasca, Minnesota.  Then she meets Ice, the local medicine man’s apprentice.  Suddenly, her simple family gathering becomes an exciting – and terrifying – week of self-discovery.  At first Jeni doesn’t believe Ice’s claim that she can touch the spirit world and has somehow released a mythical underwater monster. However, she’s forced to reconsider when a teen swears a monster killed his father while fishing on the lake. Just as she comes to accept truth, Jeni finds she is the only one who can imprison the monster, making her the creature’s next target.  She’ll need immense faith in her newfound ability to put herself in harm’s way and face down the monster.  And even if she succeeds in delivering the local population – and Ice – from the creature’s wrath, there is no guarantee Jeni will escape with her own life.

After years in the
corporate world, Barbara found herself with a second chance to decide what she
wanted to be when she grew up.  Her
lifetime love of books and the written word returned one answer: writer.  Drawing from her experience with technical
writing, she began by writing non-fiction magazine pieces and achieved both
regional and national publication.  Her
success encouraged her to complete a novel.
She learned much from her first manuscript, critiques, books, contests,
and blogs.  In 2012, her novel Thunderstone, was a quarterfinalist in
the Amazon Breakthrough Novel Award contest and won a critique by Publisher’s
Weekly.  A few months later, she was
offered publication by Scribe Publishing Company.

Barbara has a few other
novels in the works, including a Thunderstone
sequel. If she’s not reading or writing, Barbara likes to walk, garden, and
sew.  She works in a library and lives in
Royal Oak, Michigan with her husband, daughter, and their cat – who often acts
like a dog.

With a dashing love story, an evil mythical monster, and a quest to save the world, how could one not love Barbara Pietron’s Thunderstone? When Jeni, the heroine, is on a family trip to spread her grandfather’s ashes at the mouth of the Mississippi river, she meets Ice (a medicine man in training) after she buys a mysterious stone cat at a local convenience store. This stone cat turns out to be connected to an ancient Native American monster that Jeni accidentally awakens when she falls into a river with the stone in her pocket. What ensues is an entertaining adventure to save the world from this monster’s evil machinations and trap him once more so that he can never harm and kill people ever again. Along the way, Ice and Jeni slowly fall in love, and Ice helps Jeni come to terms with her newfound shamanic powers.

From beginning to end, the dynamic between the two leading characters is very natural. The author doesn’t force their connection with each other, but rather lets it form gradually. They aren’t suddenly in love as characters are often made to be in so many novels these days. The build-up between them is subtle and speaks to a connection of the soul. We don’t have a situation where the girl meets the boy and in the next chapter they are together as a couple, leaving all the wonderful tension of their romantic build-up gone and done with. Throughout the story, Barbara Pietron does a fantastic job of maintaining the tension so that their relationship never becomes boring, sucking you into her world fully.

The author also does an excellent job of researching her subject. She has clearly done much work on studying the Native American myths and legends. Her quotes at the beginning of each chapter are proof enough, but her treatment of the monster and its resurfacing also points to her knowledge of the Native American myth story arc. Her treatment of the culture is just as knowledgeable. She knows the workings of a medicine man within the society and the way a Native American society communicates and runs in the modern world. The immersion into this culture even suggests Pietron may have spent some time living among and studying the cultural aspects of a tribe in today’s society. Her familiarity of the day to day running of a tribe shines through amidst the supernatural elements of the tale. One gets the feeling that the lives being portrayed are real, and not just shallowly brought into existence for one moment of the story. One can feel the history behind each character.

Even though I found the main hero’s name to be surprising and maybe even silly at first, Pietron provided such a sensible explanation, that he came to life as a real person, and not some silly character with a bizarre name. When I first read the name Ice, I was somewhat turned off, thinking that the author was just trying to pick out a name that she thought sounded cool and unusual. However, after her explanation of his being Native American and what his full name was, as well as her creation of the lifelike Native America culture and backdrop of the story, I didn’t find the name odd or bizarre. It entwined naturally with the magical story she was weaving and by the end I even came to love his name and the character too.

Pietron also weaves in the new powers of Jeni in a very subtle and seamless way. Jeni doesn’t just suddenly gain these new powers and know how to use them. She builds that part of the story gradually as well, and makes it fit realistically within the tale she is telling. This may seem simple and obvious to some but so many stories lately have brought in elements like this in a very blatant and awkward manner that I think her treatment of it should be recognized. She introduces supernatural elements slowly; bringing them in around the more mundane aspects and making them seem much more realistic. I enjoyed her subtle treatment of the supernatural; that she didn’t just shove it in the reader’s face without any back-story.  I can’t count how many teen novels do that nowadays and how regular it is becoming. This tale was a breath of fresh air to read.

The only thing that really personally bothered me was at the very beginning of the novel. The author used the word Indian for Native American. Now, she only did this at the very beginning and stopped using the term quickly, so I can’t complain too much. It was a little jarring amidst the smoothness of the tale.

Overall, I say this was a nice read with a fast paced and intriguing story. The characters and plot were well thought out and executed, and it didn’t lag or put me to sleep in any spot. I would definitely recommend this book.

This book has the perfect setup for a feature film. You’ve got memorable characters, a romance and a mythical monster to defeat. It would be a supernatural treat to watch on the big screen.

Read the book review on another myth based romance: The Ghost Bride

If you love YA Literature, check out YALSA’S Top Ten Books of 2013

Our romance-themed entertainment site is on a mission to help you find the best period dramas, romance movies, TV shows, and books. Other topics include Jane Austen, Classic Hollywood, TV Couples, Fairy Tales, Romantic Living, Romanticism, and more. We’re damsels not in distress fighting for the all-new optimistic Romantic Revolution. Join us and subscribe. For more information, see our About, Old-Fashioned Romance 101, Modern Romanticism 101, and Romantic Living 101.
Pin this article to read later! And make sure to follow us on Pinterest.
By Rebecca Lane on November 19th, 2013