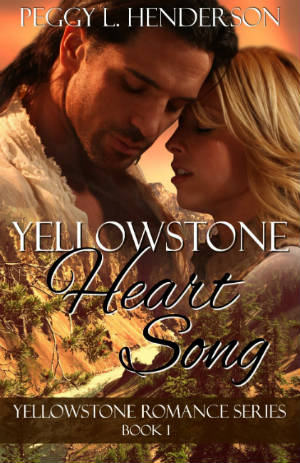 Aimee Donovan didn’t believe the man who came into her hospital room claiming he could send her back in time two hundred years to Yellowstone National Park. After all, she loved her trips to the wilderness in Yellowstone National  Park. She decided to play along. Well, she believed him when she ended up in 1810 Yellowstone. Through her journey through the woods, she meets Daniel Osborne. Too bad he hates women from getting his heart broken in the past. These two brave the wilderness and find each other’s hearts in Yellowstone.

I could not resist a book that has time travel and romance, so I decided I need to give this book a read. Yellowstone Heart Song takes you to the Yellowstone before the tourists.  Our heroine, Aimee, is strong-willed and does a great job roughing it until she falls down a cliff. That is when Daniel Osborne comes to her rescue. The two’s romance doesn’t start off easy. Daniel hates women, especially white women, because his heart was broken. The two argue but Aimee knows she has to stay with Daniel. First, it’s because Zach, the time traveler, will come for her in three months to send her back. Later on, it’s because she has fallen in love.

Their rocky romance is tempered with a lot of arguing. Aimee wants to go off on her own to explore, while Daniel tries to tell her it’s dangerous. The time period is different but human nature is still the same. Aimee experiences friendly and dangerous Native-American tribes. She sees the untainted beauty of Yellowstone before it became a tourist. She also saves lives using her medical knowledge. The book had many tense moments.

Aimee manages to keep the truth about herself secret. Remind you of another time traveling nurse? After lies, arguments, and a daring rescue, Daniel and Aimee finally come together. Aimee knows their time together is short and she has an important decision to make. It turns out there are more secrets to discover that are not her own.

This novel would work well on  Lifetime or Hallmark. They would have to tone down the love scene a bit, but it would work. The story would make a great romance film.

CONTENT NOTE: There is one sex scene in the novel and some profanity.

Our romance-themed entertainment site is on a mission to help you find the best period dramas, romance movies, TV shows, and books. Other topics include Jane Austen, Classic Hollywood, TV Couples, Fairy Tales, Romantic Living, Romanticism, and more. We’re damsels not in distress fighting for the all-new optimistic Romantic Revolution. Join us and subscribe. For more information, see our About, Old-Fashioned Romance 101, Modern Romanticism 101, and Romantic Living 101.
Pin this article to read later! And make sure to follow us on Pinterest.
By Mandi Harris on April 15th, 2015