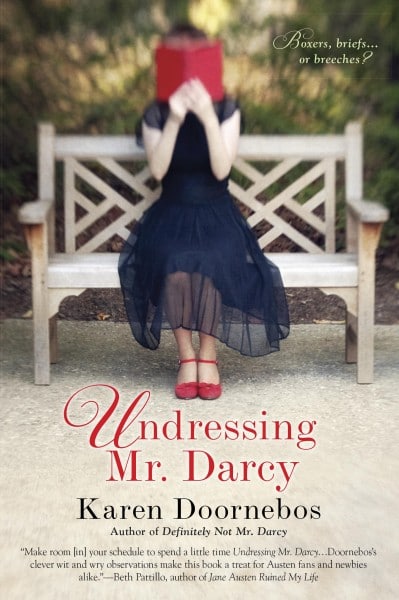 “Thirty-five-year-old American social media master Vanessa Roberts lives her thoroughly modern life with aplomb. So when her elderly Jane Austen–centric aunt needs her to take on the public relations for Julian Chancellor, a very private man from England who’s written a book called My Year as Mr. Darcy, Vanessa agrees. But she’s not “excessively diverted,” as Jane Austen would say.

Hardbound books, teacups, and quill pens fly in the face of her e-reader, coffee, and smartphone…

…Until she sees Julian take his tight breeches off for his Undressing Mr. Darcy show, an educational “striptease” down to his drawers to promote his book and help save his crumbling estate. The public relations expert suddenly realizes things have gotten…personal. But can this old-fashioned man claim her heart without so much as a GPS? It will take three festivals filled with Austen fans, a trip to England, an old frenemy, and a flirtatious pirate re-enactor to find out…”

Filled with wit, sassy one-liners, and good humor, Undressing Mr. Darcy is a fun read for Jane Austen fans looking for a sexy guilty pleasure read to take with you to the beach. While imperfect, this book never ceases to entertain and may just keep you up reading late into the night.

Undressing Mr. Darcy is a fun read for Jane Austen fans looking for a sexy guilty pleasure read to take with you to the beach.

At first however, I admit I wasn’t sold on the characterization of social media expert Vanessa Roberts. She was just too opposite from Jane Austen fans in that everything had to be modern and trendy and she spent too much time going off about how Jane Austen ruined her life because of her Aunt’s obsession with it growing up (her Aunt raised Vanessa). The set up was just too seemingly apparent. I predicted this anti-Austen fan would never fall for the Mr. Darcy type until of course she sees the error of her ways (like seeing how hot he is in his breeches) and she gets her happy ever after in the end, being converted to the wonders of Pride and Prejudice and so on along the way. So yes, the set up was a bit much but once I got sucked into the story and the intermittent Twitter hashtags thrown around the novel toned down, I started to enjoy the book and all of the characters from Vanessa’s old frenemy to her new Janeite bestie.

Then there is the romance. Should I root for the Mr. Darcy character Julian or the pirate (dressed like Jack Sparrow at a con) that keeps flirting with her at every occasion? I won’t spoil the surprises in store by saying just ‘who’ I was rooting for  but needless to say, the twists and turns are rather interesting and the triangle itself compelling and just a pure fun romp.

Check out Undressing Mr. Darcy for an enjoyable, light-hearted read about everything Jane Austen with passages that will make you laugh out loud (such as a Colin Firth Darcy statue she discovers in England). That being said, I do think there was too much focus on the sex in the book. When I personally read a book about Jane Austen and her fans, I prefer something slightly more old-fashioned (though I think the title did clue me into what content to expect). But this is a personal thing and if you like a good romance novel, this is a particularly enjoyable one to breeze through and read while drinking a nice cup of hot tea.

CONTENT NOTE: This book contains adult content with some sex scenes, so if you prefer cleaner novels, this may not be for you.

Check out our other Reviews HERE

Our romance-themed entertainment site is on a mission to help you find the best period dramas, romance movies, TV shows, and books. Other topics include Jane Austen, Classic Hollywood, TV Couples, Fairy Tales, Romantic Living, Romanticism, and more. We’re damsels not in distress fighting for the all-new optimistic Romantic Revolution. Join us and subscribe. For more information, see our About, Old-Fashioned Romance 101, Modern Romanticism 101, and Romantic Living 101.
Pin this article to read later! And make sure to follow us on Pinterest.
By Autumn Topping on December 10th, 2013