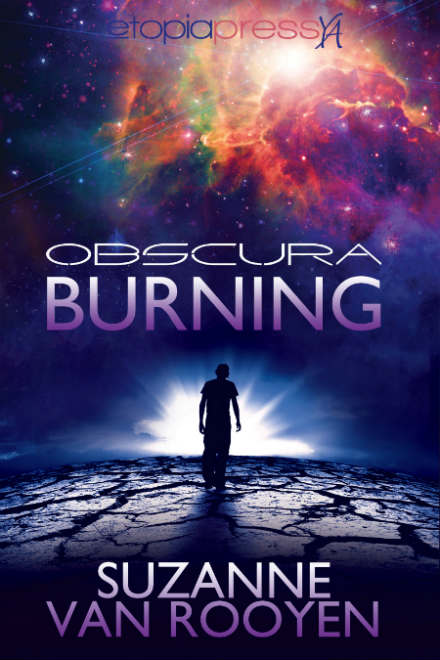 Obscura Burning is not your typical YA Science Fiction novel. With themes of physical abuse, alcoholism, homosexuality, death, coming of age, bullying, etc…it’s one heavy book. The science fiction aspect of the story becomes the backdrop for what really is a story about issues (all of which are challenges teenagers face today). What’s clever is that Suzanne Van Rooyen has provided an interesting, thought-provoking insight into teenage (even universal) problems with an unforgettable setting and premise that will keep you turning the pages to find out what happens next.

At first, each chapter switches between Kyle’s two realities (his boyfriend Danny alive in one and his friend Shira alive in the other) from one to the next. And it’s easy to keep track of. I will admit I found the beginning a little slow. One chapter he’s sleeping with his boyfriend Danny, the next with his best friend Shira; when all I really wanted was to get more into the mystery of Obscura itself. But as the story continued, a few chapters in, I was hooked. Which was the true reality? And which one did I ultimately want to be real?

Over time, figuring out which reality Kyle is in becomes more difficult to follow and purposely so. Without giving too much away, time is running out for Kyle. He needs to figure out the truth of Obscura and his own identity and personal truth before he dies or worse the world comes to an apocalyptic end. He shifts faster and more often (no longer cleanly divided between chapters), confusion spreading in his mind and therefore our own as his health deteriorates.

The characters were presented in a believable way with layers. I recognized many of the different, even realistic depictions of human archetypes and appreciated them. Kyle is your typical teenager trying to discover his identity as the world crumbles around him. The natural narcissism of teenage behavior is enhanced here to make a point. Told in “I” perspective, it’s easy to feel like you know Kyle and how he thinks. But as the story progresses, little elements sneak in about Kyle that surprises you. In fact, he’s not always likable. He makes choices you don’t agree with, not to mention how self-destructive his behavior is.

One of my favorite characters in the story was Mya. Because Kyle gets to know her in the story, she stands out to me more than Danny or Shira did – who felt almost dream-like (perhaps that was the point). Mya is a new friend Kyle makes in the Shira reality who becomes his confidante and partner in crime. There’s a question of romance there, but mostly it’s about the two of them uncovering the mystery and secrets of Obscura together. Every time Mya was in the story I smiled. I enjoyed the interactions between the two of them and anticipated the next time she would make an appearance.

Despite the layered characters, however, the characterization is not without its clichés, such as the son who disappoints the father who would rather have him play ball than study the arts. And there are a lot of tough issues presented that at times can feel a little bit too much. Perhaps cutting a couple would have strengthened the story.

That said, no doubt Suzanne Van Rooyen knows how to write. She spins words together to create magical imagery that makes you feel like you’re there and a part of Kyle’s world. Not only that, her use of metaphorical language is presented like a pro. Each word is written and perfected with skill; no detail was forgotten or left behind. Finding just the right combination of words is not an easy task, but in this Rooyen is extremely gifted.

For a YA novel, Obscura Burning does have some sexuality. So if you prefer cleaner content, you may want to skip this book. However, if you don’t mind some explicit material with tough themes, then this book is a great read. Also, if you don’t typically enjoy Science Fiction novels, and instead usually prefer contemporary realism, you should consider making an exception. Overall, Obscura Burning is a fascinating, psychological read and despite the heaviness is a page-turner. No doubt Suzanne Van Rooyen is an author to look out for, especially if she continues to write innovative, unique stories within the YA genre.

I automatically thought this would work as a limited TV series. Certainly, if you’ve seen the short-lived show Awake (about the man who wakes in different realities) you can see how a story like this would work in a television format. There are rich characters, surprise twists, a set up that would inspire theories (always fun in the fandom world) and the promise of good writing. Still, I don’t think it would be a show that should drag on for seasons, so a limited series would work best. There’s great material here to work with.

Content Note: There are a few explicit scenes, so read with caution.

“The world’s going to end in fire…and it’s all Kyle’s fault.

Kyle Wolfe’s world is about to crash and burn. Just weeks away from graduation, a fire kills Kyle’s two best friends and leaves him permanently scarred. A fire that Kyle accidentally set the night he cheated on his boyfriend Danny with their female friend, Shira. That same day, a strange new planet, Obscura, appears in the sky. And suddenly Kyle’s friends aren’t all that dead anymore.

Each time Kyle goes to sleep, he awakens to two different realities. In one, his boyfriend Danny is still alive, but Shira is dead. In the other, it’s Shira who’s alive…and now they’re friends with benefits. Shifting between realities is slowly killing him, and he’s not the only one dying. The world is dying with him. He’s pretty sure Obscura has something to do with it, but with his parents’ marriage imploding and realities shifting each time he closes his eyes, Kyle has problems enough without being the one in charge of saving the world…”