(I received a free copy of Tethers to write an honest review on The Silver Petticoat Review. I was not financially compensated for this post and all opinions are my own.)

Sword fights, mystery, action, adventure, and memorable characters that jump off the page. There is definitely something exciting to be said about Young Adult Fantasy Adventure stories. These kinds of fantastic tales were the stories you stayed up all night reading with the flashlight on (probably giving you the glasses your mother promised you’d get for squinting in the dark). And these were the stories you remembered and read over and over because you wanted to experience that world of adventure and mystery time and time again.

With each page, I catapulted back in time to my youth and entered the Victorian small town of Shraye…

Jack Croxall’s debut novel Tethers is one of these stories. With each page, I catapulted back in time to my youth and entered the Victorian small town of Shraye where through the eyes of young Karl Scheffer, I experienced a swashbuckling adventure full of fun and intrigue. 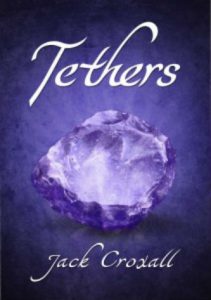 Karl Scheffer is a run of the mill teenage boy living a mundane, ordinary existence in a small town. He is an empathetic dreamer who longs for a better future than the one he believes he’s fated to have. With one blue eye and one green you know right off the bat he’s destined for something greater.

RELATED YA Book Review: The Falconer – A Story of Faery, Romance, and Steampunk Fantasy

The beginning of the story does start out slow, but it feels purposeful. Like a good Doctor Who episode, I can feel how trapped Karl is in a world that isn’t offering many choices. In this Victorian steampunk fantasy, however, Karl, of course, stumbles into the extraordinary, leaving the ordinary behind forever when he discovers a mysterious and anonymous journal bearing strange markings alongside his best friend Esther Emerson.

Here, the pace picks up with a quest, a purpose, and a way to live a life different than the one given them. Both Karl and Esther fully jump into the unknown, make new exciting friends, stumble upon danger, and hopefully save the day (you’ll have to read to find out if they do).

As the story progresses, the journal leads them to a mystifying object with powers: the Viniculum, and, of course, the baddies who want their hands on it for their own personal gain. Is the Viniculum magic? Scientifically explainable? These are questions Karl and Esther must ask as they find themselves tied to the object.

Headstrong and hot-tempered, she’s like a teenage Anne Shirley with a sword!

The best part of Tethers is the characters. Besides Karl, there is his partner in crime, dark-haired Esther (my favorite), a little spitfire with ambition and passion. Headstrong and hot-tempered, she’s like a teenage Anne Shirley with a sword! The two together make a dynamic duo and play off each other well. Like Harry, Hermione and Ron they work together better than they do alone. And they’re fun to read at that.

And who can forget the supporting players? There’s Mr. Cauldwell, Harland, Vivian and Dr. Parfitt (older characters interesting enough for a spin-off) who join Karl and Esther in the magical mystery, each with their own expertise and defined characteristics. Even the small characters were brilliantly distinctive. I especially loved Mr. Gilbey at the pub and his inability to resist Esther’s charm as he willingly spills secrets about the Viniculum in a scene reminiscent of Hagrid.

The setting in this story also plays a major part. The imagery and descriptions of the locations were so detailed and beautifully worded I felt like I was there. There’s something to say for Croxall’s scientific background. He describes settings like a master and makes the magic in the story feel scientifically sound.

While Tethers is at heart an adventure tale, there is something deeper at work here. Without giving anything away, the theme makes you question destiny. Are we fated to a future already written? Or do we create our own?

Overall, what works so well in Tethers, is that it is not condescending to its younger targeted audience (although adults will easily enjoy this book as well). Karl and Esther are treated first and foremost as human beings with flaws like any adult. Yet reading the story you can clearly see they are teenagers.

The story ends on a bit of a cliffhanger, leaving you wanting more. Tethers is part Sally Lockhart, part Harry Potter and even part Dark Visions (L.J. Smith), but as a whole, it’s all Jack Croxall. This is a fantastic debut for him and I look forward to the sequel. I know I’ll be up all night under the covers (this time with a lit up kindle) reading to find out what happens next.

Tethers quite simply should be a feature film with the promise of sequels. There’s sword fighting, action-adventure, twists and turns, engaging characters…and it is naturally visual. The story has a clear beginning, middle, and end that would work best as a movie on the big screen. I want to see what the magical Viniculum looks like. I want to see Esther learn how to fight with a sword. And to be frank, I’d like to see it with a bigger budget than a TV series. I think everyone else will too! It would be a fantastic family adventure with humor, mystery, and excitement.

Half of the royalties from the paperback version of Tethers will be donated to ME Research UK.

Our romance-themed entertainment site is on a mission to help you find the best period dramas, romance movies, TV shows, and books. Other topics include Jane Austen, Classic Hollywood, TV Couples, Fairy Tales, Romantic Living, Romanticism, and more. We’re damsels not in distress fighting for the all-new optimistic Romantic Revolution. Join us and subscribe. For more information, see our About, Old-Fashioned Romance 101, Modern Romanticism 101, and Romantic Living 101.
By Amber Topping on August 19th, 2013