I stumbled across The Falconer quite by accident. It was while I was doing research for another post.  I don’t remember what the search terms were, but somehow, halfway down the results page, there it was. A link for Elizabeth May’s The Falconer. Curious, I clicked. Intrigued, I settled in for a cup of tea and a good read.

The Falconer is the story of Aileana Kameron, a young aristocratic woman in 1844 Scotland. She lives the idle life of privilege, with the same dreams of marriage and family as any other young woman in her society. That is until she finds her mother brutally murdered at the hands of a faery.

In the year following her mother’s death, Aileana has one goal: to kill the faery that murdered her mother. She spends that year training and killing fae with Kiaran McKay, a faery with a mysterious past and a mission of his own. As she draws closer to her goal, Aileana learns that she is the last in a long line of women warriors known as Falconers. Her thirst for revenge wars with her legacy. She is the last hope in saving humanity from extinction by the faery. 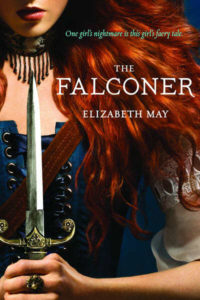 From the beginning, I rooted for Aileana. The moment she witnesses her mother’s gruesome death, her life changes forever. Aileana lives in two worlds. In one, she is virtually a pariah in society. Whispers surround her and everyone believes Aileana played a role in her mother’s murder. Her father neglects her, ignoring her and sees her only as a bargaining tool for marriage. Her only true friend is Catherine, whom she’s known since childhood. Even so, Aileana’s lies to cover her other life is a heavy shadow on their friendship.

In her other world, Aileana is a fighter, a weapon with a thirst for revenge. Aided by a pixie faery, Derrick, Aileana hunts for her mother’s murderer. Every night, Aileana sneaks from her home to hunt or train with Kiaran, a darkly, handsome faery who once saved her life. It is during these stolen moments where Aileana feels the most alive. Where she sees her value and where she believes she has the most control. It’s this world of fantasy where, oddly, Aileana feels most at home.

What May does so well from the beginning is to capture Aileana’s burning desire for revenge. It’s her sole focus, the reason for every scar she wears on her body as badges of honor. You can’t help but feel Aileana’s pain or her overwhelming grief. Not far beneath Aileana’s emotions is the horror of the memory of her mother’s death. A memory that leaves her paralyzed with fear and one she tucks deep inside. Aileana finds some solace in her inventions. In the past, ‘tinkering’ was something she shared with her mother. Now, she designs weapons to destroy the fae and modes of transportation to escape them.

When Aileana discovers she is a Falconer, she discovers it is one of Kiaran’s many secrets.  It is not surprising the novel falls into the cliché of the handsome yet mysterious man (or faery!) with a world of secrets. However, Kiaran’s motives to keeping her heritage a secret are unclear. So, what that secret does do is serve to take away Aileana’s purpose – her quest for revenge. The one place where she felt in control is suddenly no better than her life at home. It’s here that the story focuses. So much of the last year of Aileana’s life has been beyond her control. The one thing she thought was different turns out to be nothing more than a ruse.

The Falconer is a young adult novel, so of course romance plays a vital role. There is a weak attempt at creating a love triangle. However, the introduction of Gavin, Catherine’s older brother, falters. Childhood friends, Gavin and Aileana are genuinely fond of each other. What May fails to do, however, is capture the essence of their friendship. Their history is barely touched upon, leaving their connection somewhat lacking. As a result, that angst that normally accompanies a love triangle is missing from the beginning. Perhaps the intent was never to make a love triangle. If so, mishandling Gavin’s character was a disservice. There was potential for this character than a mere plot point.

If Gavin and Aileana’s relationship is lacking, her relationship with Kiaran certainly is not. The tension is there from the beginning. Hidden behind banter and sarcasm, it reveals itself in the unexpected moments of shared insight. Their attraction teases readers until suddenly, it’s no longer a tease. Once it’s there, May’s prose captures the emotional turmoil of Kiaran and Aileana in a delicious way that will make you sigh in delight.

Drawbacks to The Falconer

There is a delicate line to tread when describing a character’s journey. Each failure and success serve a purpose. Learning from their lessons, understanding their flaws, and embracing their weaknesses and strengths are how a character develops. Each of these milestones must draw in the reader. So, in pivotal moments there must be balance between description and progress. Too long, and you’ll lose the reader. Too short, and it lacks the necessary emotional punch. The Falconer struggles here, falling victim to rushed explanations or lengthy, overwrought emotional struggle.

There are moments where the story achieves a beautiful build up to one singular moment. Yet, it’s lost as the next moment is either too hastily achieved or drawn out as to become uninteresting. Lastly, there are extremely verbose passages which muddle the story in an effort to tie one plot point to another. Sometimes, these passages leave you scratching your head, wondering what purpose they served. Even so, those sections are few and far between and therefore, easy to ignore.

Final Thoughts on The Falconer

The Falconer is not your typical story of faery versus human. Introducing a line of female warriors whose sole purpose is to fight the faery was a savvy move on May’s part. Aside from Aileana, many of the characters were underdeveloped and it was hard to appreciate their importance to her. Despite aspects of the story needing more “fleshing out,” May successfully creates an intriguing world where the age-old fight between faeries and humans receives a fresh twist with steampunk elements.

Fair warning, The Falconer is the first in a trilogy and May does not use the conventional approach of having each book being one part of the overall story. Instead, each ends on a cliffhanger, much like a television series. To find out whether Aileana saves humankind, you have to read all three.

Have you read The Falconer? What did you think? What are your favorite romantic faery stories? Share your thoughts with me in the comments below!

Our romance-themed entertainment site is on a mission to help you find the best period dramas, romance movies, TV shows, and books. Other topics include Jane Austen, Classic Hollywood, TV Couples, Fairy Tales, Romantic Living, Romanticism, and more. We’re damsels not in distress fighting for the all-new optimistic Romantic Revolution. Join us and subscribe. For more information, see our About, Old-Fashioned Romance 101, Modern Romanticism 101, and Romantic Living 101.
Pin this article to read later! And make sure to follow us on Pinterest.
By Catherine on July 10th, 2017

3 thoughts on “YA Book Review: The Falconer – A Story of Faery, Romance, and Steampunk Fantasy”