Few are unfamiliar with the name Leo Tolstoy. The famous Russian author’s name is often mentioned as one of literature’s great writers. His most popular and well-known works include both War and Peace and Anna Karenina.

With its exploration of themes such as faithfulness, love, passion, family, adultery, hypocrisy and jealousy, Anna Karenina is a rich source of storytelling. There are numerous film and television series adaptations of this literature classic. It has also appeared in opera, ballet, and the theater.  Having previously seen two of these films I can say some of these adaptations are better than others.

I recently had the opportunity to view the 2013 European production of Anna Karenina and finally felt like I understood Tolstoy’s story.

Though the source novel is long and much more complex, most adaptations, focus mostly on the character of Anna Karenina herself. Anna is the wife of the much older Count Karenin. She is content in her marriage until she meets the dashing bachelor and ladies man Count Vronsky. He is immediately smitten, but for the sake of her young son and her standing in society, Anna resists his overtures.

However, Vronsky’s attention in the face of her husband’s neglect encourages Anna to believe that she is in love with Vronsky. Defying convention, the two run away together. Though they are very much in love, their romance comes at great cost to Anna. Not only is she isolated from her beloved son, but most of society shuns her.

The disparity in society’s reactions reveals their hypocrisy. Doors are closed to her but Vronsky meets less judgment and resistance. Anna becomes more and more desperate to hold on to Vronsky. Incidentally, her doubt and jealousy drive a wedge in their relationship.

Unlike some other adaptations, this version also includes the parallel storyline of Konstantin Levin and Anna’s family friend Princess Kitty. (You can also see this story in the Keira Knightley film.) Levin is in love with Kitty, but she has eyes for Vronsky and refuses his marriage proposal. Heartbroken, he returns to his country estate and Kitty travels abroad.

However, Kitty eventually matures and accepts Levin’s second proposal. But her prior rejection creates a wall between them in their marriage. Kitty learns to love her new husband, but he is wary of being too vulnerable with her.

Overall, these two couples navigate the complexities of their relationships and provide opposing portraits of passion and love. 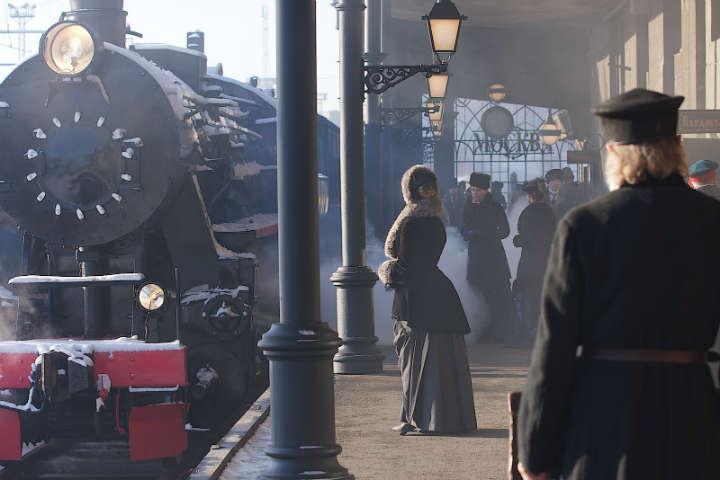 I have never read Tolstoy’s novel, so my only exposure to Anna Karenina is the two films I’ve seen prior to this adaptation.  Though both of those films are well made, the run time restrains the story and characters significantly. That is why this European mini-series adaptation impresses me so much. It has more time to explore the various threads of Tolstoy’s novel, thereby weaving together a more detailed and compelling drama.

Anna Karenina is expertly and beautifully filmed. It feels less like a film production and very much as a story come to life. The mostly snowy settings are not only beautiful but also help reinforce the coldness and emptiness, not only of Anna’s marriage but also the upper class to which she belongs.

Moreover, the homes and ballrooms are full of priceless art and furnishings befitting the owners. But there is no true comfort to be found in these things. The costumes are gorgeous, even showy, meant to display the wealth and beauty of the women wearing them. But it is all a facade, much like their relationships.

COMPLEX CHARACTERS FOR THE WIN

One thing I appreciate about this particular adaptation is the contrast between Anna’s relationship with Vronsky and Levin’s with Kitty. This contrast adds dimension to Anna’s desperate grasp for real love. Anna and Vronsky pursue their relationship with passion and indiscretion, heedless to the consequences. Kitty and Levin, however, approach their love with intentionality, patience, and reserve. This allows their love to deepen and mature into something lasting. In contrast, Anna and Vronsky’s selfish approach leads to so much destruction and not just for themselves.

By far, my favorite thing about this Anna Karenina is the added depth of characterization. Anna is a tragic figure, a lonely woman willing to sacrifice everything for love. I never truly understood this about Anna before seeing this version. She isn’t completely heedless to the selfishness of her action. And her interest in Vronsky isn’t just about lust either, as I previously assumed.  For the first time, I  also believed that Vronsky’s attachment to Anna is sincere. He’s not just some ladies man out for a good time. Although he is not a man of much depth of character, his love is true.

Likewise, I also enjoyed a deeper glimpse inside the lives and characters of Anna’s brother and sister-in-law Stiva and Dolly. How ironic it is that Anna urges Dolly to ignore her brother’s philanderings before later succumbing to her own. Dolly proves to be not only a stalwart in-law but a faithful friend to Anna. She also plays a greater role in both of the main relationships in this story.

However, it is the depiction of Anna’s husband, Karenin, that proved to be the greatest revelation to me. Past portrayals show him as a cold, cruel, almost inhuman man. And there are aspects of that in his nature. But here, he is a much more complex, much more human than that. Perhaps, he isn’t capable of truly loving his wife, maybe he is overly concerned with public opinion, but he also willingly sets his pride and his will aside at times. He tries to do what is right instead of what revenge would demand. Karenin is not a man of great emotion and yet he tore emotion out of me as he wrestled with his duty.

Anna Karenina is one of literature’s great romantic tragedies, but that is not all there is to the story. Some prior adaptations have failed to capture the complexity of the plot, its’ characters, and themes. However, I believe this mini-series has done a much better job in capturing what Tolstoy’s gifted pen recorded. This adaptation ably displays all the drama, the grandeur, the wretchedness, the romance of this literature classic. If you have yet to discover Anna Karenina then you can’t go wrong with this adaptation. As an extra plus, the always swoony Santiago Cabrera plays Vronsky in this adaptation!

Where to Watch: Currently available on Amazon Prime in the US. Check this out while still available.

Content Note: Though not specifically rated, I would give it a PG-13 rating, for a few uses of language and some sensuality

Have you ever seen Anna Karenina? Do you have a favorite adaptation? What are your thoughts on film adaptations of classic literature?

Our romance-themed entertainment site is on a mission to help you find the best period dramas, romance movies, TV shows, and books. Other topics include Jane Austen, Classic Hollywood, TV Couples, Fairy Tales, Romantic Living, Romanticism, and more. We’re damsels not in distress fighting for the all-new optimistic Romantic Revolution. Join us and subscribe. For more information, see our About, Old-Fashioned Romance 101, Modern Romanticism 101, and Romantic Living 101.
Pin this article to read later! And make sure to follow us on Pinterest.
By Brittaney B. on February 18th, 2019