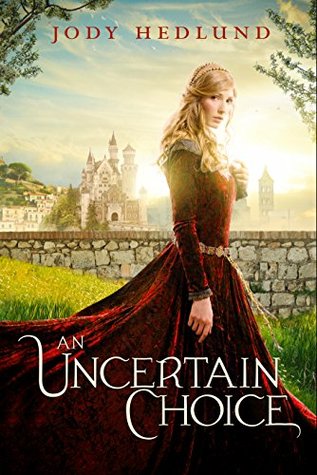 “Due to her parents’ promise at her birth, Lady Rosemarie has been prepared to become a nun on the day she turns eighteen. Then, shortly before her birthday, a friend of her father’s enters the kingdom and proclaims her parents’ will left a second choice—if Rosemarie can marry before the eve of her eighteenth year, she will be exempt from the ancient vow.

Before long, Rosemarie is presented with the three most handsome and brave knights in the land. But when the knights’ arrival results in a series of attacks within her land, she begins to wonder if the convent is the best place after all. If only one of the knights—the one who appears the most guilty—had not already captured her heart.”

The beautiful prose that is Jody Hedlund’s style has previously only been found in her adult, inspirational fiction. She had readers swoony over a certain Noble Groom (and a kiss to go with it!) and has taken readers back to many a fascinating era in history. In 2015, Jody took on an unfamiliar genre: Young Adult. Though the novel is still set in historical times, this book is certainly a step back from her usual normal and yet it rises, and in many instances surpasses the expectations readers will have had for the book. The story itself is like a Cinderella-esque fairytale with its own vision of the story. There’s a deadline approaching that unless altered will forever change Rosemarie’s future, and though there is no glass slipper or pumpkin carriage, there is plenty of romance and intrigue as well as a “Prince Charming.” Or as is the case here, three potential heroes – and what dashing young men they are! Each of the heroes is special in their own right.

Jody began this saga in her novella The Vow, which I would encourage you to read prior to picking up An Uncertain Choice. It offers some insight and background into Rosemarie’s life and the heartbreak she endures four years later during the events of this novel. Normally I am not any fan of love triangles, which this novel does have a propensity towards, however thanks to its wholesome, innocent heroine, this isn’t the traditional kind of love triangle. Many love triangles introduce us to a wishy-washy heroine who flip-flops between the men vying for her attentions; this novel doesn’t put Rosemarie in that situation. Rosemarie’s emotions are more about realizing what the meaning of love is – what you’re meant to feel, how you know what true love is – versus being undecided about the men she’s faced with. She lived a sheltered life and as a result of the vow, her entire eighteen year life span was in preparation to live a life of solitude. A knowledge she had from the age of fourteen. Don’t misunderstand, Rosemarie isn’t some wilting flower, but she is a young woman coming of age in an era when chivalry and romance was at its best.

I have to confess, medieval stories are a hard sell in my reading habits. But having known Jody Hedlund’s previous books, I had little doubt this novel was going to live up to the hype. The first person (we switch off between two perspectives though mainly stay with Rosemarie) prose is beautifully and simplistically perfect. I loved that the details of the time period didn’t overwhelm the fictional story, yet there is still enough to satisfy avid historians. Rosemarie’s courtship is the primary of this novel along with the danger which threatens her happy ending. Balancing the historical aspects with these characters seems to be an asset to the books likability. Some novels get lost in the history, which is all well and good, but when one is reading a fictional tale, I expect more than a textbook read. The book is both interesting with its details and doesn’t shirk on its promise of being an adventurous medieval adventure.

Aside from the atmosphere and breath-catching sword fights, this is a perfect easy read for anyone wanting a period read. It sets up what I am sure will be a rewarding series and of course ends with a new threat that might throw Rosemarie into more danger or at the very least mean she’ll have to rise to the occasion of becoming an even better ruler. I love Rosemarie as a heroine. She’s kind (she’s vehemently opposed to torture as means of punishment) and yet desires to become the ruler that her parent’s would be proud of. Given what we learn of Rosemarie and her moral upbringing, she’s well on her way to doing just that.

I can honestly say, this is easily one of my favorite YA reads. It officially releases March 3rd, so be sure to add it to your to-be-read.

The only film that comes to mind when I visualize this world is the 1997 A&E adaptation of Ivanhoe. It doesn’t really fit with the YA theme, but the story is full of knights and the women who capture their hearts. There is also a Princess of Thieves, one of Keira Knightley’s early roles, or BBC’s Robin Hood series type feel to it. So a TV production of some sort would be best.

Our romance-themed entertainment site is on a mission to help you find the best period dramas, romance movies, TV shows, and books. Other topics include Jane Austen, Classic Hollywood, TV Couples, Fairy Tales, Romantic Living, Romanticism, and more. We’re damsels not in distress fighting for the all-new optimistic Romantic Revolution. Join us and subscribe. For more information, see our About, Old-Fashioned Romance 101, Modern Romanticism 101, and Romantic Living 101.
Pin this article to read later! And make sure to follow us on Pinterest.
By Rissi JC on February 19th, 2015