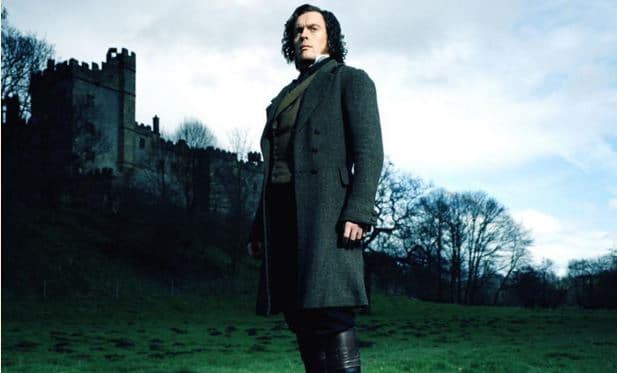 Mr. Edward Rochester is a complex and beloved romantic hero to many of us. A mercurial Byronic Hero who is as romantic as he is unpredictable. Here is a rundown of his most memorable and romantic scenes, the scenes we return to time and again.

8 Times Mr. Rochester Made Us Swoon

At this point, Jane and Rochester have begun to understand each other which is out of the ordinary for a master and governess. Jane hears a demonic laugh outside her door and goes to investigate. She sees a candle knocked over and smoke. She finds  Mr. Rochester asleep with his bed set alight. After she wakes him and the fire is put out, he takes her hand. He thanks her earnestly, refusing to let go of her hand for some time.

Most Romantic Line: “I knew… you would do me good in some way… I saw it in your eyes when I first beheld you: their expression and smile did not strike delight to my very inmost heart so for nothing.”

When Richard Mason is safely away in the carriage, Mr. Rochester attempts to explain the situation without giving too much away. They go in for some refreshment. Rochester begins to talk in vague terms of how he has been taking refuge from his difficult past in empty pleasures but has recently met one who fills him with a new passion for life. Jane cannot know that he is talking about her and not Blanche Ingram.

Most Romantic Line:“Is the wandering and sinful …man justified in daring the world’s opinion, in order to attach to him for ever this gentle, gracious, genial stranger…?

Jane gets word from Gateshead that her Aunt Reed is sick and bids her come. Jane asks for leave. Rochester is suspicious of these relations she has not previously mentioned. He does not want her to go. First, he offers her far more money than she needs, then decides to only give her part of her salary so she will not stay away from him too long. When she bids him goodbye he is disappointed when her farewell is less familiar than he would have hoped.

Most Romantic Line: “Come back for it then.”

Jane is deeply sad because she believes she must leave Thornfield and her beloved master soon due to his upcoming nuptials. He asks her if she will be happy to leave. She is outraged at his seeming callousness and disregard for her feelings. She is miserable but resolute that she must go. He asks her to stay and marry him. She does not believe him at first but when she does, she joyfully accepts.

Most Romantic Line: “I ask you to pass through life at my side – to be my second self and best earthly companion.”

Rochester welcomes his bride to be who comes down in the morning, radiant and happy. He is attentive and insists on showering her in jewels. Jane will have none of it. He tries to give her material tokens of his affection but she does not budge. She intends for things to go on as they have done so people will take their wish to get marred seriously. He eventually capitulates, grudgingly.

Most Romantic Line: “Jane, you look blooming and smiling and pretty… truly pretty this morning. Is this my pale, little elf? Is this my mustard-seed?”

Rochester waits outside Jane’s room until she comes out after all is revealed. She feels faint and he carries her to the fireside, getting her a drink. He tells her the whole story and begs her to stay with him, knowing it is no use.

Most Romantic Line: “Oh Jane! My hope-my love- my life!”

After her travels, Jane hears of Mr. Rochester’s fate and finds him at Ferndean Manor. She pretends to be a servant at the house and surprises him when she takes Mary’s place, bringing him water. When he discovers that it is her, he believes he is imagining it as he has dreamt of her returning many times. He is overjoyed to discover she is real.

Most Romantic Line: “Such dreams I have had at night when I have clasped her once more to my heart, as I do now; and kissed her, as thus-and felt that she loved me, and trusted that she would never leave me.”

Jane and Mr. Rochester sit together outside. He believes that she is disgusted by him now, only wanting to be his nurse. He is jealous of St John, believing him to be who she truly loves now. She teases him, in a way he once teased her. He confesses that he wants a wife, not a nursemaid, that he loves her still. Jane confesses her own love but Rochester is not entirely convinced. He proposes in a roundabout fashion and she finally convinces him that she will joyfully accept him.

Most Romantic Line: “I will at least choose–her I love best.”

Which is your favorite? Do you have another moment you would prefer to be included? Is Mr. Rochester your favorite Byronic Hero or is that honor reserved for another?

Our romance-themed entertainment site is on a mission to help you find the best period dramas, romance movies, TV shows, and books. Other topics include Jane Austen, Classic Hollywood, TV Couples, Fairy Tales, Romantic Living, Romanticism, and more. We’re damsels not in distress fighting for the all-new optimistic Romantic Revolution. Join us and subscribe. For more information, see our About, Old-Fashioned Romance 101, Modern Romanticism 101, and Romantic Living 101.
Pin this article to read later! And make sure to follow us on Pinterest.
By Elinor Cackett on July 13th, 2016

2 thoughts on “8 Times Mr. Rochester Made Us Swoon”