Sometimes (all the time) it is exceedingly worthwhile to sit through movies with dark, quiet, brooding leading men who are perpetually frowning or looking gravely serious because the one fleeting moment they smile, you just about die inside. This article aims to capture those rare moments of some of the best smiles captured by period drama actors. It required lots of research in which I had to spend many hours re-watching period dramas featuring these hot guys. Alas, someone had to sacrifice.

It only makes sense to begin this post with the man who truly began it all (for me anyway). Matthew Macfayden was so dour in this film that I disliked him intensely and was distraught that this actor was chosen for the Mr. Darcy role. He wasn’t even hot! But then, there came one scene where he laughs, and his smile transformed him. From then on, I realized there was great value in grumps with a heart of gold. It seems that the rest of the world came to this conclusion before me because dark, quiet, brooding romantic interests who are SECRETLY BURSTING WITH LOVE INSIDE are the true stars of period dramas and romantic comedies. Are you a character with stoicism or angst? If so, WE ARE YOURS!

There has literally never been a more attractive man.

Is this really even a question? WHO WOULD REFUSE SUCH AN OFFER? OH, I KNOW. NO ONE.

#4: DANIEL LISSING as Jack Thornton from When Calls the Heart

Besides having the names “Jack,” and “Thornton,” which, from the previous posts you can see contributes to extreme hotness, Jack is hot in his own right for being mischievous, wicked, and consistently noble towards proper schoolteacher Elizabeth Thatcher in one of my favorite shows ever, When Calls the Heart.

#5: Sam HOTTIE MCSCOTNESS HEUGHAN as Jamie Fraser (AKA THE BEST NOBLEST, DREAMIEST CHARACTER YOU HAVE EVER KNOWN in Outlander) 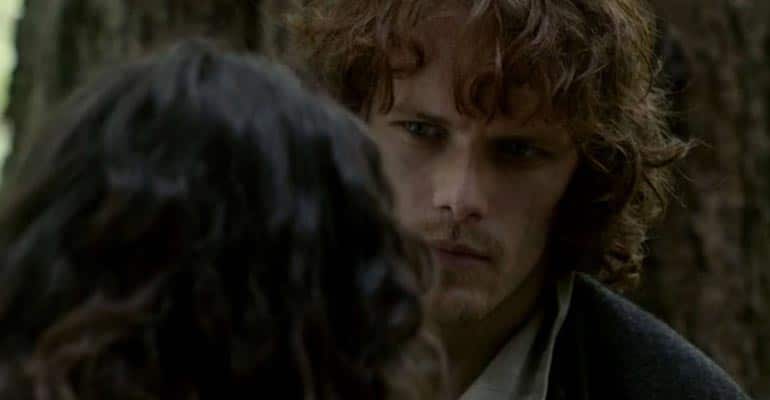 I felt the other picture didn’t do justice to Jamie’s blue eyes so I included this one where he listens intently to Claire’s feelings and says things like, “I hear ye,” and “I believe ye,” and “I love ye.” I LOVE YE ALSO, JAMIE.

#6: HENRY CAVILL as Stephen Colley in I Capture the Castle

The moment you wonder why the heck they cast Henry Cavill as the secondary love interest instead of the main one?? (Also, when you realize he was hotter as a poor English farmer than as Superman.)

#7: RALPH FIENNES as Almasy in The English Patient.

Ralph Fiennes was fire in this movie. A cold, bleak, severely awkward and intensely introverted fire behind ferocious green eyes, BUT A FIRE NONETHELESS. 🔥🔥🔥🔥

This is the CUTEST little teasing grin ever to grace screens. I imagine the only character that could come close to achieving this grin is Eugenides from The Queen’s Thief series. But alas, his wicked charm has not been made to grace televisions as Mr. Tilney’s so fortunately has.

Yeah, I put Tom Hiddleston and J.J Feild together BECAUSE THEY TOTALLY LOOK SIMILAR. (Right??)

Tom Hiddleston appears to be taking a breath in this photo, which is something I must often do when he is on-screen since he is, himself, breathtaking.

#10: MICHIEL HUISMAN as Ellis from Age of Adaline

Age of Adaline is not technically a period drama but IT SORT OF IS, since Blake Lively is the period drama in herself...also this photo of Michiel Huisman and books was too much to pass up. Do you know how they met in the movie? HE JOINED THE LIBRARY BOARD THAT SHE WAS ALREADY ON. THEN HE ASKED HER OUT AFTER HE DONATED A HUGE COLLECTION OF BOOKS TO THE LIBRARY. MEET CUTE OF ALL MEET CUTES IF YOU ASK ME. AHEM FUTURE HUSBAND. I AM LOOKING AT YOU.

RELATED | Romantic Moment of the Week: The Age of Adaline and Book Flowers

James McAvoy is wickedly cute in Becoming Jane as the only suitor who ever truly caught Jane’s interest. But here, he is smiling a sweet smile after backing up our spirited and prickly Jane. Also those blue eyes and perfect hair. I have loved you since you were a faun in Narnia, James McAvoy, and I will never watch Atonement for what they did to you!!!

I have not seen this movie (yet) but this gaze is very entrancing indeed. Also the locks. I already don’t care about your questionable history, Mr. Rochester! Brood around me as you like!

Laurence Olivier, in addition to having the smoothest name ever, is stupendously handsome in this film. He only smiles around Catherine. But that’s ok because that’s how I like my men. Possessive and made to suffer in my memory forever.

#14: EWAN MCGREGOR as Catcher Block in Down With Love

Tell me this picture of Ewan McGregor smiling isn’t your screen saver and I will tell you YOU ARE LYING.

#15: JONATHAN CROMBIE as Gilbert Blythe in Anne of Green Gables

Gilbert is too precious for words…