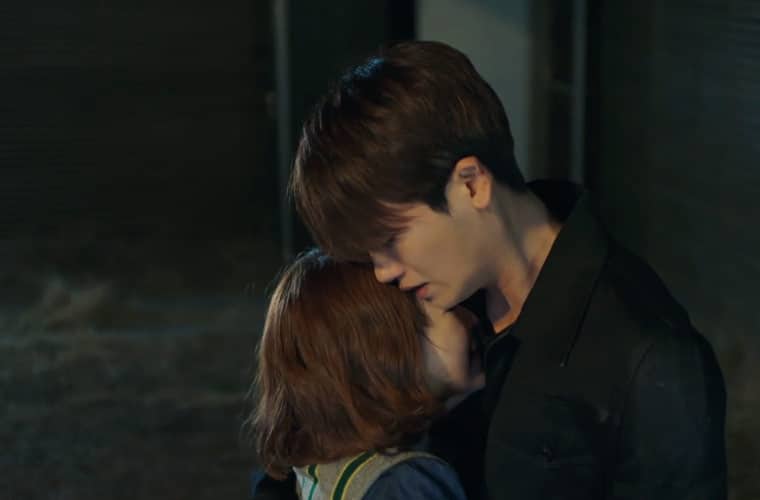 The stakes continue to rise as Bong-Soon and her friends must face their formidable opponent, testing not only their skills but their emotions and relationships.

Bong-Soon relays the kidnapper’s threats against her to Min-Hyuk. She asks him to help her find where he’s hiding the girls. Min-Hyuk assures her that they’ll find Kyung-Shim. He gives Bong-Soon a necklace (which has a tracker in it) and she promises to face the kidnapper together.

While Min-Hyuk searches for Kyung-Shim’s whereabouts, Bong-Soon listens again to the video that the kidnapper sent of Kyung-Shim. In the background, she hears sounds from the junkyard. She rushes over there. Min-Hyuk’s tracker alerts him that she’s on the move – and he goes after her.

Bong-Soon shoves cars aside frantically searches through the junkyard. She finds a hidden door leading to the underground prison. The kidnapper sees her coming through his cameras and escapes with Kyung-Shim. Bong-Soon breaks down the barred doors and rescues the captive girls. The kidnapper’s henchman sets fire to several cars which explode. Bong-Soon protects the girls from the flames and helps them out. The police arrive (because of the explosions) and Bong-Soon sneaks off.

Minh-Hyuk arrives and drives her away. He’s upset that she went alone, but Bong-Soon is still distraught that she couldn’t find Kyung-Shim. Bong-Soon visits with Gook-Du in the café at her office and shows him the video of Kyung-Shim, asking for his help. 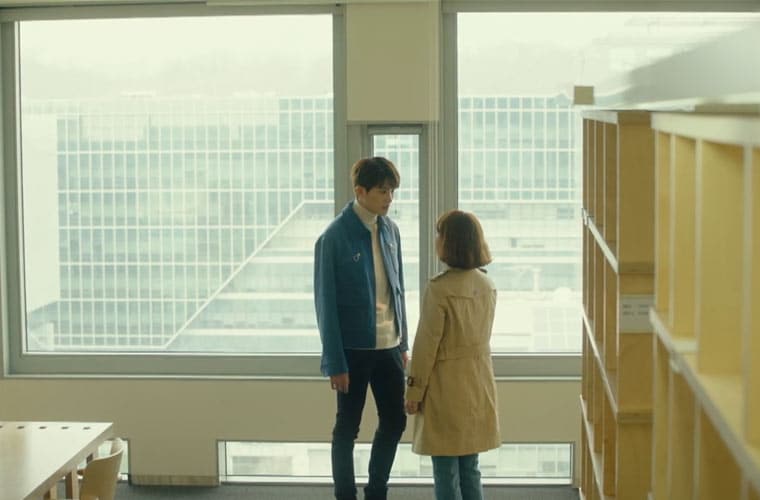 Min-Hyuk approaches Bong-Soon at the office. He’s angry and emotional that he has to support her as a hero when he’s terrified that he’ll lose her. Bong-Soon reminds him that he trained her for this; didn’t he realize she’d be in danger? But Min-Hyuk says he didn’t realize he’d love her this much. Bong-Soon steels herself and tells him they have to break-up. She walks away with tears in her eyes, believing that to protect Min-Hyuk, and to be able to save Kyung-Shim, she has to do this alone.

Min-Hyuk and Bong-Soon avoid each other at work, but eventually, he can’t take any longer. He finds Bong-Soon and asks her to at least eat, but she says she can’t. He apologizes for earlier but Bong-Soon tells him not to worry about her anymore.

The kidnapper finally calls Bong-Soon’s phone again. He tells her to meet him that night alone if she wants to save Kyung-Shim. Meanwhile, Min-Hyuk leaves Bong-Soon’s favorite food at her desk. That night, Min-Hyuk uses his tracker to see Bong-Soon on the move again. He calls Gook-Du asking for back-up. 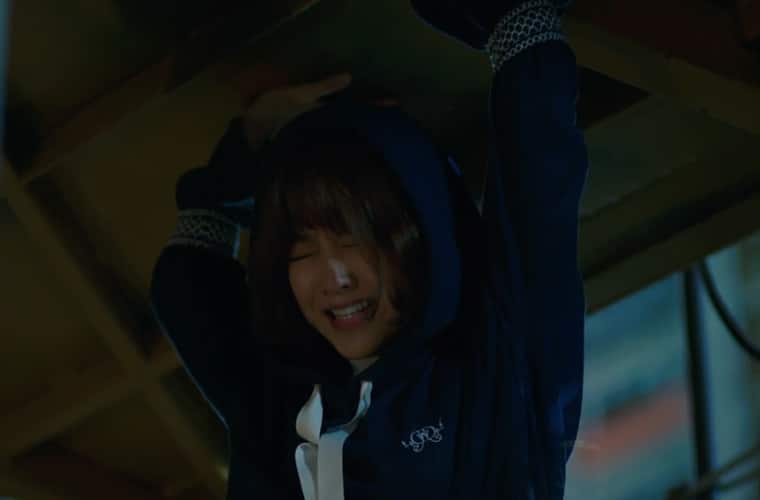 Bong-Soon shows up at a construction site. In the distance she sees Kyung-Shim tied up as a huge construction elevator lift descends towards her with the masked kidnapper inside! Bong-Soon rushes over and pushes underneath the lift with all her might. She throws it into the air and it crashes, injuring the masked kidnapper. But Kyung-Shim tells Bong-Soon that wasn’t the villain – but an innocent that the kidnapper forced to wear his mask. Bong-Soon feels her powers fading from her!

The kidnapper appears now, armed with a rifle. Bong-Soon grabs his gun but she no longer has the strength to rip it from him! He grabs her in a chokehold and tosses her aside. Just then Min-Hyuk shows up, attacking the kidnapper. They fight using martial arts. The kidnapper runs to a car just as Gook-Du appears. He shoots the kidnapper in the arm just as he races off!

Gook-Du pursues the kidnapper in a car chase so fast that the psycho baddie ends up driving his car off a cliff into a lake. Though the police search the lake, his body isn’t recovered.

Min-Hyuk takes Bong-Soon to his place and calls her parents, reassuring them that Bong-Soon is okay. She wakes up in the night to see Min-Hyuk asleep beside her. Her movement wakes him up. He reaffirms how much he cares for her. Tears escape her eyes as she admits that she cares deeply for him too. He says he loves her.

After Bong-Soon gets up she tries to crush an apple to make juice like usual, but can’t. Min-Hyuk realizes she’s lost her powers and puts the apple in the juicer for her. At her home, Bong-Soon reunites with Kyung-Shim. They cry and hug, thankful to be together again. Bong-Soon’s family learns that she’s lost her powers. Her mom gives her an encouraging talk – admitting that though Bong-Soon feels empty without her powers now, eventually she’ll be okay.

At the office, Bong-Soon meets with Min-Hyuk. He asks her how she is. She admits she’s not okay, but believes she’ll get used to being “not special” anymore. He assures her he feels the same for her, powers or not. That night they go on a date together and Min-Hyuk gives her a quick kiss.

Meanwhile, the baddie is still alive (of course, we all knew it)! He’s got his vengeful eyes on Min-Hyuk now. He cuts his hair and dresses up like a reporter, showing up at Ainsoft.

Gook-Du arrives at Ainsoft to speak with Bong-Soon. On the way up he catches a glimpse of the kidnapper. Immediately he runs after him, but he escapes into an elevator. Gook-Du calls Min-Hyuk who acts quickly, alerting his workers to lock the building down. Min-Hyuk leaves Bong-Soon with a secretary to search for the kidnapper. The psycho baddie gets on the loudspeaker, threatening Min-Hyuk with a game: find him before he blows the building up in 15 minutes. 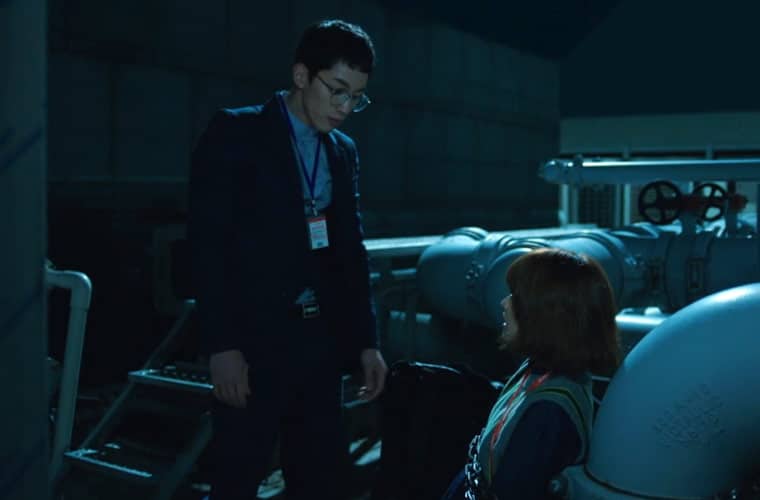 Min-Hyuk orders a full evacuation of the building and shuts the power down, leaving only emergency lights. Meanwhile, the kidnapper snatches Bong-Soon and takes her to the roof. He hits her, mocking her weakness now that she’s lost her powers. He then chains her up and attaches the bomb to her.

Min-Hyuk frantically searches the building when he gets a call from Gook-Du: Bong-Soon is missing. Min-Hyuk uses the tracker to find her on the roof, but she’s behind a chained door. He beats the door mercilessly until his hands are bloody but he can’t break through. Hearing him on the other side, Bong-Soon screams at him to escape while he can. But Min-Hyuk laughs and tells her he’ll never abandon her. He comforts her that they’ll go together, while she sobs, begging him to save himself.

What an emotional ride! With noble sacrifices, breakups, a car chase, and several showdowns with the kidnapper, Bong-Soon, Gook-Du, and Min-Hyuk had their work cut out for them!

While I’m not a big fan of the whole “we have to break-up now” trope, I thought it was handled well here as it embraced the characteristic superhero dilemma that every hero faces. From Spiderman to Superman, superheroes have struggled with protecting their loved ones by keeping them at arms’ length. Bong-Soon never wanted all the responsibility of being a hero, but when faced with the decision, she knew that saving Kyung-Shim (and protecting Min-Hyuk) came first. 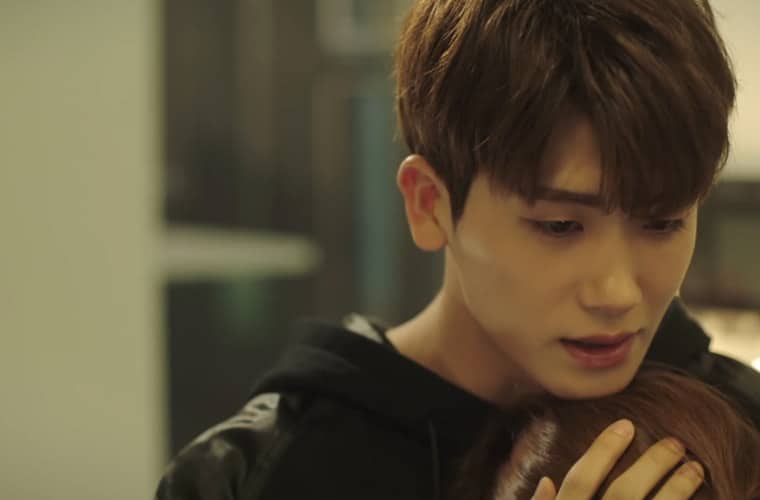 On the other side of the superhero relationship, we have Min-Hyuk’s dilemma of worrying for the safety of his loved one. Min-Hyuk admitted that he knew he had to support Bong-Soon as the heroine, but it didn’t make it any less painful for him. His fear of losing someone (amplified by the loss of his mother) makes it difficult for him to be unemotionally involved. But of course, Min-Hyuk’s stubbornness only lasts for so long before he’s seeking to make-up with Bong-Soon.

I was kinda disappointed over a few of the writers’ choices with these episodes. For one, the whole tracker in the necklace thing. From the writers’ standpoint, I can easily imagine coming up with a plot idea like that for several reasons… but objectively, it does feel odd that he’s literally tracking her without her knowledge or approval. I suppose if he told her, she would’ve removed the necklace after they broke up (to protect him from following her). But still. I also have a feeling that this issue isn’t going to be addressed in the show. I’m probably nitpicking at this point because the show has already shown several controversial things (like Bong-Soon’s mom’s domestic abuse of her husband) that are clearly (and sadly) here just for comedy or plot points.

At this point, it’s become very unclear what the kidnapper’s objective is. Revenge against Bong-Soon? Revenge against Min-Hyuk? Surprisingly, he didn’t seem very preoccupied with Gook-Du, who probably interfered with the baddie the most – punching him, threatening him, and even shooting him in the arm. Perhaps he planned to take out Min-Hyuk and Bong-Soon first and then go after Gook-Du.

The other thing I was a little discontented with was Bong-Soon not having an actual proper showdown with the kidnapper (so far). Early on in the show, I did wonder if Bong-Soon was really going to get the chance to take down the kidnapper or if it was going to fall to a different character. Obviously, Bong-Soon has had quite a few heroic moments from rescuing the kidnapped girls to saving Kyung-Shim from the lift, to finally saving herself (and Min-Hyuk) from the bomb. But in a superhero story, watching the villain and the hero have the final fight is a big deal. Of course, there’s still time for that to happen in the next episode. I’m just preparing myself if the show doesn’t follow my exact expectations and lets someone else, like Gook-Du, take him down instead.

How did you feel about this week’s episodes? Let me know your thoughts for Strong Woman Do Bong Soon in the comments!