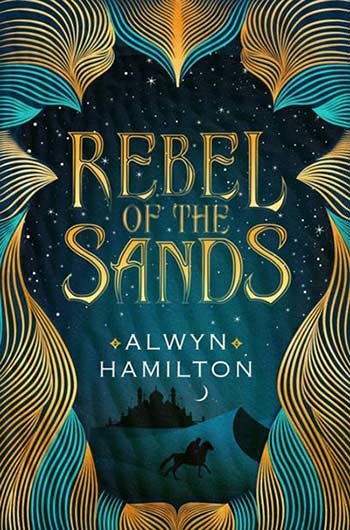 REBEL OF THE SANDS PUBLISHED BY VIKING BOOKS

In Rebel of the Sands, Amani Al’Hiza knows two things: how to shoot a gun and that she needs to get out of Dustwalk. Living in her uncle’s house with her many cousins, she is mistreated and shunned by most of the community, constantly reminded that she is an orphan, female, and marked with blue eyes. Amani’s world is of the desert, monotonous days that never seem to change.

But Amani has a plan to get out of Dustwalk, even with the monsters and beasts, First Beings and dijinn, that still roam the desert, no matter what the cost.

Rebel of the Sands opens with her entering a shooting contest, the prize money more than enough to get her a ticket out of the small town, and on a train to the capital city, where she might be able to find her aunt, her mother’s sister. Amani had disguised herself as a boy, knowing that even if she wins the contest, she will be in even more danger if she is caught in her disguise. But she also knows that she can best most of, if not all, the men in the town at shooting, and when a mysterious foreigner, a boy they called the Eastern Snake, shows up to the contest, she wonders if the odds are stacked against her.

When she makes it to the final round, along with the reigning champion and the Eastern Snake, the contest is interrupted by a boy crying out for rebellion. In Amani’s country, Miraji, the Sultan has a son that the people have nicknamed the Rebel Prince, for this Prince, Ahmed, is set to reclaim his throne that was stolen from him in a contest with his other brothers. The boy at the shooting contest is thrown into the ring to hold the target that the contestants must shoot. Amani and the Eastern Snake manage to convince the owner of the pistol pit to not use the boy as the target, but to switch off as the targets instead. When it looks as if the champion, who has been drinking heavily, might shoot the Eastern Snake, Amani knocks him out of the way and chaos ensues. She and the Snake manage to escape and part ways.

The next day, when Amani is minding her uncle’s store, the Snake reappears, with a bullet wound, and a horde of the Sultan’s soldiers looking for him, saying he has committed treason. Amani tricks the soldiers into thinking the boy has left town, and when they leave, she gets more of the truth from him. His name is Jin, and Amani gets the bullet out of him, asking to go with him, thinking it might be her way out of Dustwalk. Her negotiation with him is interrupted when there is a commotion outside over a Buraqi — a desert horse and a First Being — having wandered into town. Amani knows that only a woman can bind a Buraqi into mortality with iron and that having one could get her the money she needs to escape the town, so she throws herself into the melee and is victorious. But as she tries to escape, the army reappears and threatens to kill her if she doesn’t reveal where Jin is.

With moments to spare, Jin manages to steal the Buraqi and Amani jumps on, and they ride out of the town into the desert.

When they have left enough space between them and Dustwalk, they stop at a bar in a nearby town. Though Amani knows that Jin didn’t have to come back for her, she is torn about trusting him, and knowing that he could be feeding her nothing but lies. She decides to drug Jin and leaves him behind. Amani sells her Buraqi and gets a train ticket to Izman. Just as she thinks that she has left her old life behind, it catches up with her in an instant, when the soldiers looking for Jin and Jin himself show up on the same train. When Jin helps Amani to navigate past the army, who is now searching for her as well, she escapes with him into the desert. With no money, they decide to join a caravan walking across the desert to get to Izman.

Amani thinks she knows the desert, but it turns out the desert — and the Rebel Prince Ahmad — have more surprises in store for her.

Rebel of the Sands is an extremely well-executed novel, with great world-building and fast action. Amani is a wonderful protagonist, with a sharp tongue, and a faster hand with a gun. Her character is similar to Katniss of The Hunger Games series — resourceful and resilient — and her character keeps the pace of the novel thrilling. Jin is a good partner to Amani, with just enough secrecy to his character, so that the reader will keep guessing about his motives. They have great chemistry, with a few romantic scenes, set against the action. The novel is open-ended enough for a sequel, and readers will be clamoring to see what is in store for Amani.

Rebel of the Sands is made for the big screen. The desert plays such a large role in the story, and with the right cinematography, the scenery would flourish on film. I thought of the film version of The Black Stallion (which has a great screenplay from the incomparable Melissa Mathison) as I was reading. For Amani, I’d cast Summer Bishil (TV’s The Magicians, 90210) who could portray Amani’s tough quality, but also bring a sympathetic aspect to the character. As Jin, I’d cast Suraj Sharma (Life of Pi, TV’s Homeland), who could play up Jin’s mysteriousness and be a good romantic lead to Summer’s Amani!

Our romance-themed entertainment site is on a mission to help you find the best period dramas, romance movies, TV shows, and books. Other topics include Jane Austen, Classic Hollywood, TV Couples, Fairy Tales, Romantic Living, Romanticism, and more. We’re damsels not in distress fighting for the all-new optimistic Romantic Revolution. Join us and subscribe. For more information, see our About, Old-Fashioned Romance 101, Modern Romanticism 101, and Romantic Living 101.
Pin this article to read later! And make sure to follow us on Pinterest.
By Clarissa Hadge on March 22nd, 2016