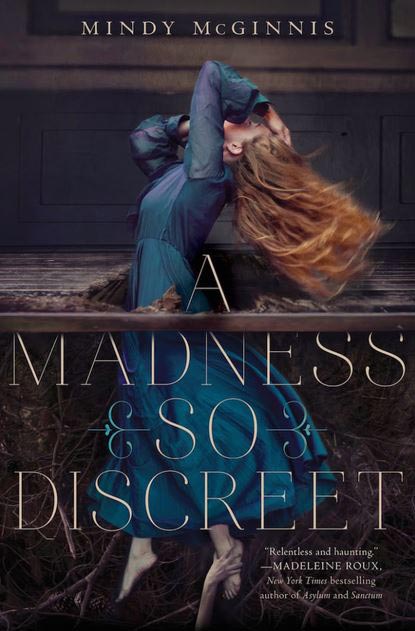 Spoilers for A Madness So Discreet – Publication October 6, 2015, from Katherine Tegan Books

Madness has many layers in this beautifully written historical fiction novel. The story begins in Boston, where Grace Mae has been deposited into an asylum, pregnant with child. Grace does not speak to anyone, in order to keep her thoughts, and keen, almost photographic memories, about how she ended up at the asylum at bay. But her mind is sharp, watching the other patients and staff within the confines of the building. The staff is cruel to their patients, treating them as less than human.

Grace is numb to their treatments, and has decided that it is better for her to stay in the asylum, holding a secret about her pregnancy, than try to return to the outside world.

A dinner with other patients deemed manageable enough to sit together for an evening without any outbreaks proves to be too much for Grace. She lashes out at the head doctor, Heedson, who triggers memories of how she came to be pregnant. Stabbing him in the hand with a fork, Grace is mistreated more severely than she had been previous, which causes her to lose the baby. She is sent to the cellar, to solitary confinement as punishment for attacking Dr. Heedson. In the cellar, another patient, Falsteed, befriends her, and as she allows herself to find some comfort in the dark despair, another doctor, Thornhollow, arrives at the asylum.

Unlike Heedson, Thornhollow does not abuse his patients but is called to perform brain surgeries on the more unruly ones. Grace overhears several conversations with Thornhollow and the ward of the cellar, Reed, and decides that she wants to undergo Thornhollow’s surgery, thinking that if the surgery is performed on her, then she will forget the terrible act that was done to her, and that she will not be forced to live outside of the asylum. However, Thornhollow, after several interactions with Grace, has other ideas. Seeing her sharpness and intelligence, Thornhollow convinces Grace that he can get her out of the asylum and out of Boston, away from everything she is looking to escape, without having to undergo the surgery. Tricking Heedson to think that Thornhollow has damaged Grace beyond repair with the surgery, and Heedson, fearing what Grace’s father — a senator — would do to him because of this, allows Grace to leave with Thornhollow. He tells Thornhollow that he’ll have to pretend that Grace is dead in order to save his own skin, and in the end, Grace and Thornhollow leave Boston behind.

The two journey to Ohio, to another asylum, one where the patients are treated far more humanely. Grace becomes Thornhollow’s assistant, under the guise of still being a patient at the asylum. Pretending that Thornhollow’s surgery has left her damaged, Grace plays the part well, and no one is the wiser. Two girls, Elizabeth and Nell, become her friends. Elizabeth — Lizzie — is in the asylum for talking to an imaginary friend she calls String, who feeds her gossip and secrets. Nell has syphilis, but a surprisingly positive outlook for her situation. As the girls become close, Grace is plagued with the guilt of leaving her own sister, Alice, behind in Boston, to possibly undergo the same fate that befell Grace herself. Though some ingenuity, Grace writes to Alice as an imaginary friend she played when they were younger. She sends the letter to Falsteed and Reed, at the Boston asylum, asking Reed to place the letter in her family’s garden, in the hopes that Alice will find it.

In Ohio, Grace and Thornhollow start to investigate a series of murders occurring only to women. Since Grace is deemed as insane, she is able to gain access to the murder scenes and glean information that which others wouldn’t necessarily be allowed access. Thornhollow admires her abilities to pick up on tells from people’s reactions, and as they investigate each crime, they try to piece together the murder’s motivations.

With few connections between each murder, save for how the victims are found — ankles crossed, eyes open, and hands folded — Grace and Thornhollow attempt to figure how why each woman was targeted, and get into the mind of the murderer.

From the actions of how the women were killed, Grace and Thornhollow suspect a doctor, and visit all the local doctors, to see if any of them fit the profile they have created from the clues at each crime site.

As they dive deeper into the case, the story only gets more interesting from there! Overall, Mindy McGinnis’s writing is exquisite in tone, making Grace’s world come right off the page. The details in which the murders take place are precise, without an overly gruesome quality. The friendship that Grace, Lizzie, and Nell have is a strong factor in helping Grace come to terms with what has happened to her, and I appreciated that their friendship plays such a pivotal role. Though the professional relationship that Grace and Thornhollow have could have easily fallen into a white knight-esque relationship, that is, Thornhollow rescuing Grace, they are treated more as equals, and verbally spare several times over the course of the novel. For readers looking for an explicit romance between the two, unfortunately, this is not present. But Grace and Thornhollow are such passionate characters, and the scenes where they’re arguing are depicted so well, it won’t disappoint readers! My only complaint is that the pacing of the novel is a little slow, but not to the point where it took away from the story.

A cover can sometimes make or break a novel, and I have to admit, I fell in love with this cover! Gorgeous!

A Madness So Discreet would be lovely on the big screen, in a macabre way, of course! The juxtaposition between Grace’s asylum life and solving the mystery with Thornhollow would be interesting to view, especially with the qualities of lightness and darkness as key elements throughout. The novel does have some similarities with An American Haunting (2005), though overall, it feels closer to a Jane Campion (Bright Star, The Piano) film.

For casting, I would put Rachel Hurd-Wood as Grace. She was wonderful in An American Haunting and Perfume: The Story of a Murderer (which also has a similar vibe to this novel) and could portray Grace’s madness and sanity with a quiet strength that she showed in the aforementioned films. For Thornhollow, Tom Hiddleston (I’m assuming we don’t need a film reference for this choice!) would be spot on, playing Thornhollow’s fits of brilliance and angst as only he can!

Lizzie and Nell plays significant parts, and for their characters, I’d cast Greer Grammar (from MTV’s Awkward) as Lizzie, and Maisie Williams (Arya Stark on HBO’s Game of Thrones) as Nell. Greer as Lissa on Awkward plays an airhead cheerleader, but with so much sincerity, you can’t help but root for her, and Lizzie has a naiveté that makes you want to hug her! Maisie Williams, as Arya, has shown viewers have seen that she can play tough (and sometimes scary!) but has a soft side to her, much like Nell does. For Grace’s father, I’d cast Michael Shannon (Nelson Van Alden on Boardwalk Empire and General Zod in the most recent reboot of Superman) because of his ability to be charismatic and charming, then turn 180 degrees and become a completely different character! His work in Premium Rush is a good example of this!

Our romance-themed entertainment site is on a mission to help you find the best period dramas, romance movies, TV shows, and books. Other topics include Jane Austen, Classic Hollywood, TV Couples, Fairy Tales, Romantic Living, Romanticism, and more. We’re damsels not in distress fighting for the all-new optimistic Romantic Revolution. Join us and subscribe. For more information, see our About, Old-Fashioned Romance 101, Modern Romanticism 101, and Romantic Living 101.
Pin this article to read later! And make sure to follow us on Pinterest.
By Clarissa Hadge on August 27th, 2015