Charlotte Bronte’s tale of Gothic romance and hidden secrets has delighted us for almost two centuries, including on the small and big screen. And because Jane Eyre is adapted every few years or so, there are many great versions out there to delve into (such as the 2006 Mini-Series). For this comparison, however, I’ve decided to focus on just a couple of the Jane Eyre film adaptations this time around. First up is  the 1996 version starring Charlotte Gainsborough, William Hurt and a young Anna Paquin. The second version is the 2011 film starring Mia Wasikowska and Michael Fassbender. I’m sure eventually there will be a latter article devoted to a couple of the mini-series available, but until then I have to say that both the 1996 and 2011 versions have their merits, including some fantastic acting. 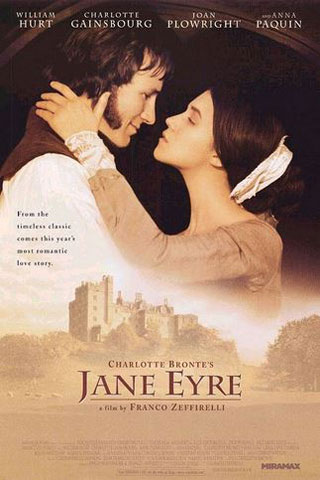 This was the first version of Jane Eyre I ever watched. I was impressed with Charlotte Gainsborough’s quiet portrayal of Jane and the depictions of harsh life at Lowood School and the place that Thornfield was filmed. It brought the scenes from the novel into live action in a believable way. As a comparison, I really liked the backdrop of this movie better. The focus on Jane’s childhood was another plus to the film. Although it was not in the book, I love it when Jane cuts her hair in solidarity with Helen. I like Jane’s acts of defiance because Anna Paquin is a total scene stealer as young Jane.

When it comes to the romance between Jane and Rochester, the portrayal was a bit milder in comparison to other adaptations. The romance is always intense in the novel, but I didn’t feel it as much onscreen. I did like Hurt’s raw reactions in the movie however. You knew when he suffered for instance. I just didn’t feel the romance as much. I did think it was highly romantic at the time until I saw other versions that is.

I also felt like this Jane Eyre was inconsistent in what it focused on and what it didn’t. For example, they emphasized her childhood but barely showed her time with St. John. This huge plot line in the book was just tagged on as an afterthought. As I previously stated, this was the first Jane Eyre adaptation I viewed and I still love it despite a few misgivings. 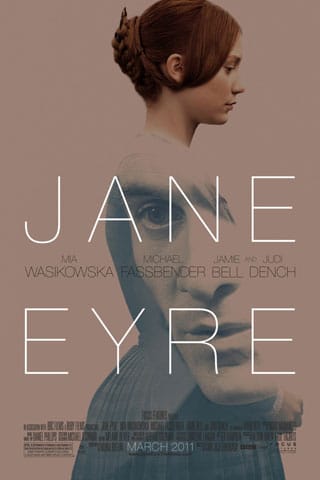 This Jane Eyre  focused on the feelings of the characters more, and not just Jane and Rochester’s either. This movie gives fair balance to each stage of Jane’s life. The film shared flashes of her most significant moments from childhood (i.e. Helen’s death, the Red Room). Her time at Thornfield was accurately portrayed and enough time was given to build the romantic plot. I even appreciate the way the story was told as I felt more sympathetic to Jane.

Then  there was the undeniable romantic tension between Jane and Mr. Rochester. Michael Fassbender’s Rochester didn’t have as many raw outbursts as Hurt’s, but you could feel the overwhelming emotions simmering underneath his arrogant facade. The scene after Jane saves him from being burned to death with that almost-kiss had me swooning a little. You could tell the two had a growing passion with palpable chemistry to root for. You could just feel their connection.

Aside from the love story, I liked the attention given to Jane’s interactions  with the Rivers family. You can see her happiness at discovering her new family and the awkward tension between her and St. John. This was an important growing period for Jane that deserved focus and was given more time to develop here.

On another note, the settings were pretty in the film but I think overall they were lovelier in the 1996 adaptation.

I have to say that the 2011 Jane Eyre is my personal favorite. I like the way her story was portrayed and the chemistry between Fassbender and Wasikowska’s characters. After comparing the two, I just feel more connected to the 2011 film. With that being said, there is one Jane Eyre miniseries that I like more than this film. Find out which in a later article….

Our romance-themed entertainment site is on a mission to help you find the best period dramas, romance movies, TV shows, and books. Other topics include Jane Austen, Classic Hollywood, TV Couples, Fairy Tales, Romantic Living, Romanticism, and more. We’re damsels not in distress fighting for the all-new optimistic Romantic Revolution. Join us and subscribe. For more information, see our About, Old-Fashioned Romance 101, Modern Romanticism 101, and Romantic Living 101.
Pin this article to read later! And make sure to follow us on Pinterest.
By Mandi Harris on July 30th, 2015

10 thoughts on “Which Version is Better? Jane Eyre Film Edition”