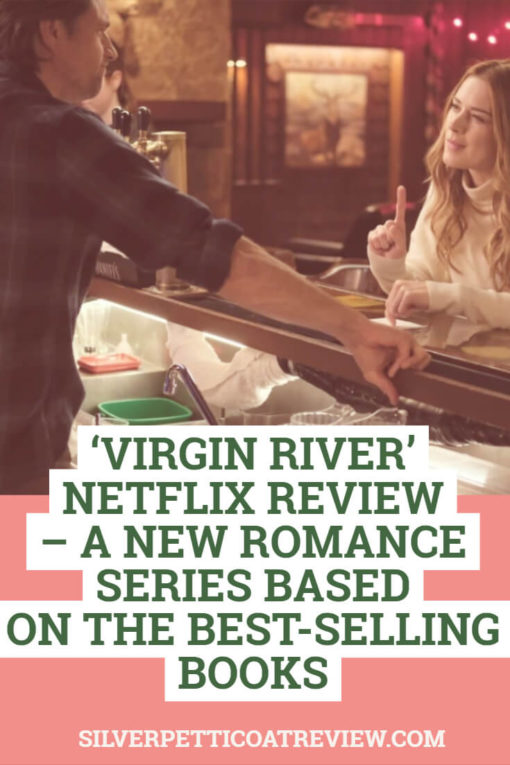 Based on the best-selling novels by Robyn Carr, the new Netflix series, Virgin River, premiered on December 6th. I’m three episodes in, and it’s already my new favorite show. Small-town charm, an egotistic Doctor, a modern-day chivalrous romance, and loveable characters…what’s not to love?

Melinda Monroe (Alexandra Breckenridge), a nurse practitioner, moves to the small California town of Virgin River under mysterious (and likely tragic) circumstances. But her new nursing job with a grumpy Doctor and her less than acceptable housing isn’t what she expected.

However, she soon befriends the local bar owner, Jack Sheridan (Martin Henderson), who’s interested in her romantically. Meanwhile, when a mother abandons her baby on the Doctor’s doorstep, Mel must decide to go or stay and help.

VIRGIN RIVER ON NETFLIX IS THE FUTURE OF ROMANCE

Strangely enough, Virgin River hasn’t received much promotion despite the spot-on casting and popularity of the books (20 in the series so far selling more than 13 million copies). No reviews have dropped on Rotten Tomatoes yet, and marketing has been minimal.

But then again, this is a romance series, focused on characterization and little action, not to mention a lack of profanity and cynicism. So, it’s no surprise critics aren’t giving it much acknowledgment.

Still, I think it’s high time romance is given the respect its due in the entertainment industry. You’d think filmmakers would notice how well romance (a misunderstood genre) sells in the publishing industry and find a way to translate that into entertainment beyond Hallmark and Lifetime. But alas, romance and the entertainment equivalent to women’s fiction continues to be ignored far too often.

In an interview with EW in 2019, Robyn Carr discussed this lack of romance in entertainment and how she and other romance authors feel about it.

“It’s long overdue. And I think we’re heartily sick of reality TV. We really want a good, solid story that we can relate to. Thank you, Reese Witherspoon, for saying women can do this. She’s doing it. We have been waiting. And we’ve been trying to encourage them to see the light.”

Well said! I couldn’t agree more. Many of us have been waiting for a long time for this change. And it looks like it’s finally coming. Virgin River is a step in the right direction. And Carr is right. Series like this are long overdue.

That said, based on the recent revival of rom-coms and Netflix’s success with romantic originals, not to mention the new Shonda Rhimes deal, I see a promising future. Virgin River is the picture-perfect example of how to translate the romance genre and women’s fiction successfully to the small screen.

A CONTEMPORARY ROMANCE TO LOVE

Now, unlike Gilmore Girls, it’s important to note that while Virgin River is in a similar category, it’s more of a straight-up romance series.  And it’s a fantastic one at that with potential for numerous seasons.

Virgin River on Netflix is just the right balance between heartfelt emotion and sentimentality with swoony romantic moments. Who wouldn’t want the modern-day equivalent of a Medieval knight (in the show, he’s a former marine) who listens to what you have to say and bends over backward to make you feel welcome? It’s like Luke Danes from Gilmore Girls meets Lancelot.

THE CHARACTERS AND CASTING

Which brings me to the excellent casting. Alexandra Breckenridge from This is Us stars as the protagonist, bringing a likeability to the role. She’s a woman we can all relate to. Her life hasn’t turned out the way she expected and now she’s looking to heal. In fact, the theme of healing and recognizing you need help is a prevalent theme in the series. So, it’s a welcome series to watch if you need healing or self-care yourself.

And then there’s Martin Henderson (Bride and Prejudice, Grey’s Anatomy) as Jack Sheridan, the local bar owner and romantic interest for Melinda. He brings his movie-star appeal and excellent acting chops to the production, making him a believable leading man.

To complete the casting is the always fabulous Tim Matheson (Hart of Dixie) as the older town Doctor who doesn’t want Melinda there. Then there’s Annette O’Toole (Smallville) as the outspoken and lovable town mayor fighting for Melinda to stay. And Colin Lawrence as John ‘Preacher’ Middleton, the quiet but gentle cook at Jack’s bar.

So, on top of the first-rate story and writing, everyone plays their roles expertly, quickly warming new fans to the series and characters.

Overall, Virgin River has more edge than a Hallmark movie but leaves you with that same uplifting feeling. Plus, Netflix’s adaptation of the popular book series is the future of romance in entertainment, and that’s something to be excited about as a romance fan.

So, if you love series like Hart of Dixie, Gilmore Girls, Cedar Cove, or Everwood, it’s the series for you. Virgin River is well-done with high production quality, good writing, relatable characters, and top-notch talent. It’s also the perfect peaceful escape from the hectic chaos of our lives, and I can’t recommend it enough. You can now stream the entire first season on Netflix.

Have you started watching Virgin River on Netflix yet? What are your thoughts on this new romantic drama series? Drop a comment below.