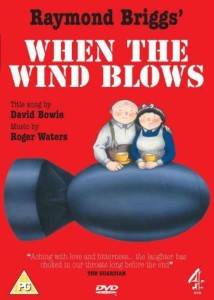 When the Wind Blows is a film directed by Jimmy Murakami and based on the book of the same name by Raymond Briggs, who also wrote the screenplay. From my understanding, the film seemed to do well at the box office in the United Kingdom. When it was released in the USA, it only played in a few theaters. The film was able to garner even more of a following in the USA later, thanks to VHS and DVD sales.

I had not heard very much about this film prior to watching it. The little I did know was mostly positive praise. Going into the film, I was excited to find out how it would tell a story that has been done so many times, nuclear war, differently. I was not expecting the film to be so poignant, touching and harrowing. In my opinion, it is possibly one of the most emotionally powerful and harrowing animated films that I have seen in quite a while.

The film tells the story of a retired elderly British couple named James and Hilda Bloggs. They live happily in a modest, immaculately tidy cottage in Sussex, not too far away from London, where their grown son lives with his wife and child. One day, James returns home with government nuclear war survival pamphlets. That night, war is declared and James, using the government pamphlets, works to prepare their home for the impending nuclear attack. However, as the film continues and documents this couple’s lives in painfully real detail, the audience witnesses just how futile their efforts are.

During the Cold War, several apocalyptic films came out illustrating the horrifying, frightening and devastating effects of nuclear war and the world with no future. When the Wind Blows stands out amongst these films a little more by focusing on the lives of a few people and confining the action to their home, thus making it even more emotionally effective. The film is told mostly from their point of view so we know as much as they know and that helps give the movie a subtle sense of suspense.

Though I do not think it is a film for everyone, it is an extremely sad story that is also poignant, moving and quietly terrifying all at the same time.

Though the subject matter of this film is dark, there is a fair amount of low-key comedic moments in the dialogue. For instance, James and Hilda bicker about what shirt collar would be best for James to wear when the bomb is dropped. Even their attempts to prepare for the disaster as they follow the absurd pamphlet instructions are amusing and charming. Once nuclear fallout really begins to take effect, this elderly couple’s characteristic eccentricity becomes more poignant and audience amusement is replaced by acute feelings of sadness, knowing that their preparations and optimistic attitudes are for naught. One example I can think of is shortly after the bomb goes off Hilda wants to clean up and do the dishes so what is left of their home can be presentable for when help arrives. The audience, however, knows that the probability of assistance arriving is slim.

When the Wind Blows has many themes & messages throughout. There is the main message of peace over war, which is what one would expect from an antiwar film. In addition, there are the messages of blindly following orders (James) and how individualistic people can be (Hilda) thus resulting in negative outcomes for everyone involved. The film also illustrates the flaws with “government prepared” advice on how to survive these situations, mainly in that not everything is explained or how one is to survive the event. The pamphlets discuss the fallout, but they do not explain why it is so dangerous. The fact that rainwater is deadly or the reason for waiting 48 hours before emerging from the shelter are never explained. These messages are not hammered in and feel natural in the setting of the film, which is something I always enjoy.

Though this film is not a musical, I personally really enjoy the soundtrack and I think it helps with the film’s emotional impact. The score is composed by Pink Floyd co-founder Roger Waters and the title song are written and beautifully performed by David Bowie. (I personally adore the music from these people so I was pleasantly surprised when I first heard them in this movie). The music also helps bring the film’s main message of peace into the forefront without being distracting.

Since the film’s focus is on this one elderly couple, it would stand to reason that they would be the most developed. They are also really the only characters we see. James and Hilda are traditional, optimistic people with the up most faith in their queen and country’s ability to take care of the people, just as it was in the days of Winston Churchill. These ideals allow the couple to remain calm and continue even until the bitter end, which is another aspect of this film that is so heartbreaking. One could also make the argument that in their old age, their memories of WWII and their perceptions of people are skewed. James is quite a talker and enjoys telling stories and reminiscing. Sometimes, he travels to London to read the newspapers in the library so that he may be informed of what is going on in the world. Though he was never a soldier, he often daydreams of doing things of importance.

Hilda keeps everything in the house looking nice. She cleans, washes, irons and sews. She is content with her life and is happy to have her husband. She is also very naive and is not as knowledgeable about the happenings of the world as her husband. Her naivety is illustrated in comments such as “I liked Stalin, he was a nice chap.” She enjoys reminiscing about her life during WWII and often compares it to what she is facing during the film. Like her husband, she daydreams of better things, happier things, even things of a passionate nature.

James and Hilda’s relationship is very realistic and quite endearing. They possess years of warm familiarity and gentle affection with each other. Through a series of photographs, the audience also gets to see how they met, their marriage, and several moments of their lives together. I especially like how it was all done through the visuals, as film is a visual medium, with no dialogue and it helped the audience get to know these people even more. I found their relationship very sweet, even when they suffer through some of the worst effects of radiation.

Some could view the couple as unintelligent, as they do a few things one is not supposed to do after a nuclear attack, but I think it is about being in deep denial about the reality of their situation. From James’ ludicrous excuses to their physical woes to Hilda’s assertion that the postmen will start delivering mail again any day now, all help illustrate their physiological states regarding their death and the death of all the world.

Aside from a few live action shots and images to give the film a more realistic feel, the film is entirely animated. Richard Fawdry is responsible for the animation and layout design. The film has two different forms of animation, which gives it a very distinct look. Hilda and James are created using traditional 2-D animation with lovely water colored backgrounds outside their house. The character designs are simple, but remind me of illustrations one would find in children’s story books. This simplistic art direction allows the film to have an even greater impact because it is entirely at odds with its difficult and dark subject matter. The daydreams and memories James and Hilda have are also animated beautifully with a combination of thick, swirling lines and sketchy lines as well as eye pleasing colors.

The inside of the house is made up of real objects that rarely move, but when they do, they are animated with the use of stop-motion. For the most part, I thought the 2-D animation and stop motion animation interacted with each other well without looking too out of place. I did notice a few inconsistencies here and there, but it is not enough to diminish my enjoyment of the film. One can tell the animators were dedicated and diligent in their work to make the world of the film look unique despite the confined setting. Many agree their work paid off.

When the Wind Blows is a memorable animated film with a real emotional punch and subtle themes. I would recommend this film to people who enjoy war films, period dramas, and cautionary tales. Though I do not think it is a film for everyone, it is an extremely sad story that is also poignant, moving and quietly terrifying all at the same time. If it sounds like something you would be interested in, then find a copy and give it a watch.

Content Note: This film would likely be PG-13 if rated. There is brief strong language, disturbing thematic content and some sexual imagery.

Our romance-themed entertainment site is on a mission to help you find the best period dramas, romance movies, TV shows, and books. Other topics include Jane Austen, Classic Hollywood, TV Couples, Fairy Tales, Romantic Living, Romanticism, and more. We’re damsels not in distress fighting for the all-new optimistic Romantic Revolution. Join us and subscribe. For more information, see our About, Old-Fashioned Romance 101, Modern Romanticism 101, and Romantic Living 101.
Pin this article to read later! And make sure to follow us on Pinterest.
By Moriah Burbank on August 23rd, 2015

1 thought on “Vintage Film Review: When the Wind Blows (1986) – A Nuclear War Tale from a Different Perspective”