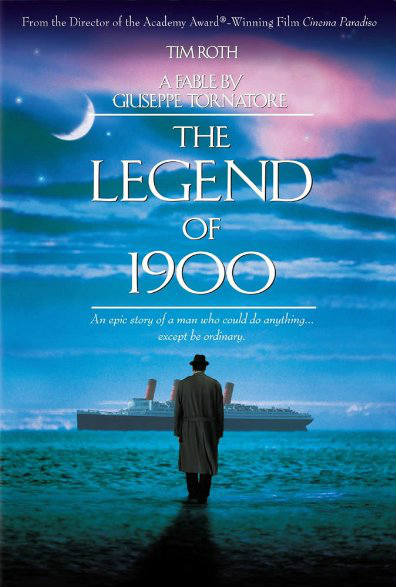 The Legend of 1900 is written and directed by Giuseppe Tornatore, who also directed and wrote the Academy Award winning Cinema Paradiso, and is based on a monologue by Alessandro Baricco. The film takes place mostly on a ship and spans over forty years. It lacks the usual Hollywood conventions: no black and white good guy and bad guy struggles, no sexual or violent content and no crude jokes. The most graphic thing it does is the use of profanity, which is what gives the film its R rating. It is a film unlike most that I have seen.

A retiring trumpet player named Max is in the process of pawning his trumpet. While at the pawn shop, he comes across a very special record and regales the owner of the store with the story of the pianist on the record and his best friend known as 1900. His full name is Danny Boodmann T.D. Lemon 1900. He was found abandoned as an infant on the luxury liner Virginian, which carries people from Europe to America and vice versa, by a man named Danny Boodmann, in a lemon box, in the year 1900.

1900 is raised in the engine room of the ship by his adoptive father. 1900 vows never to leave the ship he calls home, lest some immigration authority cause trouble for them both. Over the years, the child listens to and learns from the music of all the different cultures that are migrating from the Old World to the New World. As he grows up, his listening skills sharpen and he develops an extraordinary talent for playing the piano. When 1900 grows up, he has become a permanent resident and entertainer upon the ship, entertaining and charming the passengers with music, in the words of Max, “that’s never been heard before.” Rumors of his talent continue to circulate and he eventually gains the attention of record producers, news reporters, advertisers, and even Jelly Roll Morton, the father of Jazz.

The art of film is about transporting the audience to another world, another place, another time and into the world that is presented to them upon the screen. It is my view that The Legend of 1900 accomplishes this goal beautifully as I was completely swept away from the moment the infant 1900 was found. When watching this film for the first time, I honesty did not know where it was going and it constantly made me guess. Personally, I love movies that can do that and found it all the more enjoyable. It is not a realistic story nor is it filled with historic accuracy. It is advertised as a fable and such a label fits perfectly with its larger than life story and characters with emotional exaggeration. Some people found the story to be overly sentimental and I can understand why. However, at the same time I cannot deny that there are moments of wonder and magic, with great atmosphere and the palpable tones of sadness and loss that are present throughout the film are quite effective.

One of the film’s strengths is the music. The score of the film is composed by Ennio Morricone and it is, in a word, magnificent. The music helps tell the story, adds to the atmosphere and helps portray the various emotions felt by the characters. For instance, in one scene 1900 is playing a piano and when he looks up through a porthole he sees a lovely Italian immigrant woman on the other side, though she does not see him. The moment 1900 sees her, he is instantly inspired to play a beautifully haunting piece, right off the top of his head, that perfectly illiterates the beauty he sees in this woman and the new feelings she sparks within him. This entire scene is done with no dialogue and despite that it communicates the characters’ emotions impressively. There are many scenes like this throughout the film and each one carries with it an emotional weight and lasting impact.

The film is also beautiful to look at with several stunning sequences. It cannot be denied that Tornatore is a director who knows how to add whimsy and flair to his scenes. There is one sequence, for example, when a child 1900 sees a grand piano for the first time through a glass window. The image is at first blurry and disjointed but then becomes clear as 1900’s understanding of what he is looking at and what he wants to do becomes clear.

There is another sequence which details the first meeting of Max and a full grown 1900. The ship is tossing and turning due to a furious storm. Max is the newly recruited trumpet player for the ship’s band and is feeling quite sea sick. While he is stumbling around the corridors he meets 1900 who walks around the ship effortlessly as it is moved by the ocean waves. 1900 leads Max to a ballroom and convinces him to unhook the piano from what anchors it to the floor. As the chandelier swings and chairs are thrown about, 1900 sits at the piano, with Max at his side, and plays while the piano rolls around the ballroom floor wildly. My poor description does little justice to one of the most creative and memorable scenes in the entire film. Not only is this scene visually impressive but it also bonds the two main characters as friends because after this experience Max is no longer sea sick. It also illustrates to the audience as well as Max just how comfortable and at home 1900 is on the ship.

There are two primary characters in this film: 1900 and Max, played wonderfully by Tim Roth and Pruitt Taylor Vince respectively. Max is the narrator of the film so the audience sees events mostly from his point of view. He is a loyal friend to 1900. In addition, he interestingly serves as a bridge between the world of the ship and the world off the ship for 1900. Often throughout the film, Max is a source of much needed comedic relief. Max fulfills his roles admirably though I personally would have liked a little more background information on his character.

1900 is an interesting and enigmatic character. He is both sophisticated and innocent. He is sheltered from the larger world off the ship but at the same time meets many people around the world through each voyage of the Virginian. He is mild mannered and painfully shy, despite his more extroverted persona when he plays in front of people. He is also quite humble and remains that way even when people take note of his talent and he becomes better known off the Virginian. This aspect of his character is beautifully demonstrated during his piano dual with Jelly Roll Morton when he swells with pride and appreciation for his opponent’s talent and proclaims that he is the best. 1900 adores music, lives through it and can truly express himself and his emotions only when he is sitting at the piano keys. It is here when he feels the most joy, content and freedom. The music that he makes on the piano keys is infinite and he is content to live by that. 1900 has no desire to leave the ship for fear of all the changes dry land will bring. It is my personal interpretation of the character that 1900 is a representation of the fear of change in all of us.

Similar to The Red Violin, The Legend of 1900 has some pacing issues. The pacing is rather slow and there are moments in the film that seem to be longer than need be. I can understand if some people find themselves irritated with the pacing. The film also has an episodic narrative structure and it does not quite feel as if it is whole movie about the life of this one man. Another problem that some people had with the film is a lack of emotional connection to the characters. Obviously, I disagree with this view but it is still something to be aware of. Clearly, this is the kind of film that is not for everyone but if one is willing to be patient with it then perhaps one could find something in it to enjoy.

Overall, I really enjoyed The Legend of 1900 and would recommend it to people who enjoy slower paced films with plenty of atmosphere and music and or if one enjoys the performances of Tim Roth. Ultimately it is a film about overcoming and not overcoming the fear of change and explores the emotions of several experiences in the day to day life of 1900. It may not have a similar emotional intensity as Giuseppe Tornatore’s other films or be a perfect movie, but in my view it is memorable and will have one pondering the beauty and wonder that it possesses. If it sounds like something you would be interested in, give it a watch and see for yourself.

Content Note: There is quite a bit of bad language in the film, so be aware.

Our romance-themed entertainment site is on a mission to help you find the best period dramas, romance movies, TV shows, and books. Other topics include Jane Austen, Classic Hollywood, TV Couples, Fairy Tales, Romantic Living, Romanticism, and more. We’re damsels not in distress fighting for the all-new optimistic Romantic Revolution. Join us and subscribe. For more information, see our About, Old-Fashioned Romance 101, Modern Romanticism 101, and Romantic Living 101.
Pin this article to read later! And make sure to follow us on Pinterest.
By Moriah Burbank on May 18th, 2015