Guess Who’s Coming to Dinner? is a drawing room comedy/drama written by William Rose and directed by Stanley Kramer. Most of Kramer’s films broach serious, socio-political subjects such as racism, juvenile delinquency, bigotry, fascism, and McCarthyism. Some view his films as powerful, thought-provoking, challenging and hard-hitting while others find them preachy, manipulative, middlebrow and heavy-handed. I suppose it depends on one’s disposition. 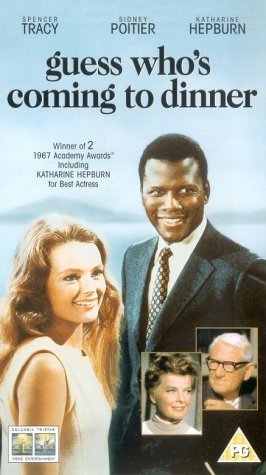 Guess Who’s Coming to Dinner? continues Kramer’s blunt, liberal messages at a more personal level with characters he wanted moviegoers to relate to. Guess Who’s Coming to Dinner? was one of Hollywood’s first and most successful films about interracial romance. The film not only has historical significance but was also the last film Katharine Hepburn and Spencer Tracy did together before his death.[1] This, no doubt, added to the film’s poignancy and commercial success at the time of its release.

Thanks to recent films like Selma, modern audiences can grasp the horrors inflicted upon those in the Civil Rights Movement and understand the necessity of it in the first place. The film was released in 1967 and while it was in cinemas, Martin Luther King was assassinated. This was most certainly a different time, and I think this is one of the many films that helped change and shape people’s opinions of African Americans for the better.

The liberal and progressive beliefs of parents Matt and Christina Drayton are put to the test when their daughter Joanna comes home from vacation in Hawaii with a distinguished and incredibly intelligent African American doctor, John Wayde Prentice Jr. They met in Hawaii, fell in love and want to marry. Katharine’s mother takes this news well and is just as excited about it as her daughter. The father, however, has mixed feelings and he must make a decision of whether to approve or not before Sidney flies to Geneva that evening. Things get even more complicated when Sidney’s parents are invited to dinner and the two families must confront each other and make decisions regarding the marriage of their children.

Some could say the deadline is contrived and artificial though such a thing is a standard of drawing room comedies. The deadline personally never bothered me. It allows for suspense to build and the film to move at a brisk pace as the clock ever ticks away. The film kept me enthralled from beginning to end, and I personally found it to be immensely entertaining. I wanted to know what would become of this couple and how this interesting story would end.

Speaking of the main couple, I liked their romance. Though we do not see the beginnings of it or what went on while they were in Hawaii, I still felt a genuine connection between Joanna and John. They had great chemistry and I did find myself rooting for them during the entirety of the film. Though there is a part of me that wanted to see more of their romance than the film depicts, it was still enjoyable. Moreover, I have always adored interracial romances and couples from different cultures and countries coming together. I like watching their interactions and seeing what they can learn from each other.

An additional strength of this movie is the dialogue. It is sharp, witty and filled with philosophical conversations about love, hate, and, of course, racism. It manages to have an emotional punch and cleverness to it without becoming preachy. There are many quotes throughout the film that I found quite effective. I remember many of them long after the credits roll and use them sometimes when I feel the need. It is undoubtedly a very quotable movie.

The themes of the film are obvious for the most part. Through the interactions of the two sets of parents and young lovers, racism is explored and examined, but it is done so alongside comedy ranging from clever word play, sight gags and cynicism to irony. Even internalized racism is touched upon through the Drayton’s maid Tillie. She is of the mindset that people should stay where they belong in society, and she dislikes anyone who acts “above himself.” It seems as though the film is not only trying to get the parents to accept the marriage but also to convince the audience to accept the marriage. The film succeeded in that goal if its box office numbers are any indication.

The film also has a more subtle message about threatened masculinity, mainly with the two fathers. Mr. Drayton must grapple with whether or not he feels inadequate as a man, and Mr. Prentice must resolve his own inner conflicts involving his views of other races and his feelings of inadequacy.

Lastly, the film is about the importance of change and it’s natural role as humans evolve. Change is natural and it is inevitable, and traditional expectations, masculinity and fear of it will not stop it from happening, or stop the brighter future that awaits everyone.

I enjoyed the characters, for the most part, even if a few of them seemed a little too perfect to be real. The acting is superb, especially from Hepburn and Tracy. Their chemistry and familiarity with each other is as strong as ever, and I could feel the love they had for each other, particularly when they speak of love and what it feels like to be in love. Something tells me it was not just acting. Hepburn plays Christina who owns an art gallery and has been a supporter of civil rights all of her life. After the initial shock of her daughter wanting to marry, she is accepting and excited. She is confident that she and her husband raised their daughter well enough to handle the challenges that will undoubtedly come from marrying a man outside her race.

Tracy plays Matt who is a wealthy and very liberal San Francisco newspaper publisher. He has spoken out for racial equality and civil rights all of his adult life. According to Kramer, when he was developing the character he thought to himself, “‘What a sorry sight to see a front-line liberal come face to face with all his principles right in his own house.’ I also thought, ‘What a perfect situation for a picture for [Spencer] Tracy.’”1 Not only is Matt dealing with these thoughts, but he is also concerned that his daughter is making an important life decision too hastily, and he worries for the potential lives of their future children. In my opinion, these kinds of anxieties make sense. 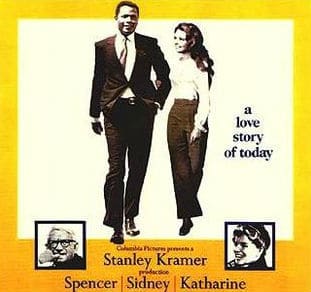 Joanna is a sweet and innocent young college woman. According to her parents, she has been a happy person for the majority of her life, as a baby, as a child, as a teen, even in college. She is an optimistic person and she can see the good in everyone. She is also headstrong and resolute in her decision to marry John, no matter what her parents say. Such determination and devotion to the one she loves is admirable.

John is an intelligent, noble, wealthy, ethical doctor who serves on United Nations committees when he is not tending to patients in other countries. Some could easily argue that he is too perfect to be a convincing character. I can understand where these criticisms are coming from, and I think if he had more flaws it would lead to even more interesting character interactions. However, I can understand why the writers did this, especially when one takes into account the time of the film’s release. It is easy to imagine white audiences in the ’60s not accepting this character if he were anything less than perfect. I will admit it is one of the aspects of the film that has not aged well, at least in my opinion.

I found John’s parents, known as Mr. and Mrs. Prentice, to be quite believable and enjoyable to watch, especially their interactions with Joanna’s parents. Mr. Prentice is a retired mailman who lives in Los Angeles with his wife. He is kind and loving but also hard-working, and has made many sacrifices for his son. Mrs. Prentice is extremely sweet and kind but also observant, thoughtful and intuitive.

The minor characters are, unfortunately, more stereotypical. For example, there is an Irish priest who always has twinkling eyes and often has a drink in hand. Then there is the African-American maid of the Draytons named Tillie who is very much like every other maid in this kind of role that we have seen in other films.

Some could say watching this film in the 21st Century results in the movie coming off as too sentimental, artificial and even a little trite. However, for all its flaws, there are some things to like about it, and it still holds up as an enjoyable piece of entertainment. It captures a time and attitudes of an era that was still undergoing a massive social change and adjusting to that change.

I recommend this movie to any Tracy and Hepburn fans, romance fans and anyone looking for a socio-political film with humor and biting dialogue. Guess Who’s Coming to Dinner? is among films like In the Heat of the Night and To Kill a Mockingbird as significant movies that helped change the views and race relations of the western world for the better.

What are your thoughts on movies that deal with social issues like race? What other films do you think tackle these kinds of issues well? Sound off below…

Interested in watching more classic films? Take a look at My Journey Into Old Movies.

Our romance-themed entertainment site is on a mission to help you find the best period dramas, romance movies, TV shows, and books. Other topics include Jane Austen, Classic Hollywood, TV Couples, Fairy Tales, Romantic Living, Romanticism, and more. We’re damsels not in distress fighting for the all-new optimistic Romantic Revolution. Join us and subscribe. For more information, see our About, Old-Fashioned Romance 101, Modern Romanticism 101, and Romantic Living 101.
Pin this article to read later! And make sure to follow us on Pinterest.
By Moriah Burbank on September 30th, 2015