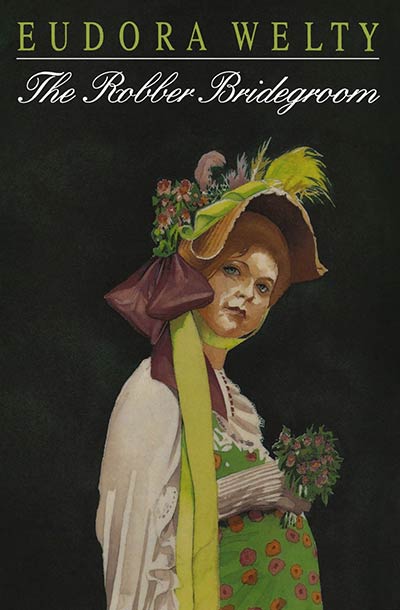 Legendary figures of Mississippi’s past – flatboatman Mike Fink and the dreaded Harp brothers – mingle with characters from Eudora Welty’s own imagination in an exuberant fantasy set along the Natchez Trace. Berry-stained bandit of the woods Jamie Lockhart steals Rosamond, the beautiful daughter of pioneer planter Clement Musgrove, to set in motion this frontier fairy tale.

“For all her wild, rich fancy, Welty writes prose that is as disciplined as it is beautiful” (New Yorker)

After being privileged enough to recently see the new (and absolutely amazing) revival of the musical of The Robber Bridegroom on Off-Broadway, I loved it so much that I bought the book it was based on that very same day. I mean it had everything I loved: a handsome, roguish lead as the bandit Jamie Lockhart, the princess like character singing in her “tower” and dreaming of something better, a romance to root for, and a wicked stepmother that had me in stitches the entire time. The clever way the musical incorporated several fairy tales at once colored me intrigued. So, then I sat down to read the very short novel (one could almost call it a novella), and while it was good, I admit to loving the musical a whole lot more. That being said, this loose adaptation of a Grimm folktale is definitely worth reading.

The story, while semi-slow at first, is a Southern folktale novel that follows the bandit Jamie Lockhart’s plans to steal from the plantation owner, Clement Musgrove, after saving this man from being killed and robbed. Clement Musgrove, being so thankful to his savior, invites Jamie to his home to meet his daughter, the beautiful Rosamond (he wishes the two to become betrothed) and wife, the ugly Salome. Jamie, with riches in his head, agrees wholeheartedly. 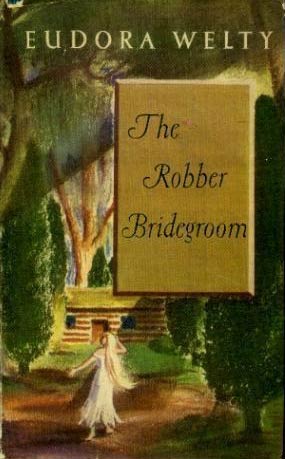 Back at Clement’s residence, Rosamond is beloved by her father and hated by her evil stepmother who plots her attractive stepdaughter’s death. While on a walk in the woods, gathering herbs for her stepmother (Goat, hired by Salome, following her to push her off a ravine if an opportunity arose), she runs into a bandit in the woods, his face covered in berry juice so as to make him unrecognizable. Seeing her lovely dress, the bandit has her take it off and steals it from her. This is where the novel really picks up.

At first, no one believes Rosamond’s ridiculous tale (as she had a predilection for lying), but soon they come to realize she is telling the truth and who better to go after this bandit and protect Rosamond’s honor than the handsome Jamie Lockhart? But in this fairy tale about mistaken identities, Rosamond soon gets briefly kidnapped by Lockhart (unaware he is the bandit) and the two begin to fall in love after he steals her ‘virtue.’ Not knowing the bandit’s identity, she meets Jamie Lockhart without all the berry juice on his face and makes herself unattractive to keep her new suitor away. Jamie, of course, wants nothing to do with this strange daughter, except marrying her for the money. The comedy here created by Eudora Welty is natural and very funny though it translates better on stage.

Meanwhile, Rosamond takes off to live with the bandit and his band of robbers but never sees his true face. With a murderer soon in their midst and an angry Indian tribe, things get even more complicated from there.

What is so wonderful about The Robber Bridegroom is the brilliant way Eudora Welty combines fairy tales. While based on “The Robber Bridegroom” by the Grimm brothers, this is definitely not an exact adaptation of that folktale. In the Grimm version, the bandit is more a murderous Bluebeard than an endearing bandit falling in love. Indeed, in Welty’s novel, she combines several fairy tales to make the novel more romantic, funny and an enthralling read. Adding the evil Salome into the mix gives the book a definite Snow White feel, with the stepmother plotting the death of her more beautiful stepdaughter. Goat, while a bit of a moron, then plays the part of the huntsman and Jamie’s band of robbers the dwarves that Rosamond cares for. Traces of Cinderella, Goose Girl, and more notably, Cupid and Psyche also appear (such as not seeing Jamie’s face), and the consequences that follow when Rosamond breaks her lover’s one rule.

Aside from her gifts with telling a fairy tale (and Americanizing them in Tall Tale fashion), Eudora Welty has a striking gift for prose and language (she would later go on to win the Pulitzer Prize). She captures the essence of the old Mississippi and meshes this history with exaggeration and fantastic fairy tale seamlessly. The irony and surrealism written into the pages of Welty’s fairy tale only work to add more depth to the story even though, like many fairy tales, the characters remain mostly static in a purposeful kind of way.

Still, as this was written in 1942 and takes place during the late 18th century, traces of sexism and racism feel very present. With modern eyes, some aspects of The Robber Bridegroom will make you extremely uncomfortable. Anything to do with the Indian tribe including a VERY disturbing murder of an Indian girl made me queasy. But, like I said, take into account when the book takes place. Don’t look at this with a contemporary perspective.

Overall, if you love fairy tales and want to read something different than another retelling of Cinderella, give this short classic a chance. Welty truly creates a wonderful American fairy tale that is still remembered for a reason.

The Robber Bridegroom really met its match when adapted into a musical in 1975. A recent revival came out this year and got even better with a stronger focus on the comedy and romance. The bluegrass southern musical takes out some of the unpleasant darker parts of the novel (such as the Indian girl’s murder) and focuses more on the atmosphere, fairy tales (with an even stronger comparison to Snow White), and satire. The new revival is just about a perfect adaptation; one I would love to be seen turned into a feature film.

As for casting, who better than Steven Pasquale to play the lead in the film as well as the stage? No, seriously. This up and coming actor played Jamie Lockhart flawlessly and with such humor and dreamy charisma that I can’t imagine anyone else but him for the role. The same can be said for Leslie Kritzer as Salome who basically stole the show with her talent for physical comedy. As for Rosamond, if they didn’t pick the actress from the revival who I also liked, I would love to see Amy Adams in this part. If the director wants to go younger (as is sadly often the case), then I would go with the red-headed singer/actress Bella Thorne (The Duff; Shake it Up).

What do you think about The Robber Bridegroom? Sound off below…

Our romance-themed entertainment site is on a mission to help you find the best period dramas, romance movies, TV shows, and books. Other topics include Jane Austen, Classic Hollywood, TV Couples, Fairy Tales, Romantic Living, Romanticism, and more. We’re damsels not in distress fighting for the all-new optimistic Romantic Revolution. Join us and subscribe. For more information, see our About, Old-Fashioned Romance 101, Modern Romanticism 101, and Romantic Living 101.
Pin this article to read later! And make sure to follow us on Pinterest.
By Autumn Topping on June 1st, 2016