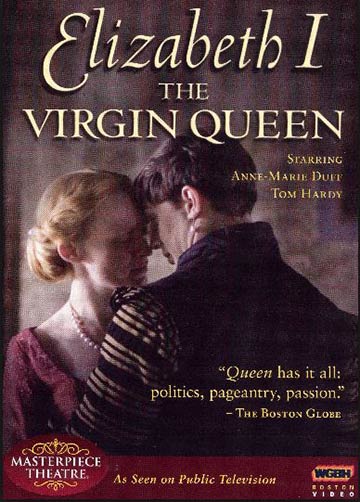 Elizabeth I: The Virgin Queen Review

“I will have but one mistress here, and no master! Do you hear me? I will have no man rule over me!” storms Elizabeth Regina I to Robert Dudley as they have yet another passionate disagreement. This actual quote from one of the most famous queens in history is a wonderful way to sum up the intensity, majesty and conflict in this fantastic 2006 Masterpiece adaptation depicting her ascent to the throne until her death.

Elizabeth was known for her cleverness, her vanity, her wily ways and her complex relationships. The role is loaded with opportunities for an actress to show her range, and Duff carries it all off magnificently. In scenes where she is the proud monarch exacting her will on the men around her, she is regal, proud and intimidating. When her Privy Council tries to push her into marriage with her many eligible suitors once too often, she walks proudly into court and announces that she will do as she pleases because she believes it’s the will of God, and they never can fully hold her to their will despite all their efforts. Even when she is older and frail in body, she still rules with conviction.  Each time she power walks from her chambers with purpose, it seems quite reasonable that everyone else should step back and drop a curtsey before this commanding woman.

The Virgin Queen also spends considerable time showing the other vulnerable side of this queen as well.  “A woman ruler is not as other women, is she?” she tells Robert Dudley.  “Like the coin that bears her image there are two sides to her. On the one, she embodies the feminine frailty of her sex, and on the other she is the body politic ordained by God.” I don’t know about frailty, but we see this Elizabeth struggling with her everyday burdens and feel for her.

The mini-series often shows her dreams which sometimes have her standing alone surrounded by hostile stares from members of the court whispering about her mother (Anne Boleyn) the whore. Worst of all are the cold, disapproving glares of her half-sister Mary and her demon-eyed father Henry VIII. Duff shows her throughout her life biting nervously at her fingers as she tries to deal with stressful decisions.  When she is urged to accept a suitor by her loyal advisor Sir William, she stalks away from him and goes off to a secluded part of the palace to scream and pace while she thinks and composes herself. When she’s next with Sir William, she is quite composed and able to cleverly put off his entreaties once more. At other times, her temper gets the better of her, and she sometimes physically strikes out even at good friends.

I love seeing her vanity and her insecurity. When the envoy from Mary Queen of Scots observes that Mary is a few inches taller than the queen, she replies airily that then Mary is too tall because she has been told she is the perfect height. Yet in private, she looks despairingly at the rival queen’s portrait and is close to tears when she realizes she may have to give up Robert Dudley to her as a husband.

It is, of course, the queen’s relationships that make this the fascinating drama it is, and Duff is surrounded by some excellent actors who support her so well. As her advisor Sir William, Ian Hart is strong and loyal and is the person I’d want at my back if I’m ever made the queen of anything. Kevin McKidd, her self-important cousin, the Duke of Norfolk is appropriately condescending, ambitious and full of inner rage and dislike.

The queen’s relationships with the women in her life are also telling and interesting. I love Tara Fitzgerald as Katherine Ashley, the queen’s most loyal lady who stays with her and comforts her when they are imprisoned in the Tower, fearing constantly for their lives. She even nurses her when she is gravely ill but feels close enough to scold her when she finds that the queen’s behavior might cost her the crown. The queen often tells her, “Stay close Kat,” and these actresses give us no doubt that these are two friends bonded forever. Sienna Guillory as Lettice Knowles has a more problematic relationship with the queen as she grows more jealous of her Lady until she is pushed to do the unthinkable.

Of course, the most influential association of the queen is her relationship with Robert Dudley, played by Tom Hardy. Dudley is the queen’s childhood friend and the love of her life. It is well documented that in real life, Dudley was close to the queen like no other, and there seems to be clear evidence that they loved each other despite the constant turmoil between them. Rumors were rife about them everywhere. The queen showered him with expensive gifts, and there was talk that he had taken “liberties” with her.

The film spends a lot of time on this, and their tumultuous romance is one of the things I love most about this mini-series. The queen describes “Robbie” as her “only joy,” and the tension between them is keen. She cannot help being drawn to him and being close to him, tormenting and comforting herself with his presence. She forgives him again and again because she can’t give him up though she is urged to many times.

Tom Hardy as usual is excellent here, fresh-faced, charming and impish; he of the sensuous lips is always ready with bold advice and a boyish smile whenever he needs to convince Elizabeth of anything. Yet there are dark undercurrents to his interest in her. He is not above being deceitful to keep himself in the queen’s good graces. He neglects his wife to spend time with her, explaining to this poor lady that it’s necessary that he stays close to make sure that they continue to benefit from Elizabeth’s power. At one point, after one of their many disagreements, the queen falls dangerously ill and names him protector of the throne, Dudley goes to the empty throne room and sits in the chair which is now his, a delighted smile on his face, but over several seconds his expression changes as he begins to realize what his power may cost him in the loss of his “Bess.” He doesn’t speak a word, but the nuances in his face are mesmerizing. Duff and Hardy have such a powerful chemistry that we clearly understand why the queen feels she cannot entirely separate herself from him, even though she knows marrying him can be her downfall.

If you’re still not convinced that you need to drop everything and watch this mini-series right now, I must add a word about the excellent makeup and costumes. The transformation of Anne-Marie Duff from a young woman to an elderly one is very well done. In addition, the musical score entrances you. Several songs are by the ensemble group Mediæval Bæbes who sing haunting songs at intense and suspenseful moments in the film. This is not a score that can be ignored. It truly raises the emotion every time it is used. If you love soundtracks, this might be one you would want to hear again and again.

Tarry no longer friends, I suggest that if you have an interest in period drama and romance, Elizabeth I and the history of the time, you need to see The Virgin Queen right away. It’s available to stream on Amazon Prime.

Our romance-themed entertainment site is on a mission to help you find the best period dramas, romance movies, TV shows, and books. Other topics include Jane Austen, Classic Hollywood, TV Couples, Fairy Tales, Romantic Living, Romanticism, and more. We’re damsels not in distress fighting for the all-new optimistic Romantic Revolution. Join us and subscribe. For more information, see our About, Old-Fashioned Romance 101, Modern Romanticism 101, and Romantic Living 101.
Pin this article to read later! And make sure to follow us on Pinterest.
By Dixie-Ann Belle on October 14th, 2015